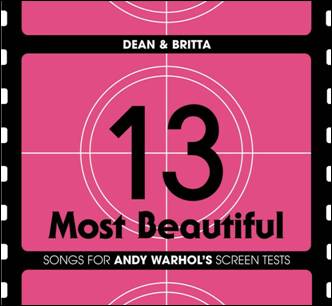 Having sold out the 2XCD limited edition of “13 Most Beautiful” and after numerous requests from fans, Dean & Britta are releasing a revised single-disc version on their own Double-Feature label. This new disc is re-sequenced to match the original running order of the DVD and live 13 Most Beautiful show. The CD has been newly packaged in a fluorescent pink gatefold designed by Frank Olinsky. “I’ll Keep It with Mine (Scott Hardkiss electric remix)”

When Dean & Britta, the electro-pop duo formerly of Luna, opened their vaults of their music for the Andy Warhol screen tests to DJ/ producer Scott Hardkiss a kinetic force drew him to several of their recordings: To view exclusive behind the scenes footage of the string quartet session for “I’ll Keep it With Mine” click below. More about 13 Most Beautiful:

Dean & Britta have been making waves with their highly acclaimed 13 Most Beautiful: Songs for Andy Warhol’s Screen Tests a special, limited-edition album. Originally commissioned by the Andy Warhol Museum, the project began as a live multimedia show featuring Dean & Britta performing in front of 13 shorts selected from Andy Warhol’s Screen Tests collection. The screen tests are silent portrait films made by Andy Warhol at the Factory between 1964 and 1966 with each film focusuing on a unique subject. The duo selected 13 subjects (including Dennis Hopper, Nico, Lou Reed), which became the inspiration for the music. Produced by Dean & Britta in Brooklyn, the album version features studio recordings of material written by the pair from the live show as well covers including Bob Dylan’s “I’ll Keep It with Mine” and the Velvet Underground’s “Not a Young Man Anymore” plus several extraordinary remixes & versions by Scott Hardkiss, Sonic Boom (Spacemen 3 / MGMT), Tony Visconti (David Bowie, T-Rex) and My Robot Friend.