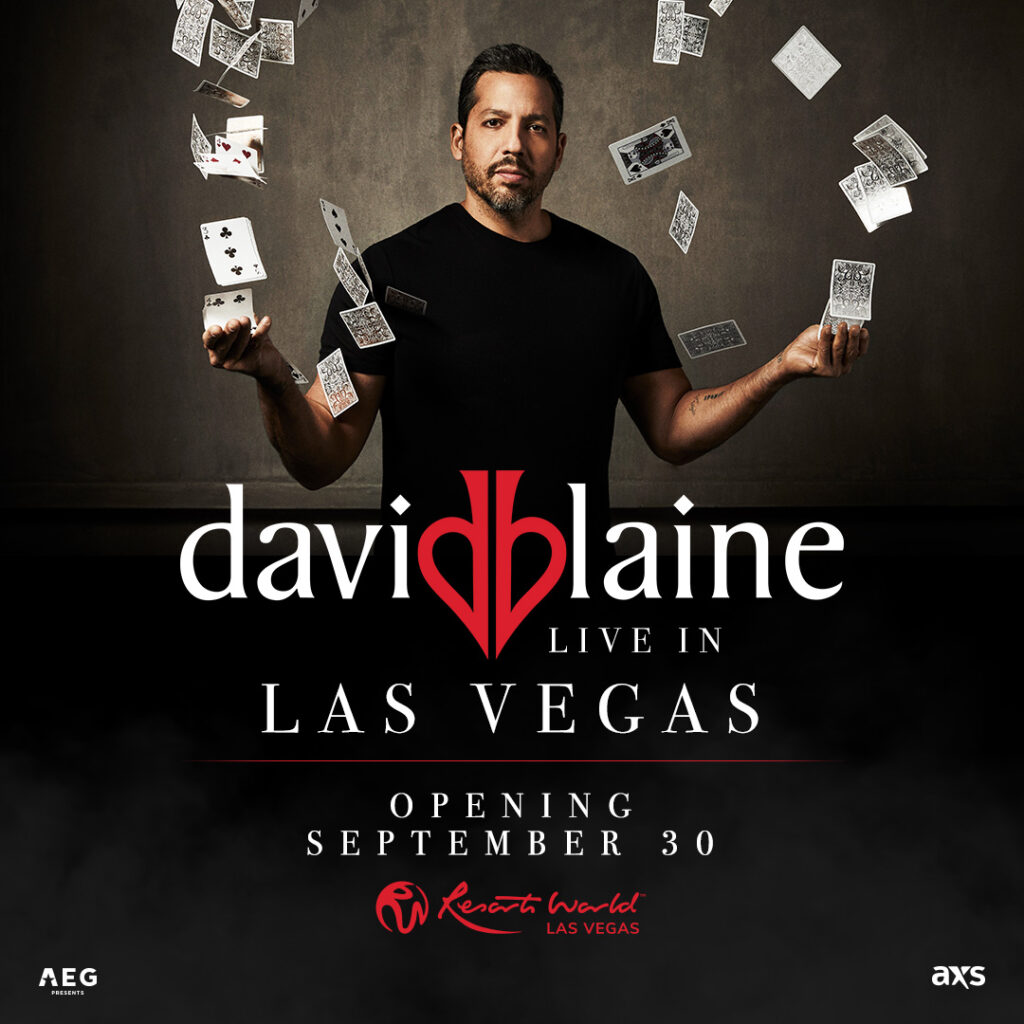 Magician, extreme illusionist, and stunt artist, David Blaine, is taking his mind-blowing talent to Las Vegas with his first-ever residency, DAVID BLAINE LIVE,  exclusively at Resorts World Theatre.  Known for his awe-inspiring magic tricks and death-defying stunts, Blaine will continue to push the limits and attempt unthinkable feats in the newest theatre on the Las Vegas Strip beginning September 30, 2022.

“The room is so intimate,” said Blaine.  “Resorts World Theatre has sparked my imagination and I am so excited to create something unique in magic.”

“Seeing the greatest magician in the world in the newest, state-of-the-art theatre in Las Vegas will be a show unlike anything this city has ever seen before,” says Bobby Reynolds, Senior Vice President of AEG Presents, Las Vegas. “Combining forces will make for a truly spectacular production, and we can’t wait for live audiences to be blown away.”

Tickets and a limited number of premium VIP packages for DAVID BLAINE LIVE will go on sale to the general public on Monday, May 23 at 10 a.m. PT at AXS.com and rwlasvegas.com/entertainment.

American Express® Card Members can purchase tickets before the general public beginning Wednesday, May 18 at 10 a.m. PT through Sunday, May 22 at 10 p.m. PT.

Exclusively programmed and operated by Concerts West / AEG Presents, the new, 5,000 capacity,  Resorts World Theatre, which officially opened its doors on Dec. 1, 2021, is a multi-level concert and entertainment venue designed by the award-winning international design firm, Scéno Plus. The intimate venue, with the furthest seat only 150 feet from the stage, features unparalleled comfort, unobstructed sightlines and an unmatched immersive audio experience through more than 200 L-Acoustics speakers powered by L-ISA hyperreal technology.

Described by Howard Stern as the greatest magician that ever lived, David Blaine single-handedly redefined magic after producing and directing his original television special Street Magic when he was just twenty-three, which Penn Jillette of Penn & Teller called “the best TV magic special ever done.” The New York Times noted that Blaine has “taken a craft that’s been around for hundreds of years and done something unique and fresh with it,” whilst The New Yorker claimed “he saved magic.” Over the last two decades, Blaine’s nine primetime specials have seen him being buried alive in New York City for a week, encased inside a six-ton block of ice for three days, survived standing atop a 100ft tall pillar in Bryant Park for 36 hours without a safety net, endured 44 days inside a transparent box in London on nothing but water, and had over one million volts discharged at him continuously for 72 hours from seven Tesla coils. Blaine also spent one week submerged in a sphere-shaped aquarium at Lincoln Center, before breaking the world record for breath holding live on the Oprah Winfrey show where he held his breath for over 17 minutes. In addition to the many millions who have seen him on television, Blaine has also performed live for audiences of over 20,000 in arenas around the world.  He has performed intimately for every sitting American president including Barack Obama, Bill Clinton and George W. Bush as well as a number of international leaders and prominent figures such as Henry Kissinger, Michael Bloomberg, Stephen Hawking, Muhammad Ali, among others.  His TED talk became one of Bill Gate’s personal favorites and is widely considered the most revealing testimony Blaine has ever given on the topic of his remarkable career.

India, China, the United States of America, Bahamas and the United Kingdom. Genting Group is a

leader in the global gaming and hospitality industry. Founded in 1965, Genting Group has more than

50 years of experience in developing and operating destination resorts in the Americas, Malaysia, Singapore, the United Kingdom and the Bahamas, offering an unparalleled resort experience and iconic entertainment attractions to over 50 million visitors a year. For more information, visit www.genting.com.