With Las Vegas now firmly established as an international hotspot for house music, TAO Las Vegas is going back to where it all started. On Sunday, May 29, TAO Nightclub presents the return of international superstar Erick Morillo for an epic 8 hour set to celebrate the fifth year anniversary of a legendary Memorial Day Weekend event that first put Vegas on the dance music map.

“Erick Morillo has the unique ability to capture the energy of a room and hold it until the sun rises. TAO has been able to build on his energy over the past five years and we’ve created a holiday within a holiday every Memorial Day Weekend and this year will be no different,” said Jason Strauss, Partner, TAO Las Vegas.

In the last five years, Memorial Day Weekend at TAO Las Vegas with Erick Morillo has become a veritable institution, exploding from 1,000 to 7,000 people last year and drawing clubbers from all over the world. The famed Asian-inspired nightclub, complete with 20-foot Buddha statue and state-of-the-art audio system, is the perfect backdrop for this larger-than-life house music pioneer. Indeed, the revolutionary night of house music has served as a catalyst in making Vegas one of the biggest markets for house music in the world, and TAO is ready to continue the tradition.

Erick Morillo says, “My Vegas love affair all started with TAO and the Memorial day weekend party has become a summer kick-off institution. We really jump started the entire house music revolution here that is now exploding in Vegas today and it’s really special to come back to play again for their 5 year anniversary.”

Morillo is the owner of Subliminal Records and a platinum-selling artist whose hits include Reel 2 Real’s “I Like To Move It,” “Break Down The Doors” and “Live Your Life” (with Eddie Thoneick, featuring Shawnee Taylor). At the onset of 2011, he launched a celebrated monthly DJ residency at the newly minted dance music mecca Marquee Nightclub & Dayclub at The Cosmopolitan of Las Vegas. This summer he returns to Ibiza for his annual residency this year dubbed “Subliminal Invasion,” with a companion CD to be released in June, along with his latest single “Stronger” on Subliminal Records. 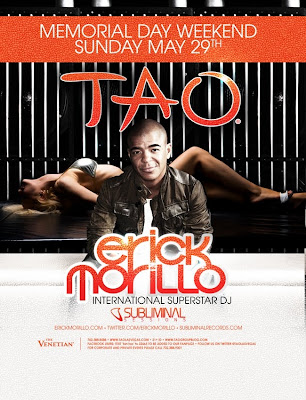