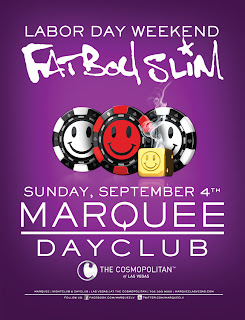 It really ain’t over til the Fatboy sings when it comes to Las Vegas. Legendary DJ/producer Fatboy Slim, a.k.a. Norman Cook, launched into the second date of his exclusive residency over July 4th weekend at Marquee Dayclub at the Cosmopolitan of Las Vegas. Mother Nature kept bizarre weather at bay in favor of amazing beats for a pool party of unparalleled proportions.

Adorned in a yellow shirt complete with trademark Fatboy Slim smiley face and crossbones, he festively matched the three-story-high FBS balloon in one of Marquee’s two pools, plus the custom FBS logo décor throughout the Dayclub. Hyping the crowd via megaphone and rocking out barefoot in a custom plexiglass DJ booth built just for him over Marquee’s main pool, he kicked the pool party into high gear with samples of his “Praise You” melding into a funky disco-esque remix and drops of “Fatboy Slim is f—king in heaven.”

Fatboy Slim blew kisses to the ladies, played “Put Your Hands Up for Brazil” and some sexy salsa for a group in Brazilian shirts, plus worked in a bevy of crowd pleasers including “The Big Bad Wolf”, “Rock the Casbah”, “Jump Around”, Bob Marley’s “Could You Be Loved”, and concluded the set with a mash-up of “Rockafeller Skank” and the Rolling Stones’ “Satisfaction”. Fatboy Slim’s whirlwind of tracks plus infectious energy spilled over to the Fourth of July weekend warriors splashing in the sun. And with his sounds working them into a frenzy, FBS’s ability to play to the crowd brought the vibe at Marquee Dayclub to new heights.

Be sure to catch Fatboy Slim’s final date of his summer residency with Chuckie on Labor Day Weekend – September 4 at Marquee Dayclub.