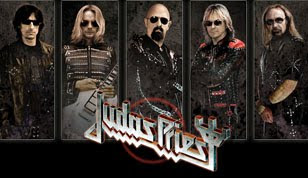 Judas Priest recently announced their upcoming Epitaph World Tour. After storming the world for nearly 40 years and taking their very special brand of heavy metal to all four corners of the planet, Judas Priest – one of the most influential heavy metal bands of all time, have announced this will be their final world tour. The band will bring their high energy show with special guests Black Label Society and Thin Lizzy to The Joint at Hard Rock Hotel & Casino on Sunday, October 23. Tickets go on sale this Saturday at noon.

The mighty Priest will certainly be going out strong as they rock the planet starting in the Summer this year on the massive EPITAPH tour – hitting all the major cities throughout the world, they will be playing the songs that helped make the name Judas Priest synonymous with heavy metal.

With all guns blazing and amps cranked to eleven, the band will be giving all their fans one last chance to witness the ultimate experience that is Judas Priest.

Tickets, starting at $59.50 (plus applicable service fees), will be available Saturday at noon at the Hard Rock Box Office, all Ticketmaster locations, online at Ticketmaster.com or charge-by-phone at 800-745-3000.

About The Joint
The Joint at Hard Rock Hotel & Casino is a 4,000-person capacity venue that serves as a sophisticated, intimate and unparalleled destination. The Joint features seven Luxury Suites, a VIP Studio Level, state-of-the-art sound system, superior video system and a production package tailor-made for artist comfort. It has received numerous accolades including “Best Concert Venue” in Las Vegas Review-Journal’s “Best of Las Vegas” awards in 2010 and 2011, “Best New Major Concert Venue” at the 2010 Pollstar Awards, and “Best Live Music Venue” in AOL City’s Best 2010 awards. The Joint delivers unforgettable live music experiences with an ongoing roster of legendary artists taking its stage including the first rock ‘n’ roll residency in Las Vegas with Carlos Santana’s Supernatural Santana: A Trip Through the Hits, Paul McCartney, The Killers, Bon Jovi, Kenny Chesney, Arcade Fire, Motley Crüe, Avenged Sevenfold, Alice in Chains, Paramore, Muse, Drake and No Doubt. The venue is also home to Tiësto In Concert, a groundbreaking live show created exclusively for The Joint featuring the world’s No. 1 electronic DJ and producer Tiësto. For additional information call 800.HRD.ROCK (800.473.7625). HardRockHotel.com / TheJointLasVegas.com. Keep up with the latest updates on The Joint via Facebook and Twitter.