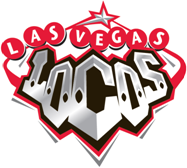 Las Vegas Locomotives Want to Know “Who Can Be Diesel?”
Open competition to be the 2011 Diesel Locomotive mascot begins June 27

The Las Vegas Locomotives are looking for Las Vegas’ most fun-filled, energetic entertainer to serve as the new Diesel Locomotive team mascot during the 2011 United Football League (UFL) season.

The team is hosting the “Who Can Be Diesel?” competition for anyone age 18 and older with a background in gymnastics, dance, theater or the performing arts. All interested candidates can download the contest entry form at http://www.lasvegaslocos.com/ after 4 p.m. on Monday, June 27, and applications must be returned to the Las Vegas Locomotives office at 750 Pilot Rd., Suite A, Las Vegas, NV 89119 by Wednesday, July 13 at 5 p.m.

“Our Diesel Locomotive mascot is a figure that all fans in the community have enjoyed during our time in Las Vegas,” said Ruben Herrera, Las Vegas Locomotives executive vice president of business development. “This year, we want to find someone who has the talent, energy and dedication to provide another entertaining element to the Locos fan experience.”

Following the application deadline, preliminary interviews will be scheduled on Friday, July 15 with a select number of semifinalist candidates. After these interviews are complete, the team will select a group of finalists to compete for the chance to perform as “Diesel” during the 2011 season.

Once the finalists are selected, each candidate will accumulate points during a fan voting period from Monday, July 18 through Thursday, July 28. Information the candidates provide in their interview along with a video of the candidate showing off their mascot skills will be posted online to allow fans to select their favorite. The candidate who accumulates the most points at the conclusion the voting will be awarded with the role of Diesel Locomotive. The winner will make their debut during the team’s pre-season scrimmage on Friday, July 29.

Those applying for the position must be willing to perform as Diesel for all four Las Vegas Locos home games in addition to select team activities throughout the community during the season. The winning candidate will receive paid compensation for performing as Diesel throughout the season. The Las Vegas Locos open their home schedule in week two of the UFL season with a matchup against the Omaha Nighthawks on Saturday, Aug. 27.

About the Las Vegas Locomotives
The Las Vegas Locomotives are the two-time defending champions of the United Football League (UFL). Led by Head Coach Jim Fassel, the team plays all home games at Sam Boyd Stadium and is the last of the four original UFL franchises to continue playing in its original home city. Fassel also serves as president and general manager of the franchise. Known as “The Locos” to local fans, the team has developed a strong following throughout Las Vegas by maintaining an active role in the community and showing strong leadership both on and off the field. Complete team and ticket information can be found online at http://www.lasvegaslocos.com/. Tickets can also be purchased by calling 702.877.LOCO.

Keep up with all Las Vegas Locomotives news, scores and information by following the team on Facebook (Las Vegas Locos) and Twitter (@LasVegasLocos).