The Swedish sensation Axwell, one of the top 10 DJs in the world, will be making his solo Las Vegas debut at Marquee Las Vegas Nightclub on Friday, June 10, 2011. Axwell, a member of the infamous Swedish House Mafia, is a certified expert in sending the club into utter meltdown. With Axwell comes larger-than-life tracks with epic hooks and infectious rhythms, switching between house, techno and electro (and everything in-between) without breaking a sweat. It’s perfect match for Marquee’s spectacular stage, dazzling dancers and state of the art sound system, which draws a packed house every night. And with Marquee firmly established as the number one destination for the world’s premier electronic music talent, it’s the perfect time to indulge in Axwell, king of the sun-kissed summer anthem.

Axwell is a superstar DJ and arguably the most successful and influential remixer of the 21st century, as evidenced by the GRAMMY nomination for his remix with Dirty South of Temper Trap’s “Sweet Disposition.” Axwell’s Midas-like touch has made him the dance hit go-to guy for artists like Madonna, Nelly Furtado, Moby, Flo Rida and Pharrell Williams. Not to mention his original tracks like “Nothing But Love,” a masterful house number featuring fantastic vocals by Errol Reid. On top of what is an already successful solo career, he is one third of Swedish House Mafia with Sebastian Ingrosso and Steve Angello, responsible for smash hits like “One,” “Miami 2 Ibiza” and “Leave The World Behind.” This year, Axwell’s busy touring schedule included the world’s top festivals and clubs, helping to lead him to the Top 10 spot in the famed DJ Magazine Top 100 DJ Poll. Indeed, DJing remains a real passion of his, a way to stay connected with clubbers and their ever-changing tastes. Witness it for yourself at Marquee Las Vegas 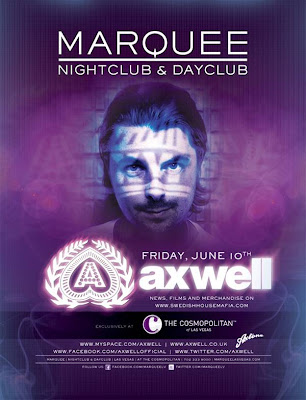