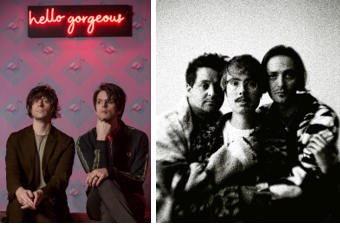 Pop rock outfits iDKHOW and Joywave are joining up at Brooklyn Bowl Las Vegas on Tuesday, Sept. 13 for a night of high-energy performances as a stop on their highly anticipated Welcome to Hellvetica tour.

I DONT KNOW HOW BUT THEY FOUND ME, or iDKHOW is the band led by frontman, multi-instrumentalist, and mastermind Dallon Weekes. iDKHOW formally revealed itself with 2018’s 1981 Extended Play EP prior to hitting the road. The group released their debut album Razzmatazz October of 2020, which debuted top 25 on nine charts including #1 Alternative New Artist, #2 Billboard Heatseekers and a #1 Alternative radio hit with lead single “Leave Me Alone. iDKHOW has hit 400 million streams, graced the covers of Alternative Press, Dork, and Upset, and earned acclaim from Billboard, SPIN, Forbes, American Songwriter, Rock Sound, DIY Magazine and many more.  With the success of the hit single “Leave Me Alone,” the duo made their late night television debut earlier this year on Jimmy Kimmel Live! performing the track, followed soon after by their daytime debut on The Ellen DeGeneres Show. Both performances saw the band trending nationally on Twitter after each show aired thanks to their loyal fans. The bands single “Choke” has recently been certified Gold in the US by the RIAA.

Founded in Rochester, New York in 2010, alternative rock band Joywave broke into the scene with the release of their debut LP “How Do You Feel Now” in 2014. A major commercial success, the LP quickly found its place on the Billboard charts reaching #25 on the Billboard Alternative Albums chart, #34 on the Top Rock Albums chart and #3 on the Heatseekers Albums Chart. Joywave then went on to release their sophomore album “Content” in 2017 before following up with “Possession” in 2020. “Cleanse,” the band’s latest album, was conceived, written and recorded in frontman Daniel Armbruster’s home during the pandemic. “’Cleanse’ became the words, encouragement and special cautions that I would like to share with you if this is the last time we spoke,” said Armbruster.

Tickets to iDKHOW and Joywave at Brooklyn Bowl Las Vegas start at $29.50 and will go on sale online on Friday, June 3 at 10 a.m. PST. Spotify presales will be available starting Wednesday, June 1 at 10 a.m. PST with artist presales taking place the following day on Thursday, June 2 at 10 a.m. PST.