Peter Bjorn and John’s New Album Gimme Some is Out Today on Star Time International! 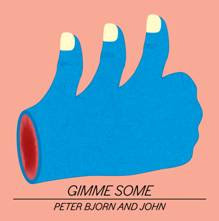 The reviews are in, and Peter Bjorn and John’s new album Gimme Some is giving the critics something to love! Just check out what the press has been saying:

“SPIN’s 23 Spring Albums That Matter Most… Nobody ever talks about the trio without using the word ‘catchy,’ and for good reason…” – SPIN

“…the ear candy crafted by this Stockholm-based band is decidedly raw.” – USA Today

“…a top contender for best album of the year.” – ELLE

Fans can buy the album on iTunes here: http://itunes.apple.com/us/album/gimme-some/id422936679

They’ll be kicking off their US headlining tour on April 28th at the Masquerade in Atlanta, GA. For the most up to date information on the band’s tour, check out: www.peterbjornandjohn.com.