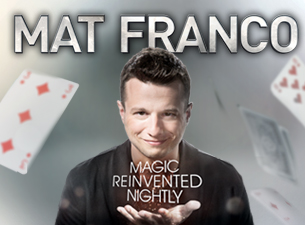 MAT FRANCO – MAGIC REINVENTED NIGHTLY celebrated a momentous first anniversary at The LINQ Hotel & Casino. To commemorate the special occasion, Mat and company were presented with a custom, magic-inspired cake and cupcakes. Following an electrifying performance for the packed theater, the company joined together backstage to discuss the thrilling first year of performances, sharing memories and laughs while enjoying the delectable treats.

Since the show’s launch in August 2015, MAT FRANCO – MAGIC REINVENTED NIGHTLY has celebrated more than 300 performances and continues to grow in popularity, astounding nearly, if not completely,  sold-out crowds nightly inside of the LINQ Theater. For tickets and more information, visit MatFranco.com

Mat Franco takes the stage in MAGIC REINVENTED NIGHTLY at The LINQ Hotel & Casino with a fun and feel-good twist on magic that defies all expectations. Fresh from his triumphant win on America’s Got Talent and his follow up primetime special, Mat Franco’s Got Magic on NBC in 2015, Mat presents an unparalleled production and innovative approach to magic-making that’s driven by his passion and imagination. With his signature brand of breezy humor, Mat mixes his amazingly inventive and stunning magic with crowd-guided improv, creating a once-in-a-lifetime adventure that’s unique and unforgettable to each audience. For more information, visit MatFranco.com and connect with us on Facebook, Twitter and Instagram – @MagicReinvented.