Playboy Club Keeps the Party Hopping with its Signature Libation, the Bunny Tail 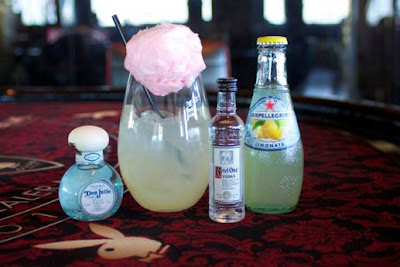 In honor of the upcoming Easter weekend and the fabled Easter Bunny, Playboy Club inside Palms Casino Resort highlights one of the most distinguished fashion traditions of the legendary Playboy Bunnies – the Bunny Tail, also the name of the nightclub’s signature cocktail, available now. Created by Mixologist Dave Herlong, the libation is a creative blend of Limoncello, San Pellegrino Limonata sparkling soda and choice of Ketel One, Ketel Citroen or Don Julio Blanco. Garnished with a lemon wedge, the Bunny Tail is topped off with a puff of cotton candy. Served with the Pellegrino and mini bottle of liqueur on the side, partygoers are always in for a visual and mouth-watering treat as they pour the sparkling soda and liqueur over the cotton candy, witnessing the cotton candy dissolve with the rest of the concoction. For $15, Sin City’s sexiest socialites can party and play alongside the beautiful Playboy Bunnies while indulging in the refreshing sweetness of the Bunny Tail.

Playboy Club once defined an era and has re-emerged to serve as the perfect complement to the Las Vegas scene. Playboy Club is located in the Palms’ Fantasy Tower and is connected to the cutting-edge Nove Italiano and the exclusive Moon nightclub by glass and mirror-ensconced escalators. Every design element is custom made for Playboy Club, from the bunny buttons on the sofas to the collage wallpaper in the bathrooms featuring every centerfold from the last 25 years covered in shimmering glass beads. A wide range of wine, spirits and liquor are available. Playboy Club introduces a complete integration of lounging and gaming; an exclusive VIP area called the Fireplace Lounge features dark tones, a cozy fireplace, its own bar and sophisticated furniture. Central to the main room is a gaming pit, which offers blackjack and roulette. Design details reflect the iconic image of the Playboy logo and capture the lifestyle the Playboy Club has always, and will always, represent to the world. The entire theme is presented in an elegant, understated manner, as the nostalgic era of the Playboy Club is updated for 21st century Las Vegas in a way only the 9 Group could do it. Each month, Playboy Club hosts the Miss Playboy Club Model Search, where contestants compete for a variety of prizes such as inclusion in the Playboy Club annual calendar and the once-in-a-lifetime chance to appear in a future issue of Playboy magazine. Playboy Club is open seven nights a week, from 9 p.m. until late. For additional information, please visit http://www.playboyclub.com/ or call 702.942.6900.