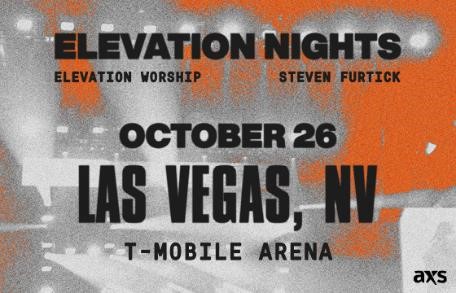 Following two successful limited tours, Premier Productions and Elevation Church announce a continuation of the Elevation Nights Tour featuring Elevation Worship and Steven Furtick. Elevation Nights 2022 will continue to bring the powerful worship experience of Elevation Church into arenas across the West Coast this fall. The tour will make a stop at T-Mobile Arena in Las Vegas Wednesday, Oct. 26.

After crowds of ten thousand per night on the Spring 2022 Elevation Nights Tour, Elevation Worship and Steven Furtick are back to lift your spirits with a message of faith, hope and love.

“We are so pleased to finally be bringing Elevation Nights to the West Coast,” says Jonathan Roberts, VP Global Touring, Premier Productions. “Coming off of some incredible highlights earlier this year including sold out nights in Newark, Chicago, and 14,000 strong in Columbus, OH, we are ecstatic to see what these nights will bring to each city.”

Audiences can sign up for the exclusive pre-sale Tuesday, July 26 beginning at 10 a.m. PT at elevationnights.com. Tickets go on sale to the public on Thursday, July 28 at 10 a.m. PT.

“We’ve been so excited to take Elevation Nights to the west coast for the very first time,” says Chris Brown of Elevation Worship. “These nights have become some of the most special times of ministry I’ve experienced. Gathering with thousands of others to have our faith inspired through worship, and hear a word from God through Pastor Steven makes these nights so much more than a concert. We can’t wait to see how God moves each night.”

The Elevation Nights tour is a full worship experience as Furtick preaches and Elevation Worship leads some of their hit songs including “Graves Into Gardens,” “RATTLE!,” “Do It Again,” “The Blessing” and others. The eight-city arena tour will kick-off on October 25 in Glendale, Ariz. with stops in Las Vegas, Nev., Sacramento, Calif., Eugene, Ore., Seattle, Wash., Oakland, Calif., and San Diego, Calif., before the final show on November 3 in Los Angeles, Calif.

Elevation Worship is the worship ministry of Elevation Church, a multi-site church based in Charlotte, N.C. led by Pastor Steven Furtick. Elevation Worship has produced 14 albums that include American Christian radio No. 1 songs “Graves Into Gardens” and “RATTLE!,” RIAA Gold®-certified songs “Jireh” and “The Blessing,” and RIAA Platinum®-certified and American Christian Radio Top 5 song “O Come to The Altar.” The group currently has ten songs on the CCLI Top 100 list. The ministry of Elevation Worship is passionate about producing songs for the local church that connect others to God. Their main priority is to create an atmosphere of worship so people can encounter Jesus in a real and personal way. Their most recent album, LION, released in March of 2022. For more information, please visit ElevationWorship.com.

Steven Furtick is a pastor, songwriter and New York Times best-selling author. As founder and lead pastor, he has helped grow the multi-site Elevation Church into a global ministry through online streaming, television and the music of Elevation Worship.

He holds a master of divinity degree from Southern Theological Seminary and is the author of Crash the Chatterbox, Greater, Sun Stand Still, (Un)Qualified and Seven-Mile Miracle. Pastor Steven and Holly live in Charlotte, N.C. with their two sons, Elijah and Graham, and daughter, Abbey.

Founded in 1996, Premier Productions has sold over 20 million tickets to patrons. Premier has been a Top 20 global promoter and has produced more than 2,000 concerts and events in the past five years. Pollstar named Premier the #1 faith and family independent promoter in the last 10 years. Producing events that move the soul both nationally and internationally, Premier is proud to have helped raise more than $271 million to improve the lives of children and communities in 100+ countries worldwide. Whether it’s a large multi-day festival, sold-out concert or intimate conference, Premier seeks to positively impact the lives of every attendee so they leave encouraged, happy and hopeful. Premier is currently promoting acts including Hillsong UNITED, Dude Perfect, Lauren Daigle, Hillsong Worship, Baby Shark, Casting Crowns, Chris Tomlin, Sadie Robertson, Elevation Worship, Kari Jobe Bethel Music  and many more.