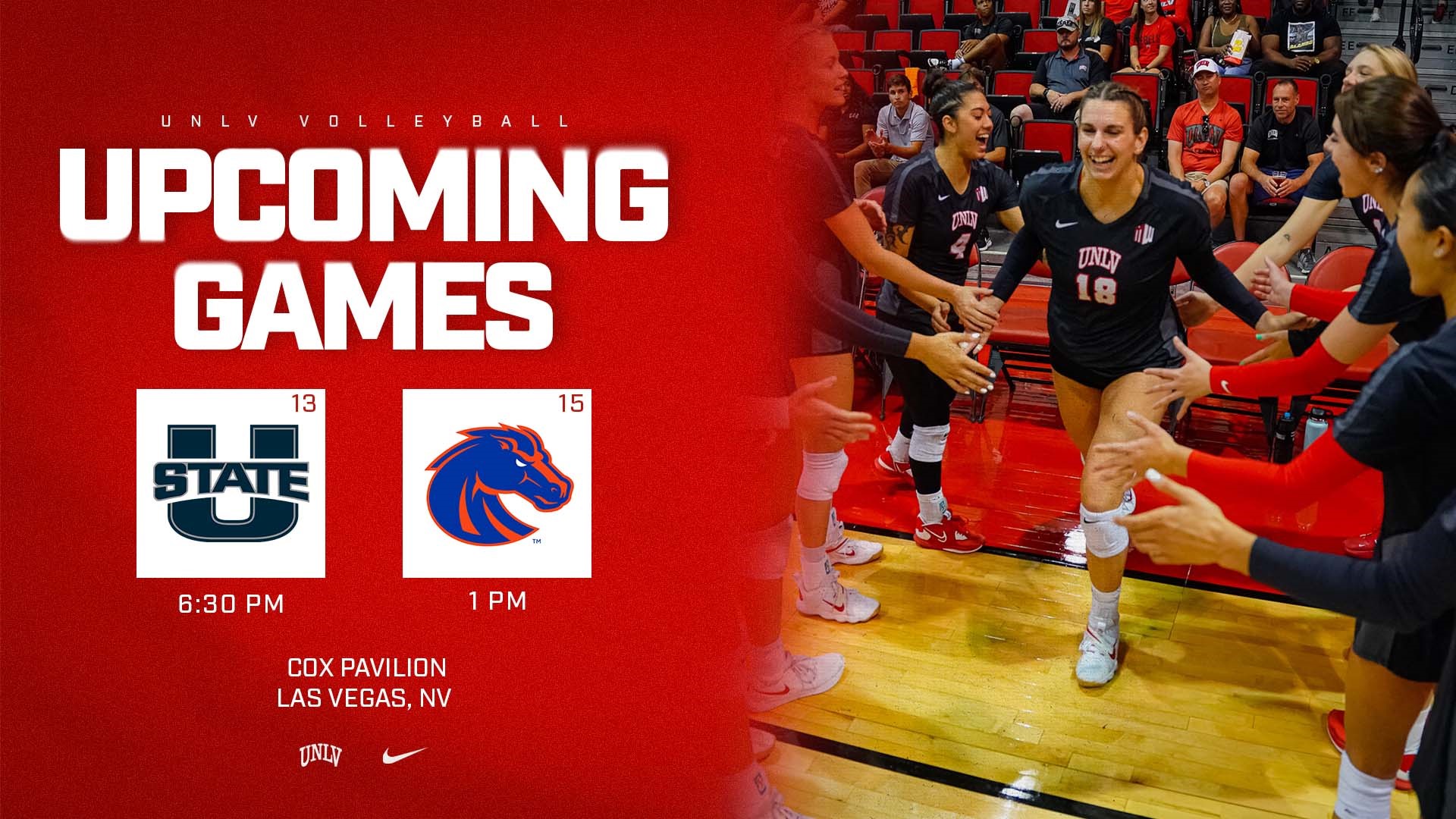 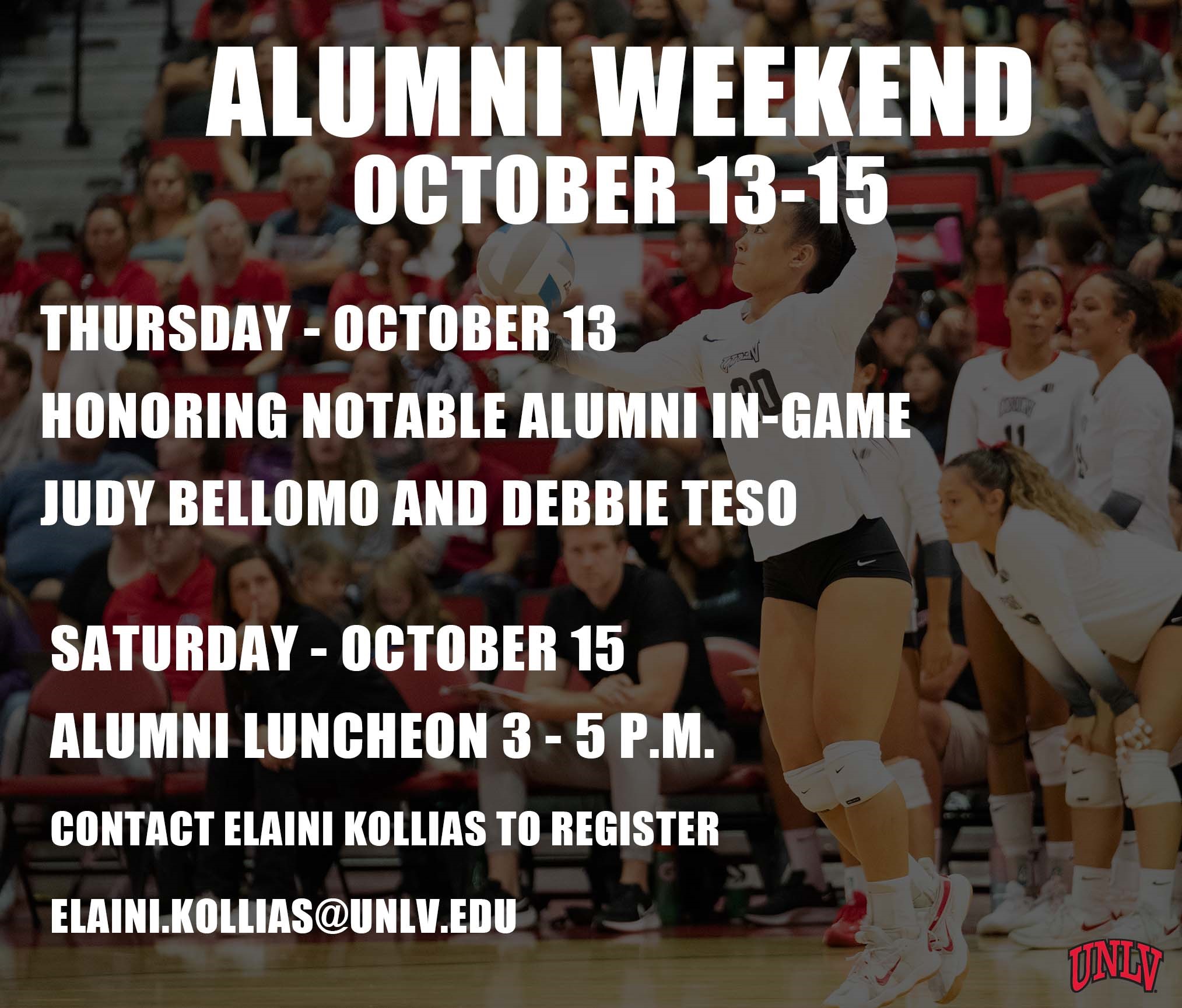 The Rebels will kick things off Thursday night at 6:30 p.m. against the Aggies, followed by the homecoming game set for Saturday afternoon against the Broncos at 1 p.m.

UNLV is coming off a 2-0 weekend on the road in conference play, sweeping New Mexico in Albuquerque Thursday night, 3-0, and defeating Air Force in Colorado Saturday afternoon, 3-2.

Utah State, who was predicted to finish second in the MW preseason poll, comes into the week after also going 2-0 in conference play at home over the weekend. The Aggies swept San Diego State Thursday night, 3-0, and defeated Fresno State in four sets, 3-1. Utah State will take on Boise State Tuesday evening before heading over to Las Vegas.

Boise State, who was predicted to finish third in the MW preseason poll, is also coming into the weekend with a 2-0 record in conference play at home. The Broncos swept Fresno State Thursday night, 3-0, and took down the Aztecs of San Diego State in four sets Saturday afternoon, 3-1. Boise and Utah State will square off Tuesday evening before heading over to Las Vegas.

The Scarlet & Gray will face both programs on the road later this month, beginning with Boise State Thursday, October 27 at 6 p.m. (PT) and followed by Utah State Saturday, October 29 at 12 p.m. (PT).

ON THE SIDELINES
The Rebels take on San Jose State Thursday, October 20 at 6:30 p.m. in Cox Pavilion, before hitting the road to Reno to play against UNR Saturday, October 22 at 1 p.m.

OTHER NEWS & NOTES
– Dating back to 2019, UNLV has gone 71-15 in its last 86 matches. The Rebels have won 14 of 17 matches this season and 40 of its last 49.
– UNLV returned eight letterwinners this season. Also returning to the squad from last season were Gabrielle Arretche-Ramos, Arien Fafard, Jordyn Freeman, Chloe Thomas, Isha Knight, Keyana Cruse, Dakota Quinlan, Livvy Setla, Isabel Martin and Thea Sweder. There are eight newcomers, which include three freshmen, a trio of transfers and a pair of graduate transfers.
– UNLV is led by fifth-year head coach Dawn Sullivan, who looks to guide her squad to the postseason for the fifth straight season.
– Junior Arien Fafard had her 1,000th career assist during the opening weekend of the Rebels’ 2022 campaign at UNT.
– The Rebels defeated No. 19 Kansas on September 10, 2022, making that the second win over a ranked team since 2016. The first being then No. 25 Washington State during the fall 2021 season at the Rebel Challenge (Sept. 4, 2021).

PURCHASE TICKETS: Tickets for the 2022 UNLV Volleyball season, which are just $50 for the general public and $40 for seniors, faculty & staff or alumni, are on sale now and may be purchased at UNLVtickets.com, by calling 702-739-FANS (3267) or by visiting the Thomas & Mack Center Box Office.

Single-game ticket prices this season are $10 for adults, $8 for seniors, faculty and staff, and $5 to groups of 15 or more. Fans that purchase tickets online before game day can get them for an advanced single-game price of $6.