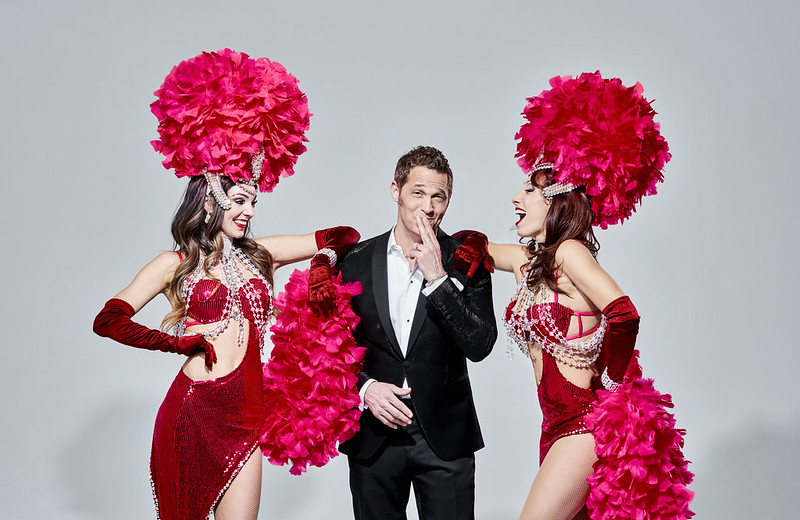 Reckless In Vegas, whose utterly distinctive sound offers a Modern Twist on Vintage Vegas, announces it will begin an ongoing engagement at SAHARA Las Vegas June 30. Performing in the Las Vegas Strip’s fabled resort-casino, which recently completed a $150 million renovation and where Louis Prima, Bobby Darin, Buddy Hackett and Don Rickles once graced the showroom stage, Reckless In Vegas will appear in the SAHARA Las Vegas Theatre on Thursday and Friday evenings at 8:30 p.m. Audiences can look forward to rocking out to the power trio’s exhilarating original renditions of beloved classics by the Rat Pack, Elvis Presley and more.

Reckless In Vegas steals audiences away to the bygone days of Las Vegas when the drinks were strong, the entertainers charismatic and the music intoxicating. The show combines the imagery, comedic banter, glamorous showgirls and classic music from Sin City’s 1960s “glory days” with a contemporary rock band aesthetic.

Whether audiences remember the swinging Vegas lounge era days or were born much later, Reckless In Vegas brings something for everyone. Video montages, dialogue, humor, modern hard-rocking grooves and tender moments of balladry combine to create a truly original take on this classic genre. Think The Rat Pack meets Green Day.

“Performing at the historic—yet completely reimagined—SAHARA Las Vegas on the Las Vegas Strip represents a dream come true for me,” says Shapiro. “There exists no better venue for our band, which reinvents and reinvigorates classic Las Vegas entertainment for contemporary audiences.”

About Michael Shapiro
Shapiro was raised in Las Vegas and, after stints in Oregon and California, returned to his hometown in 2015. He picked up his first guitar at age 13 and trained hard in guitar, vocals, piano and trumpet, attuning his ear to classical opera as well as rock. A chance encounter with a family friend struck the right chord and paved Shapiro’s way into music. At age 16, he had the opportunity to jam with Bruce Springsteen. The rocker’s energetic marathon performances spurred Shapiro to develop a taste for a raucous stage presence. After playing in various cover bands in his teens, Shapiro formed the band Trip, released several albums and toured. Being part of the VH1 Rock Across America Tour, Trip opened for such artists as Edwin McCain, Duncan Sheik, The Romantics and Cheap Trick. It was during an ill-fated gig opening for Great White when a tragic fire struck, that moved Shapiro to deeply reflect on life’s vagaries and whims.

He bounced back, releasing his first solo album, Somehow, Someway, and toured nationally, opening for the alt-rock band Live. After moving to San Rafael, Calif., he formed the power trio, Reckless in Vegas.

Shapiro’s style yields insight into his influences: Jimi Hendrix’s relentless guitar riffs, Journey’s Neal Schon, Carlos Santana and the melodic and powerful vocal styling of U2′s Bono. In fact, it is “Hendrix’s bluesy style” and wild “manipulation of the guitar” that Shapiro credits as a major early influence.

About Jack E. Roth
With more than 35 years’ experience, Roth has played drums and percussion on hundreds of projects associated with major labels and otherwise (including work with MCA, Universal, Interscope, MTV, VH1, Artisan, EA Sports), resulting in an extensive knowledge of playing, recording, production and engineering techniques.

Roth is endorsed by Ayotte Drums, Aquarian Drumheads and Gibraltar Hardware and is a proud member of ASCAP.

About Chris Nichols
Born in Newark, Ohio, as the son of a piano teacher, Nichols studied the piano, cello, guitar, drums and bass.  His early years led him to Nashville where he toured with several artists throughout the nation. His desire to “Go West” led him to Las Vegas when the mob still owned the town. He saw the Sands and the Dunes casinos fall to their demise. Since moving to Sin City, he has recorded on several records both as an artist and an engineer.  Nichols actually shared the stage with Shapiro in Trip as they ascended to the height of that band’s career. With the help of several bands, he has also shared stages with Willie Nelson, Chris Isaak, Toto, Peter Frampton, Rick James and Lifehouse, to name just a few.