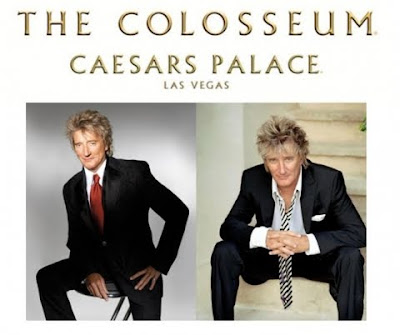 RETURNS TO LAS VEGAS WITH “THE HITS.” TO CELEBRATE
HIS FIRST RESIDENCY AT THE COLOSSEUM AT CAESARS PALACE
* * *
ROD STEWART AND SIN CITY… A MATCH MADE IN ROCK ‘N’ ROLL HEAVEN
– The Hollywood Reporter

TICKETS ON SALE BEGINNING SUNDAY, MAY 15 at 10AM

Today, legendary rock icon Rod Stewart confirmed his long-rumored return to The Colosseum at Caesars Palace for the first 18 concerts of his two-year Las Vegas residency, kicking off on August 24, 2011. Rod Stewart: The Hits. will be a concert celebration featuring a set list of the rock and R&B favorites which have defined Stewart’s unparalleled five-decade-long career. The spectacular, state-of-the-art production, presented by AEG Live, will be a culmination of Stewart’s seminal hits like “Maggie May,” “You Wear it Well,” “Hot Legs,” “You’re in My Heart,” and “Some Guys Have All the Luck” mixed with a few surprise rarities and sizzling covers. Rod Stewart: The Hits. is being designed to give audiences that intimate, only in Las Vegas concert experience – with no fan more than 120 feet from the magnificent stage.

Stewart’s triumphant return to Las Vegas continues one of the most successful and critically-acclaimed 12 months of his career, highlighted by his just-wrapped The Heart & Soul Tour with Stevie Nicks – which is currently the #2 highest grossing tour on Billboard’s 2011 Boxscore chart. The tour has garnered Stewart enormous critical praise including The New York Post which declared Stewart “Forever Young,” US Weekly, which called his set list “…a non-stop jam session” and The Globe and Mail, which declared, “Rod Stewart competes with no one…” In addition to praise for his concert performance, Stewart was just honored with the prestigious ASCAP Founders Award for his songwriting and received his 16th Grammy nomination for “Best Traditional Pop Vocal Album.” Stewart’s incredible year began with his chart-topping, 33-date 2010 European summer tour – which included four sold-out dates at London’s O2 Arena – and continued with a sold-out, eight concerts at The Colosseum in Las Vegas in November of 2010.

Rock and Roll Hall of Famer and Grammy™ Living Legend Rod Stewart has been lauded as having one of the most distinctive voices in pop music. In a career spanning five decades, with an estimated 250 million album and single sales he is indisputably one of the most successful singers, songwriters and performers of all time. Throughout his prolific career, Stewart has garnered an amazing 18 Grammy nominations and has performed for sell-out crowds throughout the world. With his career in its fifth decade, Stewart has achieved numerous solo hit singles worldwide, most notably in the UK, where he has garnered six consecutive #1 albums and his tally of 62 hit singles include 24 that reached the Top 10, six of which gained the number one position. His hit singles include “Maggie May,” “Tonight’s the Night,” “Hot Legs,” “Da Ya Think I’m Sexy?,” “Forever Young,” “Young Turks,” “Rhythm of My Heart,” “Some Guys Have All the Luck,” “Have I Told You Lately?,” “Stay With Me,” and “First Cut is the Deepest.” For more information, visit http://www.rodstewart.com/us/home.

About Caesars Palace
Caesars Palace is the world’s best known resort-casino, celebrating the grandeur that was Rome, in an 85-acre destination location that sets the standard for entertainment, dining and luxury. Reigning at the heart of the Las Vegas Strip, Caesars Palace features 3,300 hotel guest rooms and suites, 23 diverse restaurants and cafes, five-acre Garden of the Gods pools and gardens, 50,000 square foot Qua Baths & Spa and 300,000 square feet of premium meeting and convention space. The 4,300-seat Colosseum sits just steps from celebrity chef restaurants and the acclaimed Forum Shops at Caesars and spotlights world class entertainers such as Celine Dion, Elton John and Jerry Seinfeld. Find Caesars Palace on Facebook at and follow on Twitter.