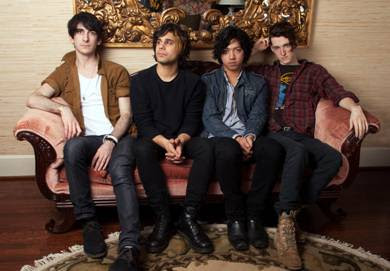 New Jersey indie rockers The Static Jacks are thrilled to announce the August 30th release of the debut full-length studio album If You’re Young through a newly inked deal with Fearless Records as well as on their imprint Fenway Recordings/Nobody People. Produced and mixed by Chris Shaw (Weezer, Ted Leo), the 12-track album is the follow-up to their critically acclaimed 2009 EP Laces which earned them opening slots with The Futureheads & The Like, Biffy Clyro, Young the Giant, Titus Andronicus, and Tokyo Police Club among others. In conjunction with the album release announcement, the band is premiering a track off If You’re Young with Filter Magazine Online – http://filtermagazine.com/index.php/media/entry/mp3_the_static_jacks_their_girl_parts_filter_exclusive. “Girl Parts” is the first new track from the debut to post and it includes guest vocals by Ceci Gomez of Beast Make Bomb.

In anticipation of the upcoming debut release, The Static Jacks are also thrilled to be joining the inaugural Escape to New York festival on August 5th-7th which boasts headliners Patti Smith, Edward Sharpe and the Magnetic Zeros and Best Coast. This music and cultural festival is the creation of Fred Fellowes and modeled after his Secret Garden Party in England which has grown to draw over 30,000 people a year and has featured such acts as Phoenix, Florence and the Machine and the xx among many others. Watch The Static Jacks perform at the Escape to New York festival in Southampton, NY on August 5th.

The Static Jacks, Ian Devaney (vocals), Henry Kaye (guitar), Michael Sue-Poi (guitar), and Nick Brennan (drums), grew up together in the suburbs of New Jersey crafting their initial sound through endless basement sessions and a deep study of past purveyors of punk. Shortly after their creation, they were impressing music insiders with their feverish energy, commanding vocals, and sing-a-long choruses and impressed a number of critics with their EP, landing them the NME Breakthrough Band of July 2010, Maxim Magazine’s SXSW 2010 Highlighted Artist, Deli Magazine’s Band of the Month, and a feature with traditionally electronic music focused RCRD LBL.

Now with a newly inked deal with Fearless Records, The Static Jacks are psyched to be gearing up for their debut full-length release later this summer. If You’re Young puts on no facades and the band delivers an honest, raw and melodic debut that is sure to win them countless new fans. Check out the premiere of “Girl Parts” out now at Filter Online and see the band live at the first ever Escape to New York festival this August.