Blue Man Group will be featured in a special video presentation during the 2017 NHL Awards and NHL Expansion Draft. The special event will take place at the T-Mobile Arena on Wednesday, June 21. NBCSN and Sportsnet will broadcast the event live in the United States and Canada, respectively, at 8 p.m. ET / 5 p.m. PT.

Hosted by actor, director and author Joe Manganiello, the NHL Awards Ceremony will honor the best hockey players in the world and top performances of the 2016-17 season. Broadcasters Daren Millard of Sportsnet and Kathryn Tappen of NBC will emcee the NHL Expansion Draft portion of the event, during which the NHL will welcome the first members of the NHL’s 31st team, the Vegas Golden Knights.

Fans can keep up with Blue Man Group on Twitter, Facebook and Instagram, and with the hashtag #DareToLive.  Fans can follow the 2017 NHL Awards and NHL Expansion Draft presented by T-Mobile via the official hashtag #NHLAwards.

This creative collective has become part of the pop culture zeitgeist. Blue Man Group has served as the face of branding campaigns for Intel and TIM/Brasil and appeared countless times on hit shows like “The Tonight Show,” “Arrested Development,” “Ellen,” “Schlag den Raab” (Germany), “WOWOW” (Japan), and “Caldeirão do Huck” (Brasil).

Beyond the stage show, they are Grammy-nominated recording artists, known for their contributions to various film and TV scores and multiple Blue Man Group albums, including their most recent, THREE.  Their “Megastar World Tour” rock concert parody played arenas across the globe. The group’s recently published first-ever book, Blue Man World, is a visually stunning anthropological exploration of the curious bald and blue character.

Undoubtedly the most famous 4.2 mile road in the world, celebrities descended on Las Vegas Boulevard by the masses to celebrate the New Year with hundreds of thousands of revelers who flooded the streets for the annual countdown. Anchoring the all night party in Sin City was an elite group of A-listers who chose to be front and center as the lights came up on 2015. Whether indulging in the lavish nightlife scene, enjoying a world-class dinner with friends or leading the party themselves, one thing is clear after this star-studded holiday: Center Strip reigns as the place to create those quintessential, over-the-top memories Las Vegas is known for.

In a special One Night Only event, Lopez performed all of her hits at the iconic Colosseum at Caesars Palace

. The show, titled “The Best Is Yet To Come,” brought the international superstar to the stage at 10:30 p.m. and capped off with a ceremonial countdown to the New Year. With only a limited number of tickets available to the public, this was the Strip’s most exclusive engagement. Featuring a cast of 25 musicians and high-energy dancers, the evening left the sold-out crowd with much to reminisce about.
Our highlight of the night: when Lopez sang her hit “If You Had My Love” which featured the showgirls of Jubilee at Bally’s. Classic!

Love was in the air atPlanet Hollywood Resort & Casino as newly engaged actress Sofia Vergara and fiancé Joe Manganiello joined Arnold Schwarzenegger and his girlfriend Heather Milligan. Accompanied by Patrick Schwarzenegger and his new sweetheart Miley Cyrus, the three couples started with dinner at Strip House before heading down to a private pre-show meet and greet with Britney Spears. Following the meet and greet, the couples (joined by friends) took in the “Britney: Piece of Me” show.

Rounding out a year of unforgettable performances, Spears’ wildly popular Las Vegas residency – “Britney: Piece of Me” – is an indisputable success inside The AXIS at Planet Hollywood. Not only did the aforementioned three couples catch her live performance, but Kelly Clarkson was also seen on social media professing her love for Spears’ show after seeing it on Dec. 30.

After toasting to the midnight moment with boyfriend Nick Young of the LA Lakers, Iggy Azalea took to the stage at Drai’s Nightclub for a 1 a.m. performance of her biggest hits. Perched 11 stories high atop The Cromwell, the club was at capacity with fans waiting to see how the girl who owned 2014 would kick off 2015. Featuring a slew of her well-known records such as “Black Widow,” “Fancy,” “Beg For It” and many others, the star – dressed in the sexiest, glitteriest, fringiest one-piece we’ve ever seen – put on a party so wild that anyone in close proximity to The Cromwell had to have known I-G-G-Y was taking over and keeping the New Year’s Eve party going.

If you missed out on the holiday action in Las Vegas, don’t worry – Caesars Entertainment has you covered. The world’s most renowned resort group is supplying the Center Strip party every day of the year with its roster of acclaimed shows, distinguished hotels, celebrity chef-driven eateries and more. You too can party, dine, relax and even sleep in Las Vegas like a celebrity. All you have to do is plan your next Las Vegas adventure now.

TAO Nightclub had their third star studded night at Village at the Lift in Park City on Sunday night with Moët & Chandon Imperial Rosé and Stella Artois. Celebrities and VIPs came in flocks to escape the cold and enjoy the exclusive underground popup club. DJs Sinatra, Jesse Marco, and Theory performed their annual Sunday Funday Party while Kirill Was Here took photos of all of the action.

True Blood’s Joe Manganiello kicked off the night with an after party for his new stripper documentary: La Bare. Joes friend DJ Z-Trip came to do a special set for the party. The group included Joe’s girlfriend Bridget Peters, and his brother Nicholas Manganiello who is his producing partner.  Their group arrived early and danced throughout the night drinking out of their Moët & Chandon Nectar Imperial Rose Goblets.

Lindsay Lohan arrived with a group of friends wearing a trucker hat and a black T-Shirt. Seated at her table was DJ Julian Cavin who she is rumored to be dating. Lohan had a great time with friends including Ryan Rottman, hanging out at their table and making a quick cameo to the DJ booth.

Actress Shailene Woodley arrived to TAO Nightclub looking winter chic and casual in a scarf and UGGs. Woodley was having an amazing time drinking and dancing with friends including Shawn Caulin Young and Anastasia Griffith but was most excited to see Shiloh Fernandez. As soon as he arrived, the two hugged and were so excited to see one another. They spent the night dancing together at their table with their group of friends.

Also spotted were Breaking Bad’s Aaron Paul alongside his beautiful wife Lauren. The lovebirds were in good spirits and hung out at their table all night. Adrian Grenier joined TAO after a day of snowboarding, ready to unwind with some friends. Rose McGowan came for her second night of the weekend dressed in black and white flannel and had a great time with friends. Holly Madison also came for another night with husband Pasquale Rotella dancing at their table and wearing a light up pink boa.

Jason Momoa and Geoff Stults were in good spirits all night and their table appeared to be having a lot of fun. They stayed late, drinking and partying with their friends and both men graciously posed with fans throughout the night.

TAO will continue the party at The Village at The Lift through Monday night.

“True Blood” co-star, Joe Manganiello, was spotted Sunday afternoon at COLOR, A Salon by Michael Boychuck, (http://www.michaelboychuck.com/) inside Caesars Palace with his fiancée, Audra Marie. The actor best known as the hunky werewolf in hit HBO television series, and his fiancée stopped in to the world-renowned salon to pamper themselves with manicures and pedicures. Manganiello was friendly with the COLOR Salon staff and even posed for photos. 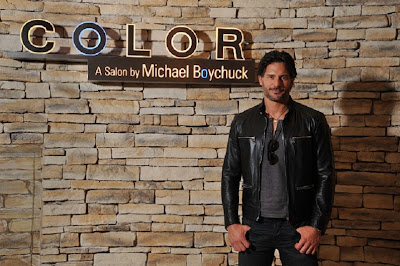 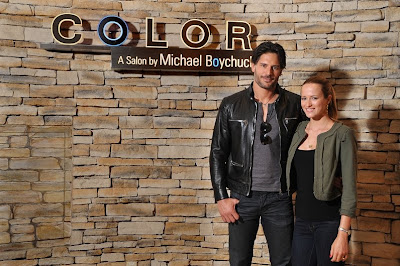