will make its triumphant return to Las Vegas this New Year’s Eve weekend. Its Vegas homecoming will reach new heights of madness as two experiences, Beacher’s Madhouse The Nightclub and Beacher’s Madhouse The Show, both under one roof, will be unveiled to guests with never-before-seen acts and non-stop entertainment five nights a week.

Tickets for the nightclub are now on sale and can be purchased by calling (323) 785-3036 or visiting beachersmadhouse.com. Beacher’s Madhouse The Nightclub will be open Wednesday through Saturday from 10:30 p.m. until late. The venue will be closed Sunday through Monday. Guests must be 21 years of age or older.

Beacher’s Madhouse The Show
Beacher’s Madhouse The Show will take guests on a journey into the unconventional world from the moment they first enter the 8,500-square-foot performance theater. Pushing the boundaries of entertainment and fantasy, the legendary variety show will take the madness to new levels as thrill seekers are pulled from their ordinary existence into a fantasy-filled realm while world-renowned spectacles take place five nights a week.  Known for stretching the limits of imagination, Beacher’s Madhouse has made a name for itself amongst Hollywood’s elite including Johnny Depp, Fergie and Josh Duhamel, Miley Cyrus, Vanessa Hudgens, Kim Kardashian, Selena Gomez, Ryan Seacrest, Justin Bieber and many more.

Tickets for the show will be available for purchase starting Monday, Dec. 9 at 10 a.m. PST by calling (323) 785-3036 or visiting beachersmadhouse.com. Beacher’s Madhouse The Show will be held Tuesday through Saturday at 8 p.m. The venue will be closed Sunday through Monday. Guests must be 21 years of age or older.

As the summer comes to an end, WET REPUBLIC at MGM Grand Hotel & Casino

reveals its A-list DJ lineup for October featuring two weekends of non-stop entertainment. Top-tier turntable artists including (in alphabetical order) Calvin Harris, Laidback Luke, NERVO and Steve Aoki, among others, will take over the iconic DJ booth one last time as sun-kissed partygoers flood the pool decks to say farewell to another unrivaled season.

The ultra pool will bring its sixth pool season to an end with the ultimate daytime bash Sunday, Oct. 13 welcoming industry leaders, locals and poolgoers alike as resident electronic music superstar Calvin Harris hits the turntables for the last time this season. Weekend after weekend Sin City’s ‘It’ summertime destination welcomed thousands of bikini-clad beauties when they flocked to the hot spot to party under the desert sun as world-renowned DJs spun their infectious beats. From eye-catching LED productions to champagne spraying, cake throwing and crowd surfing, 2013 has been one of the greatest seasons in WET REPUBLIC history and has set the standard in daylife revelry yet again.

Tickets are on sale now for this event and can be purchased by visiting wetrepublic.com. Weather permitting, WET REPUBLIC will remain open Saturdays and Sundays throughout the month of October.

Open Thursday through Monday from 11 a.m. to 6 p.m.  Cover charges, bungalow and cabana rental costs vary. For more information, visit wetrepublic.com or find us on Facebook, Twitter and YouTube. Guests must be 21 years of age or older.

Calling all sexy lads and lasses! Follow the rainbow to Hyde Bellagio for a St. Patrick’s Day-themed XIV Vegas Sessions Sunday, March 17.  Partygoers are encouraged to don festive green hues and fasten their kilts for XIV’s wild take on the traditional Irish holiday. The bash will begin at 5 p.m. and last until the top of the mornin’ when the sun comes up.

Celebrating the luck o’ the Irish, Hyde will transform into a world where all green glows neon and shamrocks abound. Guests will embrace the good cheer and sip on green beer as they party under champagne showers alongside provocative leprechauns. Bagpipes can be left at home, as the hottest house beats will be spun by DJs Julien Nolan, Zen Freeman and D4N13L.

XIV Vegas Sessions debuted at Hyde Bellagio in January 2012 bringing a new level of energy and creativity to the Vegas club scene. Hyde reincarnates the notorious day party, which began as “XIV Summer Sessions” in LA, in Vegas-sized proportions. One Sunday a month in Sin City, the Sunset Strip meets the Vegas Strip for an outrageously imaginative party that starts as the sun sets and doesn’t end until it rises again. Themes vary, but costumes are always encouraged; neon is ubiquitous and signature champagne showers flow freely. Check out a glimpse of the Neon Jungle party that ensued at Hyde Bellagio last month.

Countdown to Aid for AIDS of Nevada’s 2012 AIDS Walk Las Vegas
with Fundraising Tweetup at Blue Martini
Monday, April 9 from 8 to 10 p.m

In anticipation of the 22nd annual AIDS Walk Las Vegas, Aid for AIDS of Nevada (AFAN) will host a fundraising Tweetup during Blue Martini’s Manic Mondaze event on Monday, April 9 from 8 to 10 p.m.

For a donation of $20, partygoers are invited to mix, mingle and tweet while enjoying an open bar provided by Van Gogh vodka.  All proceeds from the event will benefit AFAN, Nevada’s largest nonprofit serving the HIV/AIDS community.

For more information and to RSVP to the event, please visit http://bit.ly/H7NOR5.

AFAN hosts the official AIDS Walk Las Vegas at the University of Nevada, Las Vegas (UNLV) campus on Sunday, April 15 at 8 a.m. Participants may register for the AIDS Walk as individuals, join an existing team or start their own team. Registration is free, but a minimum donation of $50 per person is encouraged. To register, please visit AFANLV.ORG. To join the Penn & Teller Challenge, click here and follow the Penn & Teller Challenge link to ‘Join Our Team.’

About AFAN
Aid for AIDS of Nevada (AFAN) was founded in 1984 and is the oldest and largest AIDS service organization in the state of Nevada. 2009 marked AFAN’s 25th anniversary of practicing its unyielding commitment to the community by providing unparalleled health expertise, support and advocacy for adults and children living with and affected by HIV/AIDS in southern Nevada. Over the years, AFAN has created various programs that offer consistent and comprehensive assistance including direct client service programs, food programs, prevention and education programs and community outreach.  As part of AFAN’s mission, these client service programs assist in enhancing the physical health and psychosocial wellness of the individuals they serve, while promoting dignity and improving the quality of their lives. For more information, please visit www.afanlv.org.

Time to pull out the vintage jerseys and face paint as RHUMBAR’s spacious outdoor patio becomes the ultimate tailgating spot this fall. Saturdays, Sundays and Monday nights, football fanatics will enjoy tailgating on the patio with an enticing roster of power plays and drink specials.

On Saturdays and Sundays, partygoers will enjoy hours of football along with a noon to 6 p.m. happy-hour. Several drink specials will also be available including, $5 Stoli Cocktails, Rum Punch, 16-ounce bottles of Miller Lite, Sam Adams, $20 60-ounce pitchers of Miller Lite. For Monday Night Football partygoers, $30 buckets of six Miller Lites will be available. With multiple big screen televisions and delicious cocktails, football fanatics will be sure to enjoy their time, even if their favorite team doesn’t pull through. During games, pigskin fans will receive complimentary cover and are encouraged to get decked out in their team’s colors as they gather for the only football tailgate party outside on the Strip.

Recently named one of AOL.com’s top Las Vegas patios, RHUMBAR is a highly stylized cocktail and cigar lounge inspired by the cool mood of the Caribbean. The plush outdoor patio is reminiscent of a tropical retreat offering a picturesque location for guests to mingle, sip cocktails, and smoke cigars. Located near the main entrance of  The Mirage

, RHUMBAR is owned and operated by Drive This! Entertainment. The lounge and patio are open from 11 a.m. until midnight Sunday through Wednesday, and 11 a.m. until 2 a.m. Thursday through Saturday. Be sure to follow RHUMBAR on Twitter @RHUMBAR and become a fan on Facebook at www.Facebook.com/Rhumbar. For more information visit www.DriveThisEntertainment.com.

PBR Rock Bar & Grill will commemorate National Day of the Cowboy on Sunday, July 24, with a special bull riding competition for the most daring patrons willing to take on the daunting mechanical bull.

The competition will be open for all revelers to participate and appoint the top three riders open bar tabs for $200, $100 and $50, respectively. 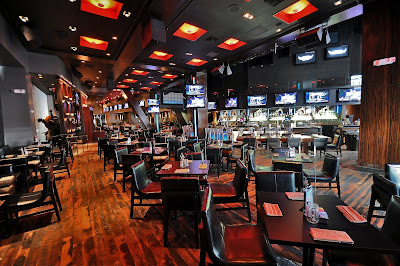