Teen Vogue is Instantly Charmed by Kina Grannis at Her Sold-Out NYC Show! Catch Her on Her Headlining US Tour Supporting Debut Album Stairwells – Out Now 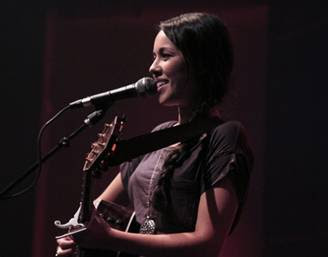 The first of two shows at the venue, Kina charmed the crowd with a 15-song set of pieces from the original and new deluxe version of Stairwells, which is out now. Between performing her songs, like hit “Valentine” (the video for which has been viewed over 7 million times and counting on You Tube,) she chatted with the adoring crowd who shouted out questions—like ‘where did you get your dress?!’—in between each tune…”

Read the full article and see her setlist from the show here: http://www.teenvogue.com/industry/blogs/music/2011/04/concert-report-kina-grannis-hits-nycs-highline-ballroom-for-two-sold-out-shows.html#ixzz1Jtbmfric

Kina Grannis is currently on her headlining US tour in support of her debut album Stairwells – out now on One Haven Music. Already, she’s sold out both her NYC headlining shows at the Highline Ballroom, her date at Chicago’s Lincoln Hall, both upcoming Jammin Java shows in Washington, DC and more! Catch her on the road at the confirmed dates below.

15th The Venue Vancouver, BC