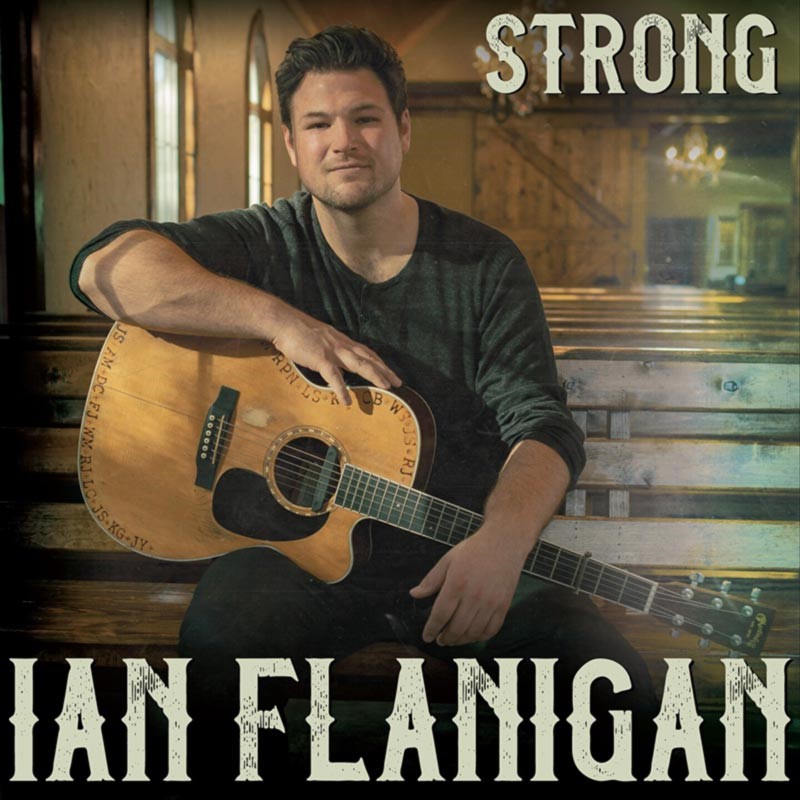 Includes singles “Grow Up,” “Under A Southern Sky,” and “Last Name On It”

“This is the Voice and the music that America voted for! I’m a huge fan of Ian’s and the title of the album says it all…STRONG!” – Blake Shelton

“Ian is a great talent and STRONG is a great album. Look out for this guy because his future is looking bright!!!!” – Joe Bonsall / Oak Ridge Boys

“Ian Flanigan distinguishes himself from the crowded field of new male artists with a smooth, rich voice and smoky tone that infuses each song with warmth and relatability. From the sensual “Help Me Drink this Wine” to the wistful anthem “Grow Up,” which features Blake Shelton, Flanigan consistently serves up nuanced performances of well-crafted songs. STRONG is a solid effort by an impressive young vocalist with a bright future.” – Deborah Evans Price / Billboard

“Ian Flanigan has a great story about spending time on the road as a professional nomad. But it was time well spent, as he learned how to entertain on stage and write heartfelt songs off stage. A third-place finish on ‘The Voice’ doesn’t do him justice. His smoldering voice, honest songwriting, and unique guitar skills produce a sound that fits today’s country music charts.” – Gene McKay / CountryInsider.com

“There are lots of great songwriters represented like Jon Randall, Jessi Alexander, Mark Irwin, Jessi Jo Dillon, Jonathan Singleton, Wade Kirby, Pete Sallis, Shelby Lee Lowe, among others. But the songs that really hit me about this album were solo writes by Ian, himself. The warmth of Home Sweet Home. The redemption in Devil in My Hands. The inspiration in Shine Again. Those cuts all fortify that Ian Flanigan is more than just a pretty voice.” – Devon O’Day, Mainstreet Today

“With Ian Flanigan’s distinctive voice, his new album ‘Strong’ will give country music fans 11 songs to call their ‘favorite’ with these soulful, inspiring and get through life ballads.” – Judy Shields, The Hollywood Times

“Ian Flanigan’s new full-length album “Strong” shows off the smoothest baritone voice in country music today. With powerful tracks like “Under the Southern Sky,” “Strong,” and “Devil in My Hands” you get Chris Stapleton, Waylon Jennings, and a bit of Kris Kristofferson all rolled into one person. Ian goes from balladeer to rebel and back on one of the best album releases of 2022. Ian Flanigan is a surefire superstar! He has lit country radio on fire with ‘Strong’!” – Ward W. Bond, PhD – TV host of The Dr. Ward Bond Show

Country music singer/songwriter and The Voice Season 19 finalist Ian Flanigan’s debut album STRONG is available now. Offering a wide array of timeless tracks, Flanigan encompasses subjects from all walks of life including heartbreak and pain to a love that is everlasting, leaving no stone unturned. Over the last year, Flanigan has consistently released beloved singles such as “Grow Up” featuring Blake Shelton, “Under A Southern Sky,” and “Last Name On It,” showing not only his versatility as a singer but as a songwriter as well. His bold vocals soar on each track showcasing his one-of-a-kind talent, creativity, and ability to take every listener on this incredible journey each step of the way. STRONG was co-produced by Grammy winners Craig Alvin (Little Big Town, Amy Grant), Todd Lombardo (Kasey Musgraves, Brett Eldridge), Obie O’Brien (Bon Jovi, Levon), and Phil Nicolo (Sting, Aerosmith).

“For me, strength has always come from the support of the folks I hold dear,” shares Flanigan. “I made this record to feel like stepping out of the loud and busy world after a hard day’s work, taking off your boots, and having a seat with my loving family in the living room. My family would love for you to be our guest to enjoy this ride with us.”

Flanigan recently joined Zac Brown Band co-founder, John “Hop” Hopkins in Kingston, New York for Hop On A Cure to raise money for ALS, which Hopkins is battling. Hop On A Cure raised over $23,000 and Flanigan not only performed his own set, but was brought back onstage for two additional songs with Hop and the band. Flanigan also made his recent debut at CMA Fest performance on the Maui Jim Reverb Stage, performing fan-favorite original music, and has been traveling the United States performing shows as well as an extensive radio tour. As part of the album release, fans can not only order the album digitally but can also purchase a limited edition vinyl record at ianflaniganmusic.com/strongpreorder.

To keep up with future releases and everything Ian Flanigan, visit HERE and follow his social channels linked below.

About Ian Flanigan:
For the last decade, troubadour Ian Flanigan has toured his whiskey-soaked voice and evocative lyrics across America, with a country sound reminiscent of Joe Cocker and Chris Stapleton. In 2020, Flanigan was a celebrated finalist on NBC’s The Voice, finishing third as the representative from Team Blake. The country music world has since tapped him as an up-and-coming artist to watch. Flanigan has since then, continued to tour as direct support to Trace Adkins and Chris Janson, he has released his debut single, “Grow Up” featuring Blake Shelton (over 3 million streams), he represents Taylor Guitars, KICKER AUDIO, Denon, and PickleJar, gains exposure as a Reviver Publishing writer in Nashville, and his debut album ‘STRONG’ will be available September 2 on Reviver Records.