What is Christmas with no “SNOW”? 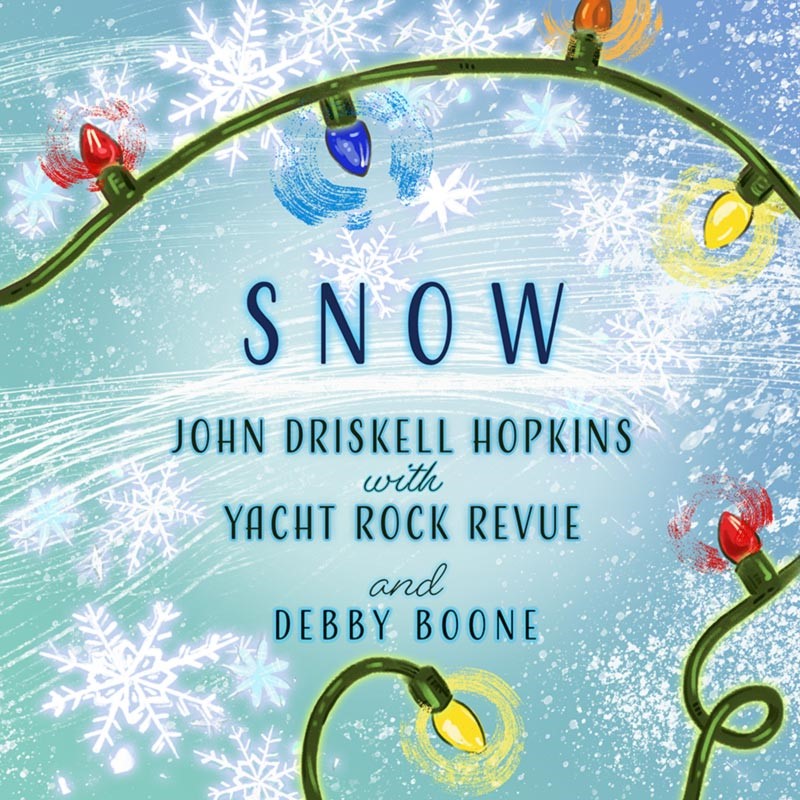 John Driskell Hopkins, founding member of the GRAMMY-winning Zac Brown Band performed “You Light Up My Life” by three-time GRAMMY winner Debby Boone for his friends and family at the age of 6 at a Christmas gathering in 1977. 45 years later, while recording his fourth Christmas album, Hopkins was gifted an original pressing of “You Light Up My Life” and though he could only dream of once singing with one of his greatest inspirations as a performer, Debby enthusiastically agreed to join him on the song “Snow”, once recorded by her mother in law, Rosemary Clooney.

“I had no idea the afternoon I got the call from Hop, what kind of blessing was entering my life,” shares Boone. “I just loved the idea that this talented and successful guy would want me to do a duet with him enough to fly me to Atlanta, and put me up. It went from recording the song to making a video as well. Every part of the experience was first rate from his beautiful, state-of-the-art studio to the band and the video crew. I was so impressed!”

Rolling Stone Country premiered the “SNOW” music video on Friday, and Time Life has partnered to release the song across all streaming platforms. Read and view the Rolling Stone premiere here and stream/download “SNOW” here.

“To know Hop is to love him,” Boone continues. “He exudes a gentle kindness that immediately made me relax so I could enjoy every second of recording. As I was leaving that afternoon he told me about his diagnosis and his plans to raise a lot of money for ALS research. However I can join forces and support him and his efforts, I am in.”

“I started doing research for my fourth Christmas record that was smooth sounds of the ’70s and ’80s and I enlisted Yacht Rock Revue, who I’ve known for many years and who are dear friends of mine,” shares Hopkins. “When we were looking for features, one of the first people that came into my head was Debby Boone not only because she was Best New Artist in 1978, but because when I was six in ’77, I used to sit in front of the record player and listen to “You Light Up My Life” over and over and over. It was the first song I ever performed for my family and for my extended friends, the first song that I remember that was popular that I learned in its entirety. When I reached out to her website, it was just kind of a shot in the dark, I hold her in such high regard from that treasured memory as a child and I knew that she had a pedigree of fame and a massive genealogy – She’s A Star! – You know, so I just reached out to her management through the website and I was on cloud nine when she replied. I got a chance to speak to her and she was very excited to be a part of the Christmas album. I couldn’t be more thrilled with the way it’s turned out. She’s lovely, she’s a wonderful person and I think we’ve become friends and I think we will remain friends for the rest of our lives. She’s my Debby Boone now, she was always my Debby Boone, but now she’s really my Debby Boone.”

This season, though there is so much to celebrate, there is also much to cherish every day since Hopkins was diagnosed with ALS on December 21, 2021. Hopkins announced his diagnosis and the launch of Hop On A Cure Foundation, Inc. on May 30th, 2022. Hop On A Cure is committed to supporting research to prevent, reverse, and cure ALS while raising awareness, building a compassionate community, and unleashing the healing power of hope. ALS, which, only a few years ago, was thought of as an uncommon disease that affected 1 in 20,000 people, now is expected to affect 1 in 300 men, women, and children during their lifetime. There is an expected increase of 40% in ALS cases over the next decade.

For more information on John Driskell Hopkins and Hop On A Cure, visit johndriskellhopkins.com. For Debby Boone, visit debbyboone.com.