William Lee Golden and The Goldens Release “If I Could Only Hear My Mother Pray Again” Music Video, Premiered By Taste Of Country

“When you listen to these three albums, you can hear William Lee Golden and the Goldens give that family feeling where you feel like you’re in the same room with them—sitting around the living room, singing together, and just having fun.” – M Music & Musicians Magazine, MMusicmag.com

“I am so proud of William Lee. This 3 album set is masterful and heartfelt! Golden has always been about family and music and along with his boys they have created a musical masterpiece and besides that, I find the retro feel of the great old songs quite appealing.” – Joe Bonsall, The Oak Ridge Boys

“I’ve long been a fan of William Lee Golden and his talented sons, and these three new albums are an absolute treasure. I love that William Lee, sons Chris Rusty and Craig, and his grandson Elijah along with friend and bass singer Aaron McCune have revived some of the most potent songs in the American songbook from the stone-cold country of ‘Long Black Veil’ to Tommy Petty’s ‘Southern Accent’ to gospel classic ‘Power in the Blood.’ This is a landmark project in the Country Music Hall of Famer’s legendary career and the fact that it’s a family affair just makes it all the sweeter.” – Deborah Evans Price, Billboard

“Maybe one of the best things to come out of the pandemic shutdown was the time William Lee and his boys had to spend together. And the best thing for us is this project! What a treasure they have recorded, where each member of the family brought their own ideas, and then together as a family, they literally put memories together with music. There is something for everyone and every mood. Thank you William Lee for raising these wonderful boys who are The Goldens.” – Jeannie Seely

“A Golden moment times 3! William Lee Golden and the Goldens have given us a gift of timeless music with their one-of-a-kind family harmonies. From Gospel favorites to Pop and Country Rock and Vintage Country Classics in three full albums, through 31 songs, The Goldens have delivered a must-have collection of memories.” – Dennis Banka, WUCZ Morning Show Host

“From those warm nights singing on the porch with family to the best songs you car-sing at the top of your lungs, William Lee Golden and the Goldens have it all in their new 3 album set. It’s your new best friend for your musical journey.” – Devon O’Day, Host of Main Street Today

Country and Gospel Music Hall of Fame and Grand Ole Opry member William Lee Golden and his sons ‘The Goldens’ join together in perfect harmony with the release of their music video, “If I Could Only Hear My Mother Pray Again” from their three-album set, ‘Golden Classics.’ Paying tribute to mothers everywhere, this video is very special to William Lee Golden, whose mother, Rutha Mae Golden is honored at the beginning of the video. Also throughout, Chris and Rusty Golden honor their mother, Frogene Golden as well with family photos. Each group member’s talent shines bright with every word on their version of this classic gospel hymn. “If I Could Only Hear My Mother Pray Again” can be found on their “Old Country Church” gospel album included in ‘Golden Classics’ along with ‘Country Roads’ and ‘Southern Accents.’ ‘Golden Classics’ is the highly anticipated three-volume set that contains over 30 songs spread across several genres that all have had an impact on the lives and careers of William Lee Golden and The Goldens. Recently, they made their Grand Ole Opry debut as a family and will return once again on October 27! The music video for “If I Could Only Hear My Mother Pray Again” was premiered by Taste Of Country and the single is available to download on all digital platforms!

“My mother, Rutha Mae Golden was such an influential person in my life,” shares William Lee Golden. “She raised us kids to love the Lord and each other as well as our fellow man. I miss my mother every day and it was important to include her. My son’s mother, Frogene Golden, was an amazing mother to them and we all wanted her included as well. If you are fortunate to still have your mother, never take her for granted and love her every minute, because one day she won’t be here and all you will have left are the cherished memories.”

‘Southern Accents,’ ‘Country Roads’ and ‘Old Country Church’ were recorded when Golden gathered his sons Rusty, Craig, and Chris, his grandchildren Elizabeth, Rebekah, and Elijah, and friends Aaron McCune, and Ben Isaacs to bring their fresh interpretations to longtime favorites. William Lee Golden and The Goldens deliver reminiscent renditions of Johnny Cash’s “I Still Miss Someone,” and Jim Reeves’s “Welcome to My World.” Chris shines on Tom Petty’s “Southern Accent,” while Rusty delivers a vibrant take on Bob Seger’s hit “Hollywood Nights” and Craig, the rarely heard Golden, revives Gregg Allman’s “Multi-Colored Lady.”
Country Roads
1. I Still Miss Someone
2. Four Walls
3. Welcome To My World
4. Take Me Home Country Roads
5. You Are My Sunshine
6. The Great Speckled Bird
7. Green Green Grass Of Home
8. Send Me The Pillow That You Dream On
9. For The Good Times
10. I Saw The Light 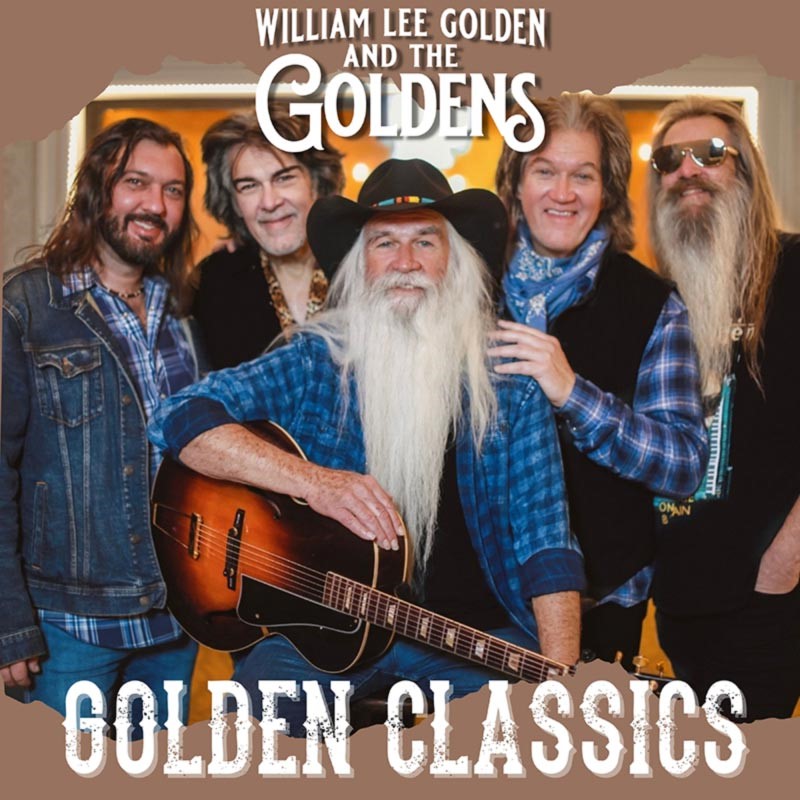 More About William Lee Golden and The Goldens:
There are few things more powerful than family harmony and rarely has that been more evident than on the three new albums recorded by Country Music Hall of Fame and Oak Ridge Boy member, William Lee Golden who, along with his talented sons have created William Lee Golden and The Goldens. The Brewton, Alabama native cements his considerable legacy in the music industry with three distinctive collections that reflect his musical roots and the journey that has made him one of America’s most unique troubadours. From revered gospel classics to beloved country gems and iconic rock favorites, Golden leads his family through the songs that have been stepping stones on his well-traveled musical journey. It all comes together as a rich sonic tapestry that fans will cherish. For more, visit williamleegoldenandthegoldens.com.