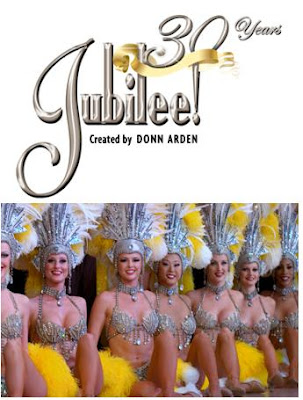 After 18,720 Shows, Entertaining More Than 18 Million Guests and Dancing
Through Over 500,000 Pairs of Tights, Jubilee! is the Longest Running Show
on the Las Vegas Strip

All anniversaries are special, but on July 30, 2011, Jubilee! at Bally’s Las Vegas will not only celebrate its Pearl anniversary; it will secure a place in Las Vegas history as the longest-running show on the famous Las Vegas Strip. The iconic and ultra-glamorous Showgirl has become synonymous with Las Vegas, and Jubilee! proudly stands as the last production show of its kind. Conceived, staged and directed by the legendary Donn Arden, the elaborate retro-glam extravaganza features lavish costumes, dazzling scenery, world-renowned specialty acts, dynamic music, graceful pageantry and of course, gorgeous showgirls wearing their trademark bright shade of red lipstick.

While dancing shows have taken American television by storm and regenerated interest in dance as entertainment, Jubilee! at Bally’s Las Vegas put the spotlight on intricate dance moves back in 1981—the same time that Michael Jackson’s Thriller started its record-breaking run and “I Want My MTV” became a pop culture phenomenon. With 85 dancers of amazing stature (the true showgirl must be at least 5’8” and the men 6’0” and over), accomplished singers, and three specialty performances, Jubilee! is set in seven acts featuring original songs, dances and productions.

The Broadway meets Vegas Glitz production numbers are astounding in size and scope. The stage itself is 190 feet in length and 73 feet deep – making it half the size of a football field and 15 stories tall from the bottom of the orchestra pit to the roof. The show contains sequences not found on any other stage in the world, including amazing aerial stunts and memorable scenes such as “The Sinking of the Titanic” (where 5,000 gallons of recycled water cascade across the stage during the “iceberg” scene) and “The Destruction of the Temple by Samson.” The finale, which includes the famous Red Feather Fan number with the songs, “In the Still of the Night,” “Night and Day,” “Begin the Beguine,” and “Smoke Gets in Your Eyes,” has remained a show-stopper for the 30-year run. From beginning to end, Jubilee! features 100 different sets and backdrops,100,000 light bulbs and more than 125 miles of wiring. Additionally, 4,200 pounds of dry ice are used every week to create the smoke effects, and 10 pounds of explosives are used nightly in the 50 different pyrotechnical effects

The 85 showgirls and showboys who make up the historic cast are selected via casting calls held throughout the country several times a year. Not unlike the famed Rockettes, Jubilee! dancers are in a class by themselves, and over the 30-year history the show has featured more than a thousand dancers. With countless hours of rehearsals, choreography and mastering large productions and dance routines, what really separates the Jubilee! Showgirl is her ability to wear the world-renowned head dress, which can weigh up to 22 pounds.

With more than 1,000 costumes worn during the show, Jubilee! has also created 30 years of brilliant stage couture, with many of the costumes having been designed by famed designer Pete Menefee. The original cost for the costumes was $3.5 million, and 18 people currently work in wardrobe every night keeping the costumes in excellent shape. The rhinestones used on the costumers are silver plated Austrian Swarovski crystals, the highest quality rhinestone in the world. There was actually a worldwide shortage of rhinestones in 1981 because they were all being used to create the original Jubilee! costumes. Topaz, crystal, sapphire, emerald, ruby, amethyst and aurora borealis rhinestones are also used, and if all the jewelry from the show were weighed together, it would weigh 10,000 pounds. Mostly ostrich and pheasant feathers are used on the costumes, as well as rooster, turkey and vulture feathers.

“We know a woman never likes to tell her age, but we are so proud of the Showgirl turning 30,” laughs David Hoenemeyer, Bally’s Las Vegas regional president. “To now be reaching our 30th Anniversary is an amazing feat. It’s such an exciting time because there is obviously a renewed interest in dance and the dancers themselves. I think Jubilee! is a great example of how something unique, distinctive and extraordinary really never goes out of style. Big productions, concerts and special events come and go in Las Vegas, but only one show has outlived them all, and it’s Jubilee! We feel that we are bringing a bit of classic Las Vegas to our guests every night we perform.”

Tickets
Witness the mesmerizing special effects and pageantry of one of the longest running shows on the Las Vegas Strip nightly at 7:30 p.m. and 10:30 p.m. Jubilee! is dark on Fridays. Tickets can be purchased at the Bally’s Box office for $57.50 – $117.50.

In addition, the All-Access Backstage Walking Tour gives guests the once-in-a-lifetime opportunity to get behind the scenes of Las Vegas’ longest-running and most popular showgirl production. The tour is given by a Jubilee! showgirl or showboy. The tours, which are open to the public, are offered at 11 a.m. on Mondays, Wednesdays and Saturdays. Tickets can be purchased at the Bally’s Box Office for $17 or $12 with the purchase of a Jubilee! show ticket. Bally’s also offers private backstage tours for groups of 25 or more. The private tours include a make-up demonstration and a more in-depth look at the show. Private tours can be arranged seven days a week and are priced at $20 per person.

Bally’s Las Vegas
Bally’s Las Vegas is one of the strip’s most exciting resorts, offering guests a “classic Las Vegas” experience. The 44-acre property is located on the center of the world-famous Las Vegas Strip, across from Caesars Palace and next to Paris Las Vegas. Bally’s features two 26-story hotel towers, offering 2,814 guestrooms, including 265 suites. The resort features a first-class Sports Book, known for its stadium-style seating and abundance of TV screens. Bally Las Vegas is home to Donn Arden’s Jubilee!, the production that has been thrilling audiences since 1981 with its beautiful showgirls, music, lavish sets and spectacular choreography. Guests my also indulge in the world-famous “Sterling Brunch” each Sunday, featuring the finest array of food from around the world, including caviar, sushi, lobster and champagne.