Arriving after 1 a.m. the Billboard Hot 100 artist immediately hit the main stage performing many of his chart topping hits. Banks hopped on the mic addressing the crowd, “I have been doing this for ten years,” he said , “If you have love for Lloyd Banks put your hands up!” The crowd roared as clubgoers threw their hands in the air and cheered.

Performing crowd favorites such as “I’m So Fly,” “Karma,” “Beamer, Benz, or Bentley” and taking it back with “On Fire,” the admired artist threw his towel into the crowd and had the reveling clubgoers on their feet.

After a memorable performance, the artist took his seat at his VIP booth where he joined his entourage and admired guests, sipped champagne, and danced the night away.

In honor of Labor Day, Blue Man Group offers a 4 p.m. performance in addition to its regularly scheduled 7 and 10 p.m. shows on Sunday, Sept. 4. The added show gives visitors an extra chance to see the one-of-a-kind production during the extended holiday weekend. Blue Man Group performs nightly at 7 and 10 p.m.; Thursday, Sept. 1 is a dark day.

Wildly popular around the world, Blue Man Group defies simple description. A musical feast? Yes. A roller coaster of comedy? Absolutely. A stunning mix of technology and raw imagination? You bet. It’s all that and so much more. This explosion of color, humor, music, and technology comes to life every night in the custom-built Blue Man Group theatre at The Venetian® in Las Vegas. The show’s contagious energy engages the audience, thrilling adults and kids alike. It’s intense, exciting, interactive and above all – a must-see.

Ticket prices start at $59 plus tax and service fees.  Call 702.414.9001 or 1.800.blueman for ticket and show information. Special military and children’s pricing available. Ask about Blue Man Group’s dinner and VIP packages. Blue Man Group will be moving to the Monte Carlo Resort & Casino in the fall of 2012.  Visit blueman.com/vegas for more information. 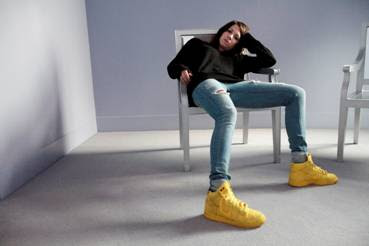 Check out K. Flay’s performance at 6:30pm today on the next installment of the Ideajam series, produced by Katalyst — a production company founded in 2003 by Ashton Kutcher and Jason Goldberg – and sponsored by Intel and Google/YouTube.

K.Flay just released her new series of 3EPs titled I Stopped Caring in ’96. Catch her on some upcoming dates with more info on the way. Also, keep up to date at her website: www.kflay.com

More on Katalyst:
Please join us on June 30th for the next installment of the ideajam series, produced by Katalyst — a production company founded in 2003 by Ashton Kutcher and Jason Goldberg – and sponsored by Intel and Google/YouTube. Katalyst produces creates groundbreaking original programming and social media content for film, television and the Web.

Ideajam is an opportunity for innovation and collaboration utilizing technology. Our first jams have received significant press attention and online buzz, with an average of over 10 million impressions on twitter and facebook per ideajam.

Each Ideajam brings together the brightest minds in an array of creative fields, including digital content creation, education, comedy and music. They are led by a moderator, well-known in their field, and joined by experts along with a group of hand-picked participants. These sessions are also open to the online community, who can interact via a host of social media tools.

The ideajam on June 30th will focus on the intersection of music and the Web. We will be inviting three popular YouTube music artists to join us for a day of professional development and production of an original song. Since making music visual is a key component to growing one’s fanbase, we’ll use Animoto to create a video for their original track that can also be shared online.

In addition, these performers will be given guidance from experts on how to develop their social following and market themselves online, as well as having one of their original songs produced by one of the top music producers in the game today.

Our hope is to ignite a conversation around technology and music, and allow for a robust dialogue, both in-studio and generated online with an interactive audience, all around the theme of “What Inspires You?”

We feel you’d be a perfect fit to contribute to this event and help inspire the creativity that keeps music alive.

Circus Couture presents a unique and extravagant evening called “The Revolution,” a performance, fashion and art event inside The Joint at Hard Rock Hotel & Casino at 7:30 p.m. on Sunday, June 26. Comprised of performers and employees of shows on the Las Vegas Strip, Circus Couture will donate the proceeds from the event to benefit St. Baldrick’s Foundation.

Circus Couture’s “The Revolution” features both a silent and live art auction as well as explosive circus performances intertwined with runway fashion. Circus Couture was born when team Cirque du SoBald, fundraisers for St. Baldrick’s, envisioned a rock ‘n’ roll charity event that would be hip, spectacular and original. In 2010 Circus Couture’s efforts yielded a $105,000 grant to Children’s Specialty Center of Nevada. They are the only clinic in the state that treats kids with cancer regardless of their family’s ability to pay for services. The event was an unprecedented fundraising and experiential success.

“This is a city built on entertainment; it’s what Las Vegas does best. It is also a community with a heart that cares about its children. Circus Couture is a natural extension of both,” said Circus Couture Artistic Director, Erica Linz. “Last year we invented the Circus Couture wheel. This year we send it spinning with a bigger and bolder spectacle to benefit Las Vegas kids. Wait until you see “The Revolution” we have planned.”

About St. Baldrick’s Foundation
St. Baldrick’s Foundation is the world’s largest volunteer-driven fundraising program for childhood cancer research. It funds more in childhood cancer research grants than any organization, with the exception of the U.S. government. Since 2000, events have taken place in 24 countries and 50 U.S. states, raising over $68 million. More than 106,000 volunteers have shaved their heads in solidarity of children with cancer, while requesting donations of support from friends and family – each one becoming a walking billboard for the cause. For additional information, visit http://www.stbaldricks.org/.

About The Joint, by Rogue
The Joint at Hard Rock Hotel & Casino is a 4,000-person capacity venue that serves as a sophisticated, intimate and unparalleled destination. The Joint features seven Luxury Suites, a VIP Studio Level, state-of-the-art sound system, superior video system and a production package tailor-made for artist comfort. It has received numerous accolades including “Best Concert Venue” in Las Vegas Review-Journal’s “Best of Las Vegas” awards in 2010 and 2011, “Best New Major Concert Venue” at the 2010 Pollstar Awards, and “Best Live Music Venue” in AOL City’s Best 2010 awards. The Joint delivers unforgettable live music experiences with an ongoing roster of legendary artists taking its stage including the first rock ‘n’ roll residency in Las Vegas with Carlos Santana’s Supernatural Santana: A Trip Through the Hits, Paul McCartney, The Killers, Bon Jovi, Kenny Chesney, Arcade Fire, Motley Crüe, Avenged Sevenfold, Alice in Chains, Paramore, Muse, Drake and No Doubt. The venue is also home to Tiësto In Concert, a groundbreaking live show created exclusively for The Joint featuring the world’s No. 1 electronic DJ and producer Tiësto. For additional information, call 702.693.5583 or 702.693.5000. HardRockHotel.com / TheJointLasVegas.com. Keep up with the latest updates on The Joint via Facebook and Twitter.

Singer J. Holiday Wins the Ladies Over with a Performance at LAX Nightclub

Last night solo artist, J. Holiday was the main attraction in Las Vegas as he performed at LAX Nightclub at Luxor. Earlier that evening the singer was spotted dining at Social House inside Crystals at CityCenter for the launch of Kudasai. The artist was joined by his friends dining on delicious menu items including Mini Kobe Burgers, Spicy Ponzu and a Chef’s selection of dessert. Following the tasty meal the entourage headed to the nightclub making an entrance just before 1 a.m.

Once inside, the crowd was treated to an exclusive performance by the Billboard Hot 100 artist singing some of his hit singles including “It’s Yours,” and “Suffocate.” Before Holiday closed with a club favorite, “Bed,” he went into the crowd, doing what he does best, singing to and flirting with the ladies winning them over with his smooth style. Following his performance he addressed the clubgoers saying, “Everybody get drunk, because we are ready to party.” The down-to-earth singer took some time to visit a few of the VIP tables nearby taking photos with his fans before returning to his table and partied early into Thursday morning. 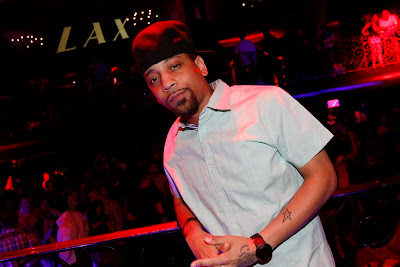 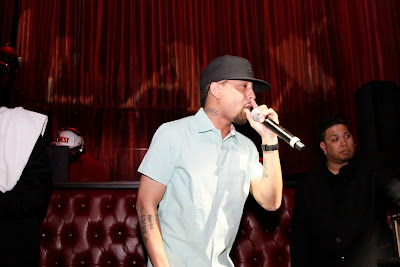 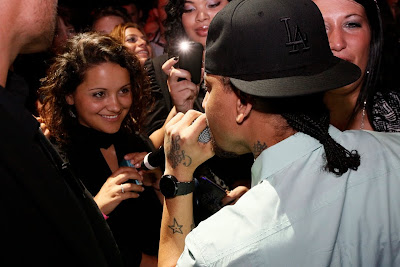 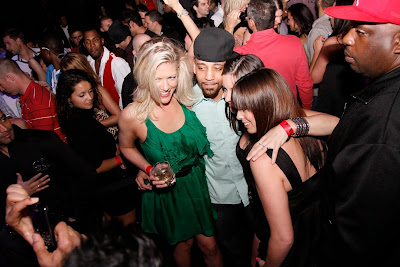