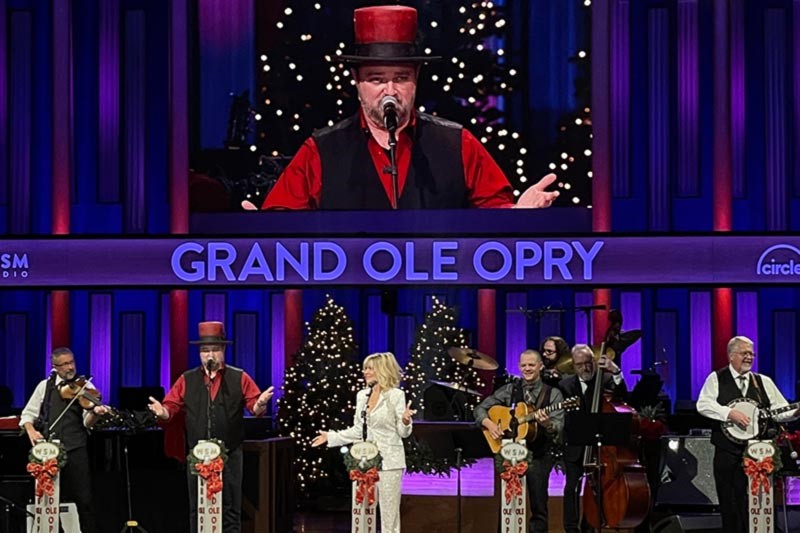 John Driskell Hopkins, founding member of the GRAMMY-winning Zac Brown Band and three-time GRAMMY winner Debby Boone graced the Grand Ole Opry stage Friday night for their new single “SNOW”, once recorded by her mother-in-law, Rosemary Clooney. Backed by Balsam Range, Hopkins and Boone created a magical moment bringing to life once again this holiday classic using a Yacht Rock sound and the catchy lyrics “What is Christmas with no snow, no white Christmas with no snow” leaving everyone ready for a white holiday season. Boone also surprised the audience with a beautiful performance of “You Light Up My Life” that brightened the room and brought the audience to their feet.

“It is truly an honor to have performed with both Debby Boone and Balsam Range on one of the world’s most iconic stages,” shares Hopkins. We are so excited about our single “SNOW,” and it has been a wonderful Christmas season already. I hope it is for you as well!”

“Standing in the circle of the Grand Ole Opry stage is incredibly meaningful for me connecting me to my grandfather Red Foley, and my mother-in-law Rosemary Clooney who stood there together many years ago,” shares Debby Boone. “Now to sing at the Opry with Hop doing a duet of a song from ‘White Christmas’ adds another rich layer to this experience. I am so honored to have had this opportunity.”

This season, though there is so much to celebrate, there is also much to cherish every day since Hopkins was diagnosed with ALS on December 21, 2021. Hopkins announced his diagnosis and the launch of Hop On A Cure Foundation on May 30th, 2022. Hop On A Cure is committed to supporting research to prevent, reverse, and cure ALS while raising awareness, building a compassionate community, and unleashing the healing power of hope. ALS, which, only a few years ago, was thought of as an uncommon disease that affected 1 in 20,000 people, now is expected to affect 1 in 300 men, women, and children during their lifetime. There is an expected increase of 40% in ALS cases over the next decade.

For more information on John Driskell Hopkins and Hop On A Cure, visit johndriskellhopkins.com or hoponacure.org. For Debby Boone, visit debbyboone.com.