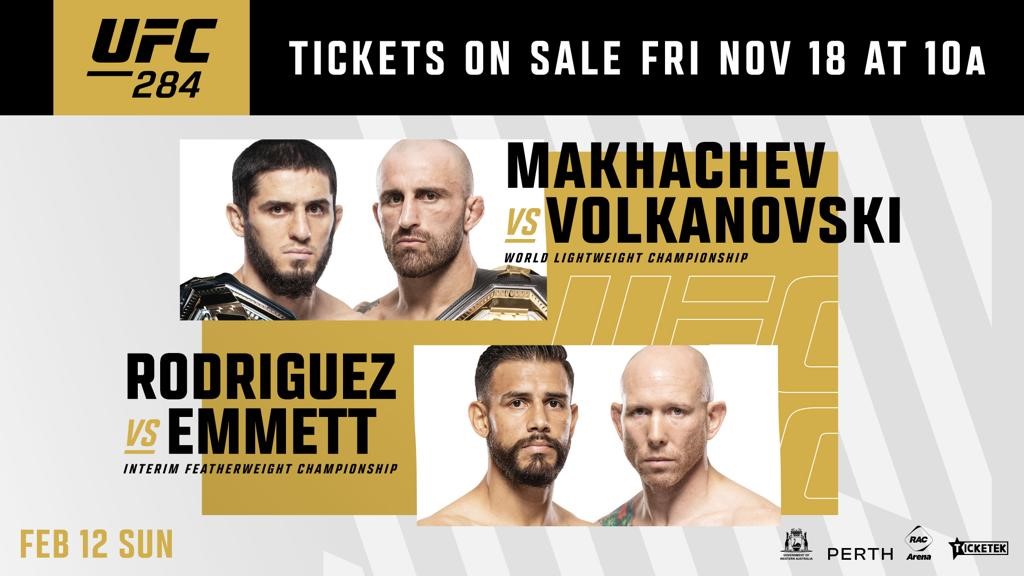 TICKETS FOR UFC® 284: MAKHACHEV vs. VOLKANOVSKI
ON SALE FRIDAY, NOVEMBER 18

The world will be watching when the Octagon® makes its historic return to Australia on Sunday, February 12, with UFC® 284: MAKHACHEV vs. VOLKANOVSKI booked for Perth’s RAC Arena. Australia’s UFC featherweight champion and No. 1 Men’s Pound-for Pound, Alexander “The Great” Volkanovski will take on newly crowned UFC lightweight champion, Islam Makhachev in a five round championship bout.

In partnership with the Western Australian Government, through Tourism Western Australia, this event marks UFC’s return to Perth with a Pay-Per-View event following the success of UFC® 221: ROMERO vs. ROCKHOLD in February 2018 in front of a capacity crowd.

Tickets limited to four (4) tickets per person. To access this presale, fans may register at UFC.com/Perth.

Aussie legend, Alex Volkanovski (25-1, fighting out of Windang, NSW) will attempt to make history yet again by becoming the first Australian to reach double champ status. Volk is set to take on UFC lightweight champion, Islam Makhachev (23-1, fighting out of Makhachkala, Russia) who claimed an impressive submission win over Brazilian Charles Oliveira to gain the undisputed lightweight championship title only last month.

In another highlight for the Aussie fans, No.1 UFC middleweight and former champion, Robert “The Reaper” Whittaker (25-6-0, fighting out of Sydney Australia) will take on No.6 ranked middleweight, Paulo “The Eraser” Costa (14-2-0, fighting out of Contagem, Minas Gerais, Brazil) in the three round middleweight bout. The beloved Bobby Knuckles was originally due to face the Brazilian powerhouse in April 2021, however, Costa withdrew due to illness, leaving Whittaker to finally face Californian, Kelvin Gastelum. Whittaker has been on an absolute tear since his loss to Adesanya, keeping him at that No.1 spot and no doubt ready to put on another showstopper for the fans.

Also joining two of Australia’s best on the stacked summer card will be:

The current performance schedule for Sunday, February 12, has UFC 284 kicking off at 7:15 a.m. AWST with the UFC Fight Pass Prelims. The action will continue with the Prelims at 9:00 a.m. and the Main Card at 11:00 a.m. Please note, this is subject to change.

Additional bouts UFC® 284: MAKHACHEV vs. VOLKANOVSKI will be announced in the coming weeks.

While in Perth, UFC featherweight champion, Alex Volkanovski and No.1 UFC middleweight Robert Whittaker will be at Yagan Square Amphitheatre from 5 p.m. tonight, Wednesday November 16, for a Fan Q&A Session. This event is free and open to the public.

All bouts are live and subject to change.

UFC® is the world’s premier mixed martial arts organization (MMA), with more than 688 million fans and 211 million social media followers. The organization produces more than 40 live events annually in some of the most prestigious arenas around the world, while broadcasting to nearly 900 million TV households across more than 170 countries. UFC’s athlete roster features the world’s best MMA athletes representing more than 75 countries. The organization’s digital offerings include UFC FIGHT PASS®, one of the world’s leading streaming services for combat sports. UFC is owned by global entertainment, sports and content company Endeavor, and is headquartered in Las Vegas, Nevada. For more information, visit UFC.com and follow UFC at Facebook.com/UFC, Twitter, Snapchat, Instagram and TikTok: @UFC.