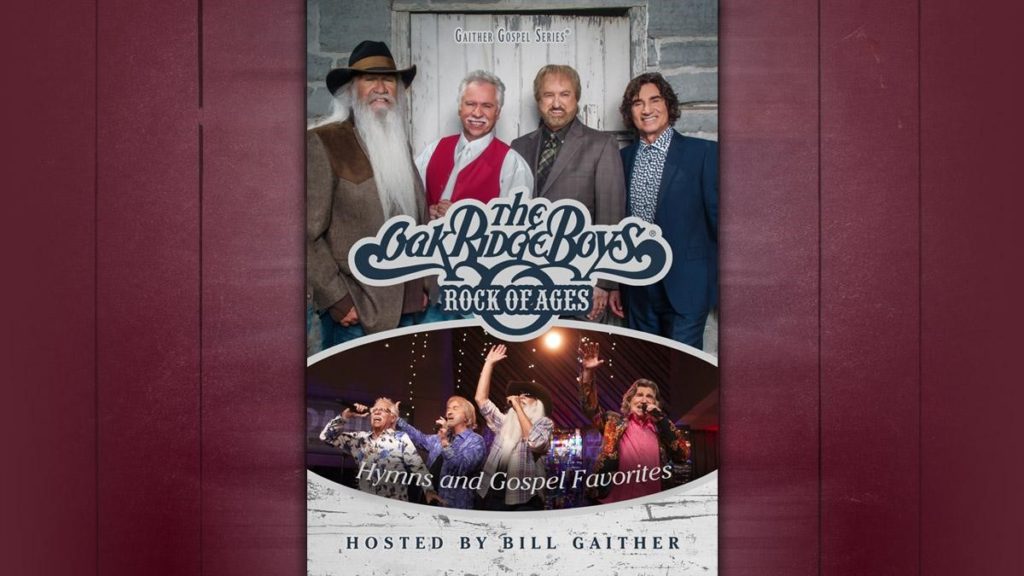 Click Here to Pre-Order the DVD or Stream the Album

Gaither Music Group is thrilled to announce the upcoming release of a new DVD–Rock of Ages–from the legendary country and gospel music group The Oak Ridge Boys. As a part of Gaither’s widely-popular Gaither Gospel Series®, the GRAMMY® Award-winning vocal group brings to the stage their heartfelt renditions of fifteen of their favorite hymns and gospel classics.

Set for release on January 21, the Rock of Ages DVD spotlights a diverse collection of some of the most treasured Gospel music classics and timeless hymns, while showcasing The Oak Ridge Boys’ unmistakable, four-part blends. A long-awaited companion to their popular Rock of Ages CD (Gaither Music Group, 2015), Duane Allen, William Lee Golden, Joe Bonsall, and Richard Sterban bring new arrangements to beloved songs such as “In the Sweet By and By,” “In the Garden,” “I Love to Tell the Story” and more. Packed with powerhouse vocal performances, the DVD includes a guest appearance from GMA Hall of Fame members The Isaacs, a tribute highlighting country music icon Merle Haggard’s vocals on the song “Sweet Jesus” as well as a never-before-seen interview with the group’s longtime friend and gospel music legend Bill Gaither.

A Rock of Ages TV special is currently airing on PBS, Circle TV, TBN, RFD-TV, GaitherTV, TCT, Heartland, and CTN. The special will also be airing in Canada on Vision TV, CTS, The Miracle Channel, and Hope TV. The Rock of Ages TV special will premiere on the Gaither Music TV YouTube channel on Thursday, January 27, and can be watched on the GaitherTV platform which is available on Roku, Amazon FireTV, AppleTV, Android TV, iOS, and GooglePlay.

The Rock Of Ages DVD will be available at online accounts, retail stores, and at Gaither.com; and individual music videos from the release will be available at all digital streaming accounts and on the Gaither YouTube Channel (over 2.4 million subscribers and over 2.3 billion views). The first two digital singles, “In the Sweet By and By” and “I Love to Tell the Story” are available to watch now across all digital video platforms.

Watch the official video for The Oak Ridge Boys – “In The Sweet By And By” below:

For more information on The Oak Ridge Boys, visit their website or follow them on social media.

About The Oak Ridge Boys:
The Oak Ridge Boys have sold over 41 million units worldwide and are synonymous with “America, apple pie, baseball, and country music.” In addition to their awards and accolades in the country music field, the Oaks have garnered five GRAMMY® Awards, sixteen GMA DOVE Awards, and two American Music Awards. The group—Joe Bonsall, Duane Allen, William Lee Golden, and Richard Sterban, members of the prestigious Country Music Hall of Fame (2015 Inductees) and the Grand Ole Opry (since 2011)—is known worldwide as one of recording history’s most extraordinary musical successes. They have charted single after single and album after album, celebrating two double-platinum albums and more than 30 Top 10 hits, including No. 1 chart-toppers “Elvira,” “Bobbie Sue,” “Thank God For Kids,” “American Made,” and “Y’All Come Back Saloon,” among dozens more. For more information and to view upcoming tour dates for The Oak Ridge Boys, please visit oakridgeboys.com.

About Gaither Music Group:
One of the largest independent Christian music companies in the world and a household name for millions of fans, Gaither Music Group, in partnership with Primary Wave Publishing, is known worldwide for its award-winning and top-selling recordings, including the Gaither Gospel Series, of which 133 products have been certified gold, platinum or multi-platinum. These recordings, which encompass more than 177 video copyrights, showcase gospel music pioneers; many of the finest performers in the gospel genre; up-and-coming acts; and country artists including The Oak Ridge Boys, Jimmy Fortune, Joey+Rory, Alabama, Alan Jackson, The Statler Brothers, George Jones, Vince Gill, and others. The brand has partnered with Sandi Patty, Gloria Gaynor, Steven Curtis Chapman, and a host of acclaimed talents from various fields of music. Gaither Music Group has garnered sales of more than 40 million DVDs and CDs, including such PBS stalwarts as Billy Graham: God’s Ambassador, the only authorized video autobiography of Reverend Billy Graham; The Gospel Music of Johnny Cash; and three Elvis Presley projects, in conjunction with the Elvis Presley Estate. The company developed a strategic partnership with Cracker Barrel Old Country Store® in 2008; and its alliances with Capitol Christian Music Group, Virgin Music Label & Artist Services, Universal Music Group, and Time Life Music remain bedrocks for the company.