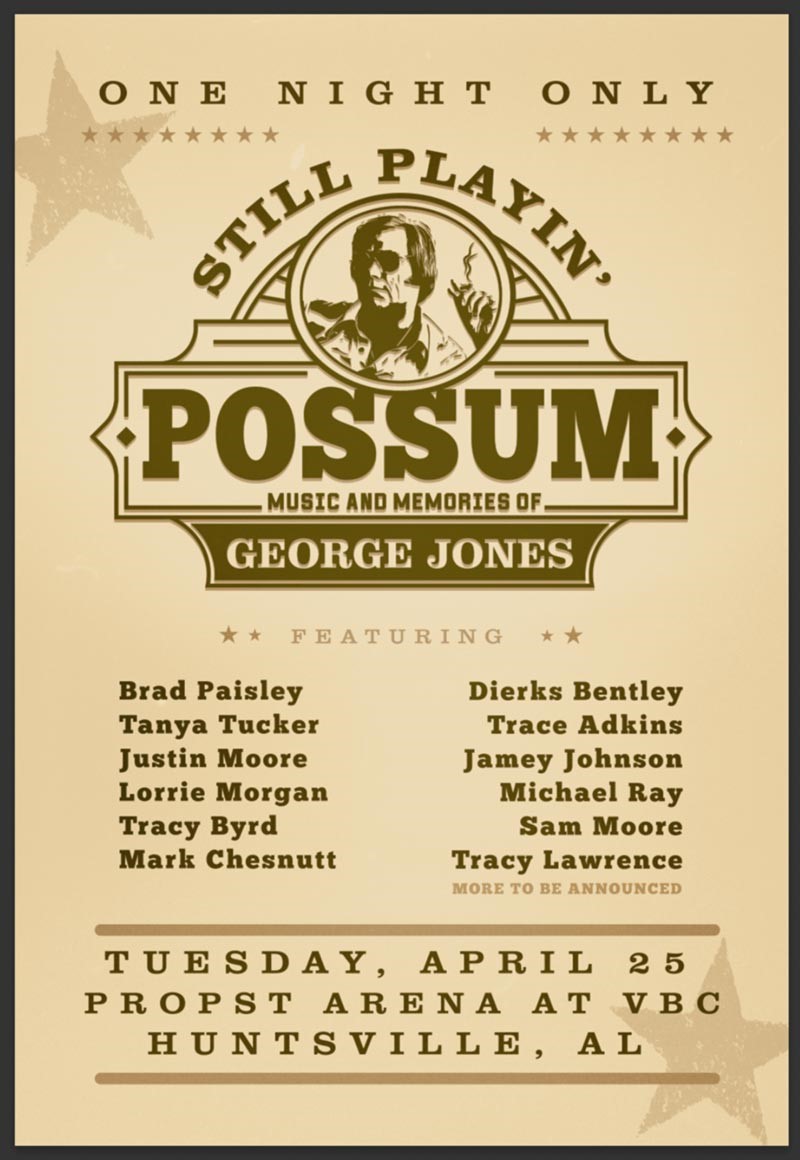 Today, Nancy Jones – the widow of George Jones – announced the one-night-only concert event “Still Playing Possum: Music and Memories of George Jones,” to honor the legacy and music of “the greatest country singer of all time”. The special television taping event will take place on Tuesday, April 25, 2023, at the Von Braun Center in Huntsville, Alabama. Brad Paisley, Dierks Bentley, Jamey Johnson, Justin Moore, Lorrie Morgan, Mark Chesnutt, Michael Ray, Sam Moore, Tanya Tucker, Trace Adkins, Tracy Byrd and Tracy Lawrence are amongst the first artists to be announced as performers with more artists to be announced. Ticket prices will start at $25.00 and a special VIP upgrade, which includes dinner the night before with Nancy Jones and friends, for $200.

“George Jones died on April 26, 2013, in Nashville, Tennessee. It will be ten years since he left us with just his songs, so to produce this night of music to honor his legacy is perfectly fitting,” says Nancy Jones. “George made history and influenced artists from all genres and many of them will celebrate with us in April. The night will bring lots of emotion for the fans, our family, and anyone who just loved Country Music.”

Jones is regarded among the most important and influential singers in American popular music history. He was the singer of enduring country music hits including “She Thinks I Still Care,” “The Grand Tour,” “Walk Through This World With Me,” “Tender Years” and “He Stopped Loving Her Today,” the latter of which is often at the top of industry lists of the greatest country music singles of all time. Born in Saratoga, Texas, Jones played on the streets of Beaumont for tips as a teenager. He served in the U.S. Marine Corps before returning to Texas and recording for the Starday label in Houston, Texas. In 1955, his “Why Baby Why” became his first Top 10 country single, peaking at number four and beginning a remarkable commercial string: Jones would ultimately record more than 160 charting singles, more than any other artist in any format in the history of popular music. His first number-one hit came in 1959 with “White Lightning,” a Mercury Records single that topped Billboard country charts for five weeks. He moved on to United Artists and then to Musicor, notching hits including “She Thinks I Still Care,” “The Race Is On,” “A Good Year for the Roses” and “Walk Through This World With Me.”

Jones signed with Epic Records in 1971 and worked with producer Billy Sherrill to craft a sound at once elegant and rooted, scoring with “The Grand Tour,” “Bartenders Blues” and many more. Sherrill also produced duets between Jones and his then-wife Tammy Wynette, and in the 1970s they scored top-charting hits including “We’re Gonna Hold On,” “Golden Ring” and “Near You.” By the time “Golden Ring” and “Near You” hit in 1976, Jones and Wynette were divorced, and Jones was battling personal demons. His solo career cooled until 1980, when he recorded “He Stopped Loving Her Today,” a ballad penned by Curly Putman and Bobby Braddock that helped Jones win Country Music Association prizes for best male vocal and top single. “He Stopped Loving Her Today” revived a flagging career, and Jones won the CMA’s top male vocalist award in 1980 and 1981. He also earned a Grammy for best male country vocal performance. He signed with MCA Records in 1990 and began a successful run, and he was inducted into the Country Music Hall of Fame in 1992. His guest vocal on Patty Loveless’ “You Don’t Seem To Miss Me” won a CMA award for top vocal event in 1998, and it became his final Top 20 country hit.