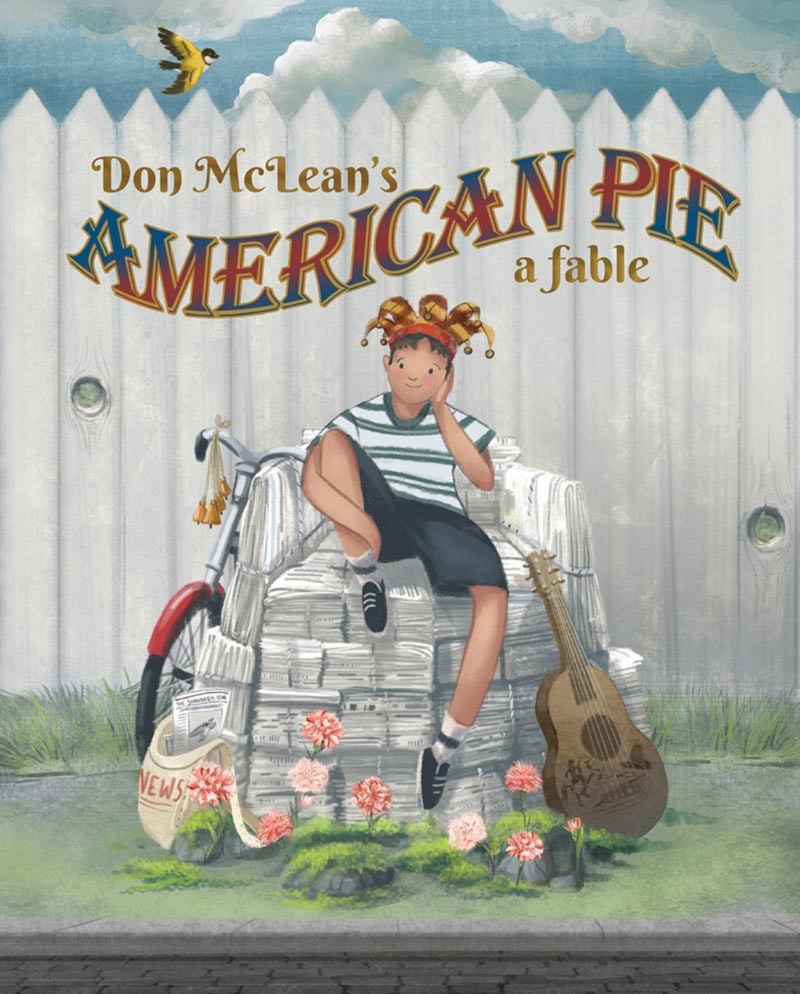 Commemorating the fiftieth anniversary of one of the top songs of the twentieth century, ‘Don McLean’s American Pie: A Fable’ weaves themes from the iconic song with experiences from McLean’s early life and, like the musical hit that inspired it, offers meaningful elements open to interpretation in a lushly illustrated tale.

“As ‘American Pie’ celebrates 50 years, I’m very happy to have a children’s book based on the premise of the song,” McLean said. “Everyone has a different interpretation of it. Releasing this fable brings another perspective to the lyrics, along with some backstory for when I wrote it. I hope every child gets to imagine in their own mind what ‘American Pie’ means to them and know that dreams can become reality.”

“Don McLean’s American Pie: A Fable” is the story of a newspaper delivery boy in the late 1950s who discovers the joy of friendship and music, eventually learning that when you recognize what makes you happy, you are never truly alone.

The June 7 book release also serves as the launch of IPG Publishing and of a partnership between the Chicago-based publisher and Los Angeles-based media company Meteor 17.

“I’m especially proud that this timely fable is the first release in our partnership with IPG Publishing,” Proffer said. “It echoes the spirit and sentiment of Don’s ‘American Pie’ and will leave the reader contemplating and feeling, just like the song that inspired it. After fifty years, the song maintains its relevance and the book will introduce its magic to a new generation.”

Released in 1971, “American Pie” was named one of the top five songs of the century by the National Endowment for the Arts and the Recording Industry Association of America, and the original recording was selected for preservation in the National Recording Registry by the Library of Congress as being “culturally, historically or artistically significant.” The song is also the subject of an upcoming documentary.

“At its heart, Don McLean’s iconic song was about real events that impacted a generation, and our book is similar in spirit,” said Richard T. Williams, Vice President, Business Development, Publishing & Licensing for IPG. “It doesn’t tell the literal story of The Day the Music Died, but it hints at how a young boy may have found inspiration from it, resulting in a lifetime of music and artistry—just as Don may have.”

He added that by pairing an emotionally resonant story with elaborate and whimsical illustrations, the publishing team hoped to inspire children to find their inner creative voices.

ABOUT DON McLEAN:
Don McLean is a Grammy award honoree, a Songwriter Hall of Fame member, a BBC Lifetime Achievement Award recipient, and his smash hit “American Pie” resides in the Library of Congress National Recording Registry and was named by the Recording Industry of America (RIAA) a top 5 song of the 20th Century. A New York native, Don McLean is one of the most revered and respected songwriters in American history. (www.donmclean.com)

ABOUT INDEPENDENT PUBLISHERS GROUP:
Founded in 1971, IPG was the first organization specifically created for the purpose of marketing titles from independent presses to the book trade. Today, IPG’s wide reach into the book market includes distribution of both print and e-books from a wide array of publishers, digital printing, and traditional publishing. With consistent growth year over year, IPG’s success has come from supporting and encouraging the growth of its publishing partners in the United States and worldwide. IPG was acquired by Chicago Review Press in 1987, and this acquisition formed the parent company Chicago Review Press, Inc., which now owns Chicago-based indie publishers Chicago Review Press and Triumph Books. (www.ipgbook.com)

ABOUT SPENCER PROFFER & METEOR 17:
Spencer Proffer is a highly regarded and innovative music, media producer, and strategist with a long history of connecting with audiences. His productions and those he has been integrally involved with have garnered Academy, Golden Globe, Emmy, Grammy, and Tony awards and nominations. METEOR 17 is a full-service media organization that actively conceives and participates through all phases of deal-making, production, marketing, and distribution. (www.meteor17.com)