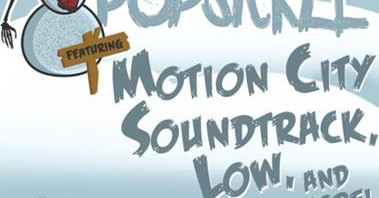 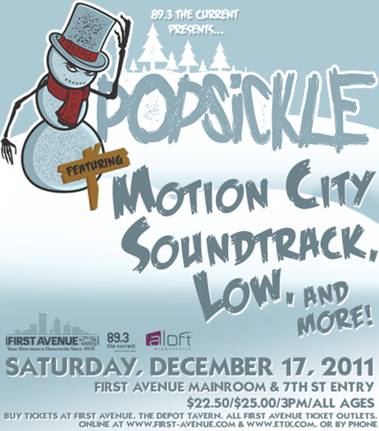 Motion City Soundtrack and 89.3 The Current are proud to announce the second annual POPSICKLE Festival on Saturday, December 17th at Minneapolis’ First Avenue.  The festival will take over both the main room as well as the 7th St. Entry.  Motion City Soundtrack will be joined by Low, who released their new album C’mon on Sub-Pop earlier this year.  The second incarnation of will also feature Jenny Owen Youngs and several up-and-comers including The 4onthefloor, The Red Pens, Two Harbors, Koo Koo Kanga Roo, and My Lady Four with more bands to be announced soon.

Tickets for Popsickle Festival are on sale now at First Avenue, The Depot Tavern, all First Avenue Ticket Outlets and online at www.first-avenue.com  and www.etix.com . Tickets are $22.50 in advance, $25.00 at the door and $1 per ticket will be donated to charity – more info on which will be participating to come soon!