THE DAY THE MUSIC DIED: THE STORY OF DON McLEAN’S ‘AMERICAN PIE'” AVAILABLE NOW ON PARAMOUNT+ 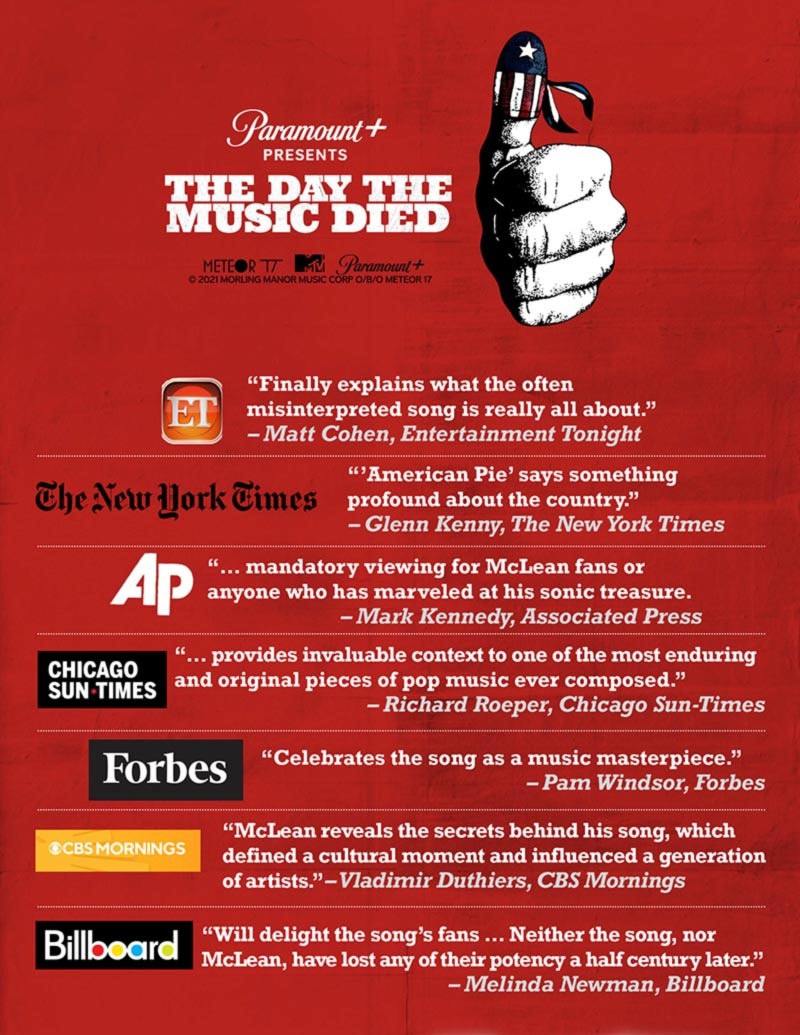 THE DAY THE MUSIC DIED: THE STORY OF DON McLEAN’S “AMERICAN PIE” launched Tuesday, July 19 on Paramount+, both in the U.S. and internationally where the service is available.

With a narrative running deeper than a catchy tune and cryptic verses, “American Pie” is a musical phenomenon woven deep into the history of American culture, entertaining audiences around the world for over 50 years. In THE DAY THE MUSIC DIED: THE STORY OF DON McLEAN’S “AMERICAN PIE,” McLean powerfully reveals and shares the secrets behind his iconic song. In addition, the documentary highlights cultural moments in America’s history that are as relevant now as they were in 1971 when the song was released. The film tells stories of the people who were a part of this moment from the beginning and shows the point of view of a new generation of artists who are motivated by the same values and ideas that inspired the song’s creation.

“This documentary is something that will make people think, especially since so many throughout the years have asked me what certain lyrics meant or whom I was referring to, but now I finally can solve many of those mysteries,” says McLean. “Everyone from Madonna to Garth Brooks to Weird Al Yankovic has recorded ‘American Pie’ and made it their own. So many people have their own interpretation of the song, and I love it.”

“Not only is “American Pie” one of the most universally known songs of all time, it also represents a significant piece of musical history and a pivotal moment in American culture. It’s a story that needs to be told and we’re excited to have THE DAY THE MUSIC DIED take fans deeper into its making, finally put to rest the speculation behind its lyrics, and hear from today’s biggest artists – both legends and future stars – who it has personally influenced,” said Bruce Gillmer, President of Music, Music Talent, Programming and Events, Paramount, and Chief Content Officer, Music, Paramount+. “A global sensation deserves a global launch and we’re thrilled to add this film to Paramount+’s unmatched portfolio of premiere music content.”

To help bring the documentary to life, McLean enlisted music producer and songwriter Spencer Proffer, CEO of media production company Meteor 17. In a collaborative vision, Proffer and McLean tell the story of this special and unique song by using contemporary audio/visual storytelling techniques to artistically reimagine the music for a modern audience.

“There are interchanges with all stripes of people from many walks of life, including major celebrities, music icons, current breaking artists, and industry leaders,” said Proffer. “The film explores what ‘American Pie’ meant to people then, what it means to them now, and what it will mean to generations in the future.”

THE DAY THE MUSIC DIED: THE STORY OF DON MCLEAN’S “AMERICAN PIE” is produced by Spencer Proffer and executive produced by Bruce Gillmer. 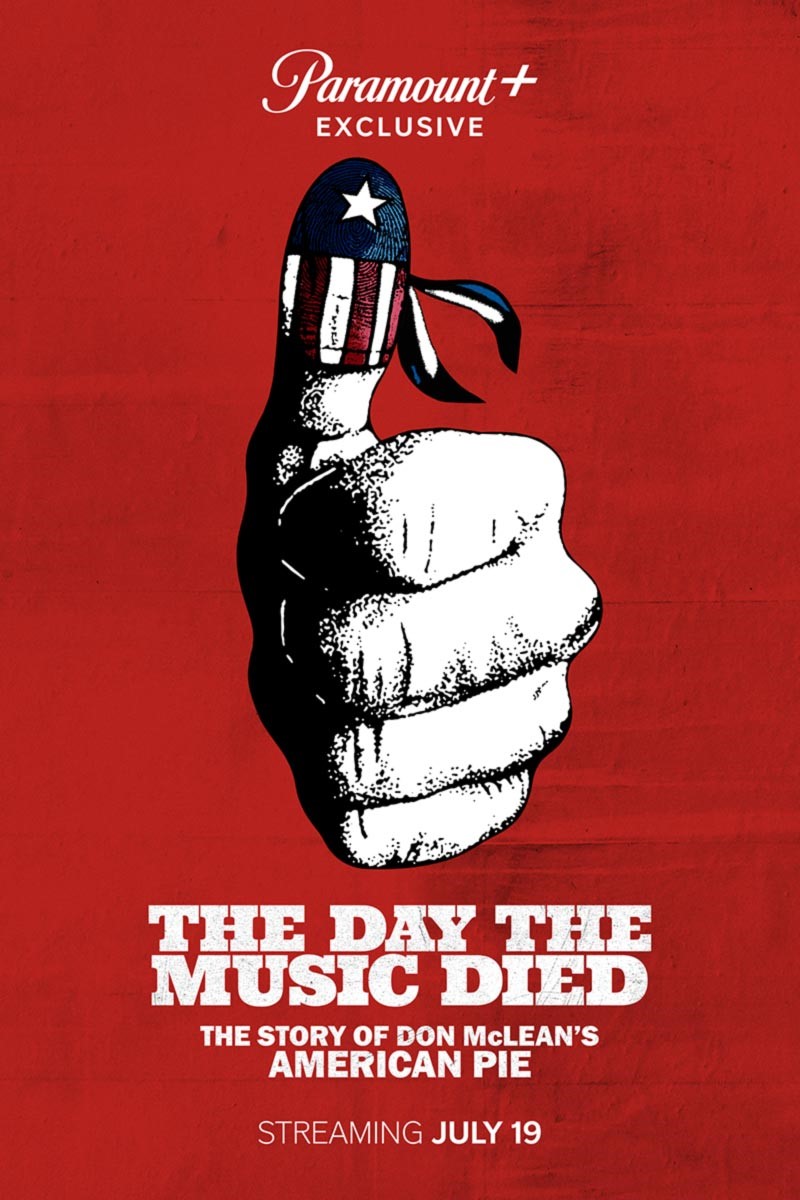 About Paramount+
Paramount+ combines live sports, breaking news, and a mountain of entertainment. The premium streaming service features an expansive library of original series, hit shows, and popular movies across every genre from world-renowned brands and production studios, including BET, CBS, Comedy Central, MTV, Nickelodeon, Paramount Pictures, and the Smithsonian Channel. The service is also the streaming home to unmatched sports programming, including every CBS Sports event, from golf to football to basketball and more, plus exclusive streaming rights for major sports properties, including some of the world’s biggest and most popular soccer leagues. Paramount+ also enables subscribers to stream local CBS stations live across the U.S. in addition to the ability to stream other live channels: CBSN for 24/7 news, CBS Sports HQ for sports news and analysis, and ET Live for entertainment coverage.

About Don McLean
Don McLean is a Grammy award honoree, a Songwriter Hall of Fame member, and a BBC Lifetime Achievement Award recipient, his smash hit “American Pie” resides in the Library of Congress National Recording Registry and was named a top 5 song of the 20th Century by the Recording Industry of America (RIAA). A New York native, Don McLean is one of the most revered and respected songwriters in American history. After paying his dues in the New York club scene in the late ‘60s, he went on to score mega-hits like “Vincent (Starry, Starry Night),” “Castles in the Air” and many more. His catalog of songs has been recorded by Madonna, Garth Brooks, Josh Groban, Drake, “Weird Al” Yankovic and countless others. In 2015, McLean’s handwritten manuscript of the lyrics to “American Pie” was auctioned by Christies, selling for just over $1.2 Million. 2019 honored Don with a star on the Las Vegas Walkway of Stars and his song “And I Love You So” was the theme for Prince Harry and Megan Markle’s wedding. Don landed a new recording contract with Time Life in 2020, with whom he released a catalog of recordings as well as a new album Still Playin’ Favorites. 2021 brought Don’s “American Pie” features in the Avengers’ Black Widow and the new Tom Hanks movie Finch. Don received a star on the Hollywood Walk of Fame, celebrated the 50th anniversary of “American Pie,” recorded a version of the song with a cappella group Home Free, a children’s book has been written, and much more! And when you think things are slowing down, not so for Don McLean!

About Meteor 17 (M17)
Headquartered in Los Angeles, this convergence and production venture is helmed by innovative media and music producer, Spencer Proffer. M17 is producing and is developing an ambitious slate of projects across music, TV, film, internet, live event, and other platforms, integrating brand marketing and music as organic components. M17 is a full-service organization that actively participates from conception and architecture through all phases of deal-making, production, marketing, and distribution entities highlighted on www.meteor17.com.