Live From Ford Center at The Star in Frisco, Texas on May 11 Streaming Exclusively on Prime Video 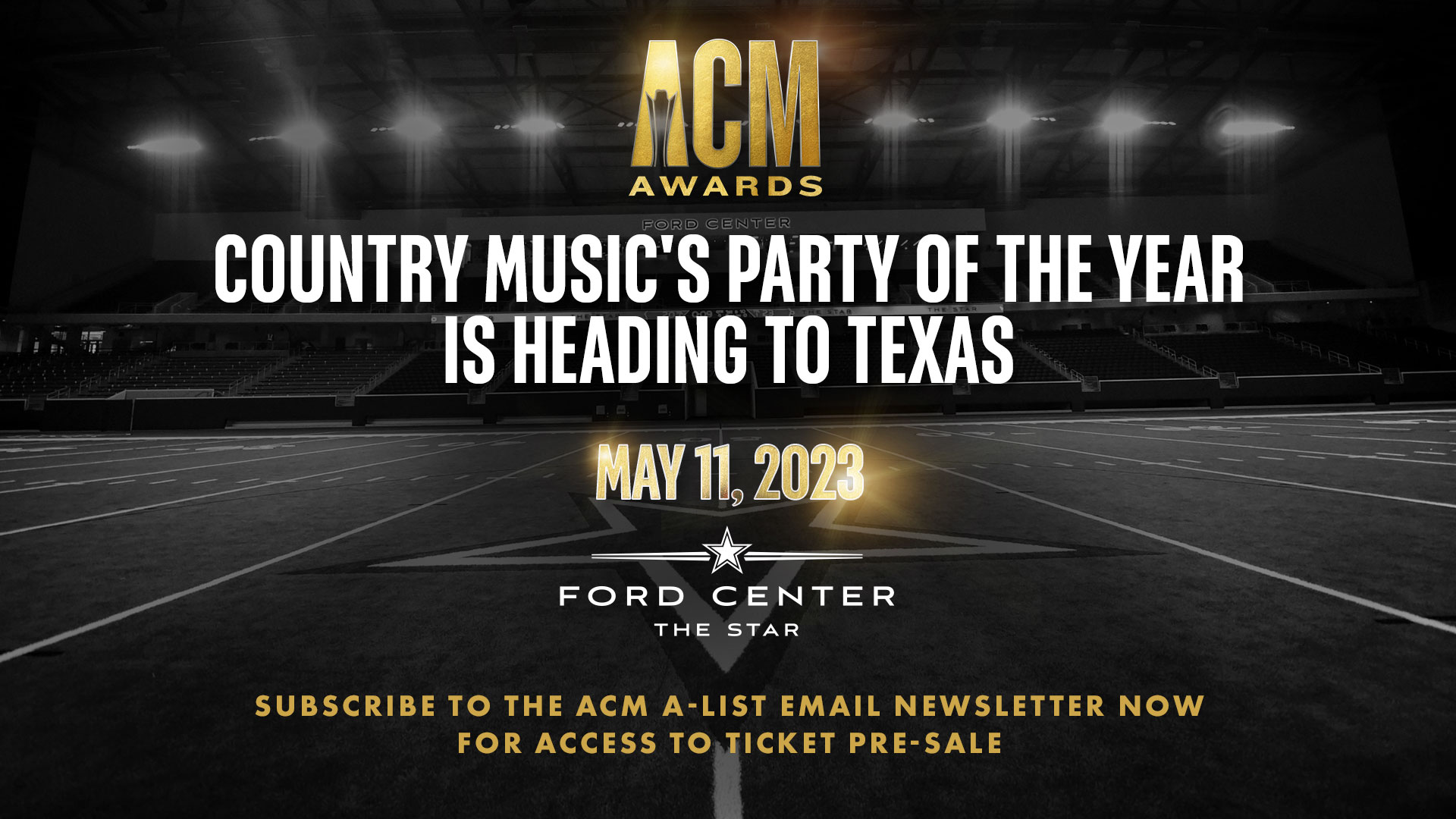 The 58th Academy of Country Music Awards will take place Thursday, May 11, 2023, at Ford Center at The Star in Frisco, Texas and will stream live on Prime Video globally and exclusively. Additional details, including award submissions timeline, hosts and performers, and additional ACM events surrounding the Awards will be announced in the coming weeks and months.

“We couldn’t be more excited to welcome the Academy of Country Music Awards back to North Texas,” said Dallas Cowboys Owner, President and General Manager Jerry Jones. “The last time we hosted the ACMs in 2015 at AT&T Stadium we saw the incredible energy that comes from such great fans of country music in our region. We built The Star in Frisco to attract big events here like the ACMs, and I know our partners locally and our friends in country music will provide incredible entertainment come May of 2023.”

“When the opportunity to bring the ACM Awards back to Texas was presented, we saw a chance to take the show to a new level for fans with an exciting new venue,” said Academy of Country Music CEO Damon Whiteside. “Texas is home to some of the most passionate Country Music fans and this is their exclusive opportunity to be in the room for all the stars and excitement that the ACM Awards are known for. We plan to throw an unforgettable party and show the world how we Country Texas-style!”

ACM A-LIST TICKET PRE-SALE: Tickets are currently on sale for ACM A-List subscribers. To gain access to pre-sale tickets before they go on sale to the general public, sign up for A-List by 5 p.m. CT on Monday November 14th and you’ll be sent a pre-sale code that will grant you access to purchase tickets.

The 58th Academy of Country Music Awards will mark a return to Texas for the first time since the landmark 50th ACM Awards, which took place at AT&T Stadium in Arlington in 2015. Ford Center at The Star in Frisco opened in 2016 and serves as the state-of-the-art practice facility for the Dallas Cowboys, as well as the home for many major sporting events throughout the year. The 58th ACM Awards will be the first awards show to take place at Ford Center.

About the Academy of Country Music:

Founded in Southern California in 1964 as a regional trade organization, the ACADEMY OF COUNTRY MUSIC (ACM) has grown in the almost-60 years since into a leading association for the Country Music industry. Today, the Academy boasts more than 4,600 professional members nationwide and serves as a powerhouse advocate for Country fans, artists, and all facets of the business, as well as a supporter of philanthropic work through charitable arm ACM LIFTING LIVES, which harnesses the power of the Country Music community to help improve lives through the power of music and provide aid in times of need, with a focus on health initiatives. 2022 continues to be a landmark year for the Academy, with the relocation of the organization’s headquarters to Nashville after decades in Los Angeles; ACM Honors, dubbed the “Country Music industry’s favorite night,” returning to broadcast TV and airing for the first time on FOX; and, in a historic partnership with Amazon, its iconic Academy of Country Music Awards streamed live on Prime Video in 235 territories all over the globe, the first time a major awards show has streamed exclusively. For more information, log onto ACMcountry.com or ACMLiftingLives.org.

Prime Video offers customers a vast collection of movies, series, and sports—all available to watch on hundreds of compatible devices.

Prime Video is just one of many shopping, savings, and entertainment benefits included with a Prime membership, along with fast, free shipping on millions of Prime-eligible items at Amazon.com, ultrafast grocery delivery and pickup, unlimited photo storage, exclusive deals and discounts, prescription savings, and access to ad-free music, books, and games. To sign up or start a 30-day free trial of Prime, visit: amazon.com/prime.

The Star is the 91-acre campus of the Dallas Cowboys World Headquarters and training facility in Frisco, Texas. Developed as a first-of-its-kind partnership between the City of Frisco, Frisco ISD and the Dallas Cowboys, The Star features Ford Center, a 12,000-seat stadium that hosts Frisco ISD football games, concerts and other events; Cowboys Fit, a 60,000 square-foot gym developed in partnership with leading fitness developer, Mark Mastrov; Cowboys Club, a members-only club where the country club meets the NFL; the Omni Frisco Hotel, a 16-floor, 300-room luxury hotel; Baylor Scott & White Sports Therapy & Research at The Star, a 300,000 square-foot center of excellence for sports medicine; Twelve Cowboys Way, a 17-story, luxury residential tower in partnership between Pro Football Hall-of-Fame Quarterback #12 Roger Staubach, and Dallas-based developer and former Dallas Cowboys center, Robert Shaw; Formation, a dynamic coworking experience offering a collaborative work environment of open workspace, dedicated desks and private offices; as well as a variety of shopping, dining and nightlife options throughout The Star District. For more information on The Star, visit www.TheStarInFrisco.com.

The Academy of Country Music