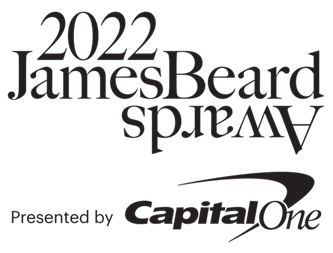 Reichenbach made opening remarks and highlighted this year’s theme, “Gather for Good,” building on the Foundation’s mantra of Good Food for Good®. Winners were announced in real-time on the James Beard Foundation Twitter feed (@beardfoundation).

“The Awards are a great reminder that we are among innovators, entrepreneurs, and trailblazers who represent a wide range of regions, cultures, and cooking philosophies,” said Tanya Holland, chair of the James Beard Awards Committee. “And this year, in particular, is a great reminder of how incredibly diverse our industry is. I am proud of the changes the James Beard Foundation has made to the Awards program to ensure equity and inclusion, and though it is just the beginning of an ongoing commitment, we are already seeing the impact. This is the most diverse list I’ve seen in Awards history, and I am honored to be a part of that change.”

The James Beard Awards, considered to be among the nation’s most prestigious honors, recognize exceptional talent in the culinary and food media industries, as well as a demonstrated commitment to racial and gender equity, community, sustainability, and a culture where all can thrive.

The Lifetime Achievement Award is given to an individual whose lifetime body of work has had a positive and long-lasting impact on the way we eat, cook, and/or think about food in America. This year’s winner is TV cooking show host, cookbook author, and master chef Martin Yan. Yan started cooking on television in 1978, developing his signature show, Yan Can Cook, which has been broadcast to more than 50 countries. Throughout his prolific career, including 3,500 episodes and 30 cookbooks, Yan has brought the joy of Chinese cooking to America and the world with his motto, “If Yan Can Cook, So Can You!”

“For four decades, the Yan Can Cook show has allowed me to journey to incredible places and meet with unforgettable people all around the world. My heart is more than full in accepting this special award from the James Beard Foundation,” said Yan. “This is the apex of our profession, and for me, it validates my entire career. This is the absolute experience of my lifetime. Thank you.”

Humanitarian of the Year Award

The Humanitarian of the Year Award is given to an individual or organization working in the food realm who has given selflessly and worked tirelessly to better the lives of others and society at large. This year’s winner is James Beard Award-winning cookbook author, culinary historian, and filmmaker Grace Young for her work to save America’s Chinatowns amid Asian American and Pacific Islander (AAPI) hate during the COVID-19 pandemic. Through her various campaigns, including #savechineserestaurants and #loveAAPI, among others, Young has helped to raise $40,000 in support of Chinatowns across the country.

“I’m overwhelmed to be singled out for such a great honor. For me, being a voice for the AAPI community has been a privilege and has immeasurably enriched my life,” says Young.

More information on the voting process for Lifetime Achievement and Humanitarian of the Year Awards can be viewed here.

The James Beard Foundation’s Leadership Awards spotlight the important and complex realms of sustainability, food justice, and public health. They raise awareness of these timely issues by celebrating the visionaries responsible for creating a healthier, safer, more equitable, and sustainable food system. An overview of the voting process can be viewed here.

Mavis-Jay Sanders is the director of culinary development and education at Drive Change, a nonprofit organization whose mission is to support formerly incarcerated young people through quality employment in the food and hospitality industry. Mavis-Jay—a James Beard Chef’s Bootcamp alumni and an advisory committee member of the James Beard House Fellows program—is a chef who believes in sustainably raised and thoughtfully prepared ingredients, as well as a racial equity advocate who has dedicated her career to fighting for food justice in Black and low-income communities.

The 2022 Restaurant and Chef Award Nominees are:

A restaurateur who uses their establishment(s) as a vehicle for building community, demonstrates creativity in entrepreneurship and integrity in restaurant operations, and is making efforts to create a sustainable work culture. Must have been in the restaurant business for at least five years, and must not have been nominated for a James Beard Foundation Chef Award in the past three years.

A chef who sets high culinary standards and has served as a positive example for other food professionals. Must have been working as a chef for three or more consecutive years.

A restaurant that demonstrates consistent excellence in food, atmosphere, hospitality, and operations, while contributing positively to its broader community. Must have been in business for five or more consecutive years, not including any time closed due to the pandemic.

A chef who displays exceptional talent, character, and leadership ability, and who is

likely to make a significant impact in years to come. No age limit is required.

A restaurant opened in 2020 or 2021 that already demonstrates excellence in cuisine and hospitality and seems likely to make a significant impact in years to come.

A baker of breads, pastries, or desserts who displays exceptional skill. Must consistently sell goods directly to the public but does not need a brick-and-mortar presence and must have been working as a pastry chef or baker for the past three years.

A restaurant that demonstrates consistent and excellent hospitality and service to its dining community, while also making efforts to provide a sustainable work culture. Must have been in operation for five or more years.

A restaurant or bar that demonstrates excellence in wine service through a carefully considered wine list and a well-informed approach to helping customers choose and drink wine. Makes efforts to create and foster a diverse portfolio of wines and wine team members.

A restaurant or bar that demonstrates exceptional care and skill in the selection, preparation, and serving of cocktails, spirits, and/or beer. Makes efforts to foster a diverse portfolio of brands and team members.

Best Chefs, Presented by Capital One (by region)

Chefs who set high standards in their culinary skills and leadership abilities, and who are making efforts to help create a sustainable work culture in their respective regions. May be from any kind of dining establishment, but must have been working as a chef in the region for at least three years.

Nominees for the James Beard Foundation Media Awards which, includes Book, Broadcast Media, and Journalism, will be announced on Wednesday, April 27 at an in-person event in New York City. This is the first time the Foundation is holding an event dedicated to the Media nominee announcement.

Tickets for the 31st annual James Beard Restaurant and Chef Awards in Chicago go on sale Monday, March 21 and can be purchased here. The Awards will be broadcast live via the James Beard Foundation’s Twitter feed.

The 2022 James Beard Awards will be the first in two years, after a hiatus during which the Awards underwent a full audit of its policies and procedures, continuing the work to remove bias, increase transparency and accessibility, and make the program more aligned with the Foundation’s mission and values. James Beard Awards policies and procedures can be viewed at jamesbeard.org/awards/policies.

For more information about the James Beard Foundation Awards, visit jamesbeard.org/awards. For up-to-the-minute news about the Awards follow @beardfoundation on Twitter and Instagram and keep an eye out for posts using #jbfa.

About the James Beard Awards

The James Beard Awards recognizes exceptional talent and achievement in the culinary arts, hospitality, media, and broader food system, as well as a demonstrated commitment to racial and gender equity, community, sustainability, and a culture where all can thrive. Established in 1990, the James Beard Awards are among the nation’s most prestigious honors recognizing leaders in the culinary and food media industries. The Awards are overseen by the Awards Committee. Each Awards program (Books, Broadcast Media, Journalism, Leadership, and Restaurant and Chef) has its own subcommittee members who volunteer their time to oversee the policies, procedures, and selection of judges for their respective program. All James Beard Award winners receive a certificate and a medallion engraved with the James Beard Foundation Awards insignia. For more information, subscribe to the Awards digital newsletter.

About the James Beard Foundation

The James Beard Foundation celebrates and supports the people behind America’s food culture, while pushing for new standards in the restaurant industry to create a future where all have the opportunity to thrive. Established over 30 years ago, the Foundation has highlighted the centrality of food culture in our daily lives and is committed to supporting a resilient and flourishing industry that honors its diverse communities. By amplifying new voices, celebrating those leading the way, and supporting those on the path to do so, the Foundation is working to create a more equitable and sustainable future—what we call Good Food for Good™. As a result of the COVID-19 pandemic, the James Beard Foundation launched the Open for Good campaign to ensure that independent restaurants not only survive, but that the industry is able to rebuild stronger than before. For more information, subscribe to the digital newsletter Beard Bites and follow @beardfoundation on Facebook, Twitter, Instagram, TikTok, LinkedIn, and Clubhouse. The James Beard Foundation is a national not-for-profit 501c(3) organization based in New York City.

At Capital One we’re on a mission for our customers – bringing them great products, rewards, service, and access to unique and unforgettable experiences they are passionate about. Capital One is a diversified bank that offers products and services to individuals, small businesses and commercial clients. We use technology, innovation, and interaction to provide consumers with products and services to meet their needs. Learn more at capitalone.com/access.