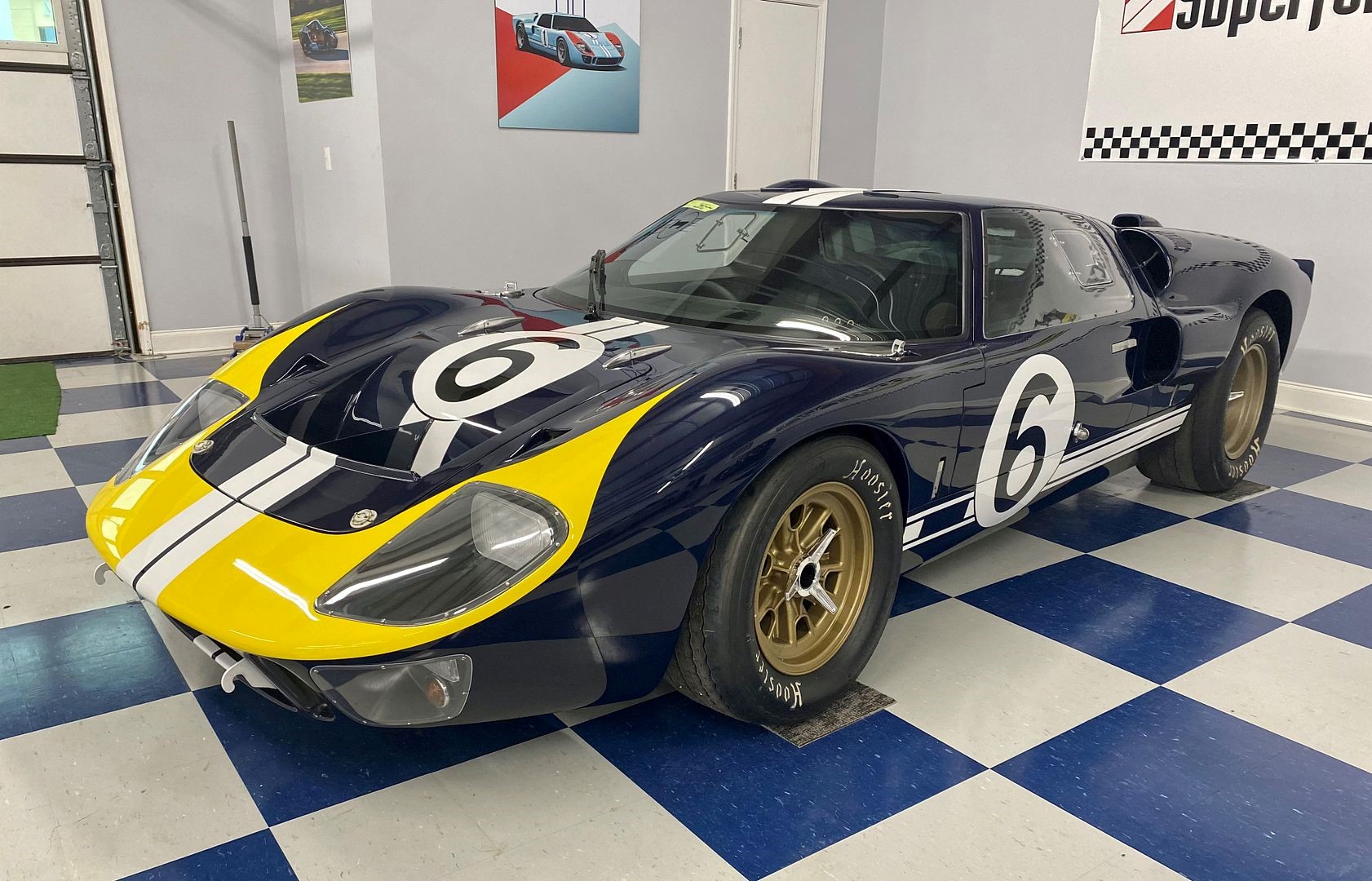 During the Las Vegas SEMA show today, Superformance unveiled the first MKII GT40 that was created to honor the car raced by Mario Andretti at Le Mans in 1966. The SEMA Show sports car, commissioned and finished by Downforce Motorsports, wears the blue and yellow livery and is part of the “Spirit of ’66” series. 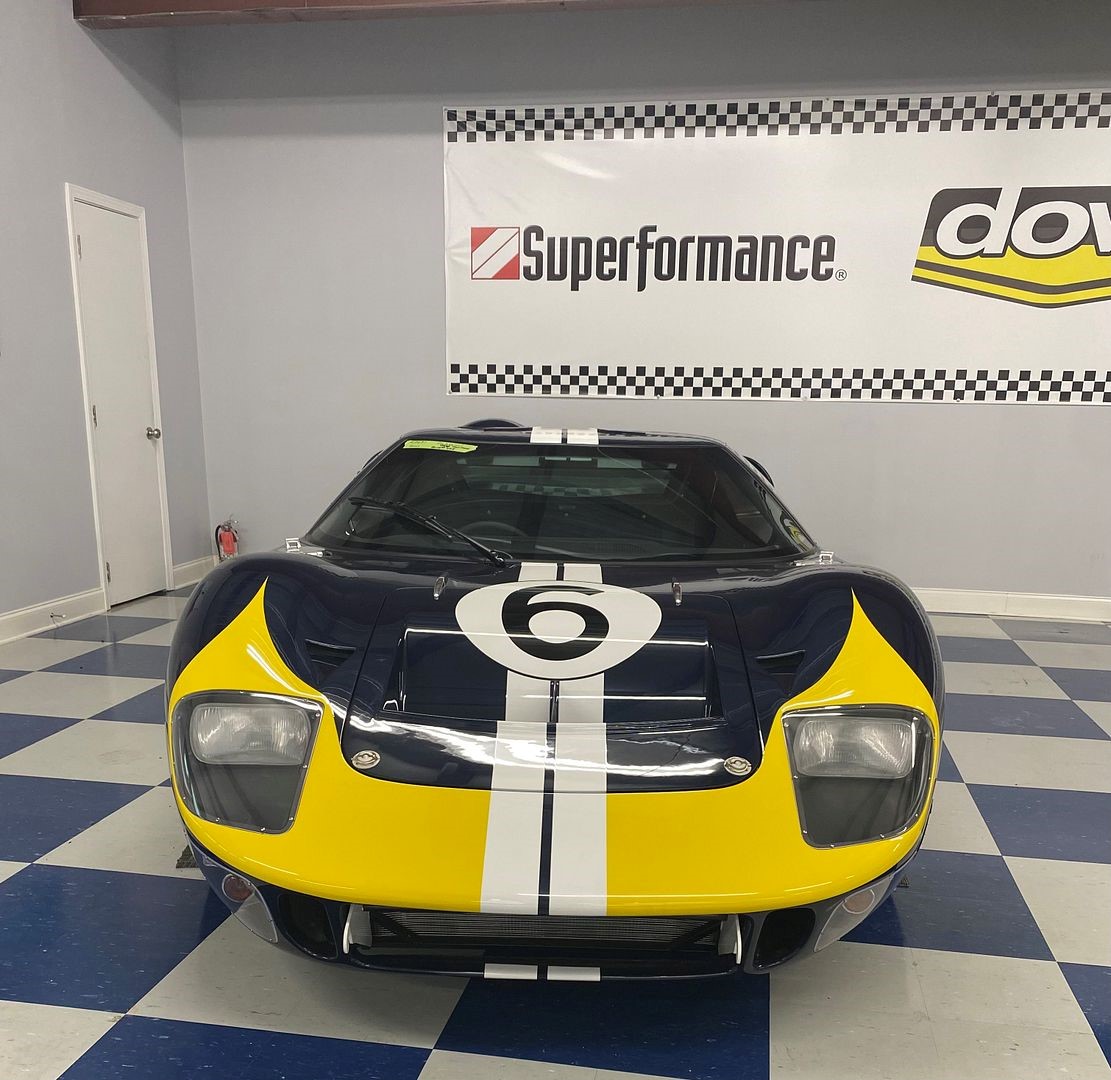 “We created a series of continuation cars that celebrate the grit and tenacity of all the GT40’s that competed in legendary races at Le Mans, Daytona and Sebring during the 1960s,” said Lance Stander, CEO of Superformance. “We offer a Ken Miles edition and another that wears the livery of the racecar driven that year by Chris Amon and Bruce McLaren for Shelby American in 1966. The night mist blue with yellow accents MKII we introduced today honors the Holman and Moody car driven by the dynamic Mario Andretti in France that year. We worked closely with Dan Long and his team at Downforce Motorsports on this initial car and it certainly lives up to the GT40’s spectacular legacy.” 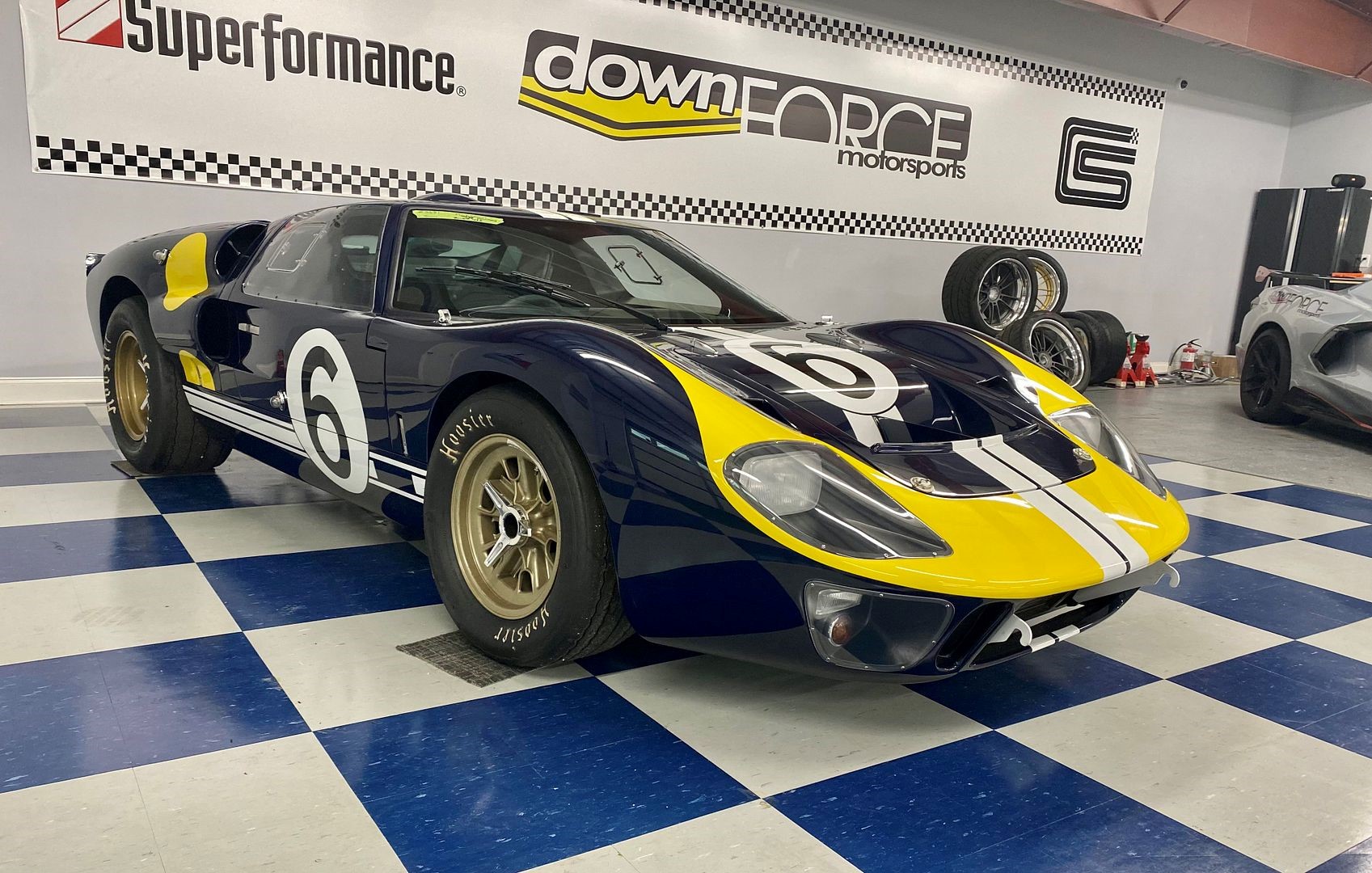 Mario Andretti made his first appearance at the 24 Hours of Le Mans in 1966, co-driving the #6 Ford GT40 Mark II. Engine problems ended his run that year, but he returned to Le Mans seven more times through 2000. Andretti went on to win the Indianapolis 500 in 1969 and the Formula One Drivers’ Championship in 1978.

“While the livery of this car honors the tremendous legacy of a GT40 raced five decades ago, our ‘Spirit of ‘66’ prototype was also our dealership’s rolling testbed for some of the best V8 technology in the world today,” said Dan Long, CEO of Downforce Motorsports. “One of the most exciting aspects of the continuation Superformance GT40 is the flexibility to customize and modernize the car. Our SEMA 2022 car features a new 5.2L V8 built exclusively for us. This amazing engine totally transforms the car, allowing the driver to truly accelerate their life.”

RPG Racing Engines worked closely with Downforce Motorsports to develop the 5.2L DOHC Ford V8 package for integration into the MK GT40. The normally aspirated custom motor features a Ford Voodoo block, cross-plane crank and a multitude of racing components. The result is a reliable 650 horsepower modern engine that a customer can elect to have installed into their car.

“While Mario didn’t finish the race in 1966, it marked his first taste of Le Mans competition,” said Stander. “We are excited to commemorate that introduction to the world’s most famous endurance race for one of the world’s most sensational drivers.”

The continuation GT40 racecar was manufactured under the scrutiny of Safir GT40 Spares, Ltd., the undisputed legal holder of the GT40 trademark. It is a quality recreation of the original that beat Ferrari at Le Mans. While developing the exhilarating GT40 continuation, engineers went to great lengths to ensure authenticity. The car is so genuine that it can legally wear the name “GT40” and carries a GT40/P chassis number that is eligible for the official GT40 registry.

The Superformance GT40 boasts a pressed steel roof and beautifully finished body available in wide body (1968) and extra wide body (1969) configurations, as well as both right- and left-hand drive. The GT40 continuation is built to exacting standards; over two-thirds of the rolling chassis parts are interchangeable with that of an original car, including the “monocoque” style chassis.

The continuation GT40 is street legal and ready for the track. The car is sold with a roller without engine or transmission. The drivetrain’s selection, purchase and installation are the purchaser’s responsibility. Orders and now being accepted. For more information, visit www.superformance.com.

Superformance LLC has been a distributor of complete rolling chassis racecar replicas and continuation Shelby Cobras since 1994. Superformance products are aesthetically and dimensionally correct and are engineered in the image of some of the most iconic classic sports cars. All vehicles are built under license from trademark holders including Ford, Shelby, GM and SAFIR GT40, adding authenticity and value.

Superformance has a longstanding relationship with Hi-Tech Automotive, the world’s largest specialty care production facility. Together, they have produced and distributed more than 5,000 rolling chassis through 20 independent dealerships worldwide. The Superformance rolling chassis is completely assembled and ready for the buyer to install the drivetrain of their dreams.

Superformance has an owners’ forum and car registry. Additional information is available at www.superformance.com.