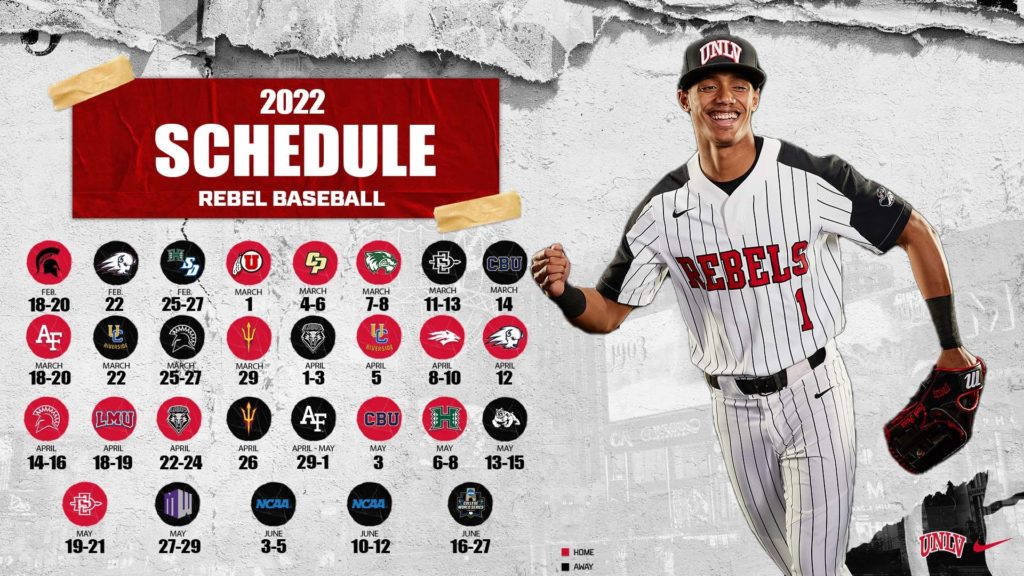 LAS VEGAS (UNLVRebels.com) – The UNLV baseball team will play a total of 56 regular-season games in 2022, with 30 of those against Mountain West competition and 26 versus 11 nonconference squads. In all, the Rebels will play 34 home contests in Las Vegas with 33 of those on campus at Earl E. Wilson Stadium and one more – a March 29 affair against Arizona State – at the Las Vegas Ballpark in Downtown Summerlin.

UNLV will kick off the 2022 season with a four-game series versus Michigan State (Feb. 18-20) before hitting the road for a single game at Dixie State (Feb. 22) and three at Fowler Park & Cunningham Field against San Diego and Hawaii (Feb. 25-27).

The Rebels head back home for the first MW home series against Air Force (March 18-20) before returning to the golden state for a single game contest at UC Riverside (March 22) and a series facing San Jose State (March 25-27). A makeup affair against the Sun Devils will be held at the Las Vegas Ballpark in Downtown Summerlin March 29 before hitting the road, again, for a series facing the New Mexico Lobos in Albuquerque (April 1-3).

The MW Championship will be hosted by San Diego State and take place at Tony Gwynn Stadium from May 27-29.