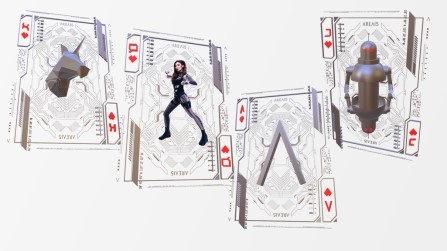 AREA15, the immersive art and entertainment district located minutes from the Las Vegas Strip, launches “On The Decks,” a one-of-a-kind digital NFT collection of stylized playing cards minted on the Polygon blockchain. Paying homage to table games throughout Las Vegas, the first drop in the NFT collection will feature a suit of hearts, including unique artworks, characters and AREA15 brand icons. To celebrate the launch of the first AREA15 digital collection, the entertainment district invites guests to an unforgettable NFT launch party on Saturday, April 23 featuring a live performance by world-renowned DJ Sama’ Abdulhadi.

AREA15’s commitment to creative expression across all physical and digital platforms led to this program, it will be the first of many NFT’s offered as both collectible art and as a digital utility redeemable inside the entertainment complex.

The “On The Decks” suit of hearts collection will also be available for purchase via digital auction on the Open Sea platform through April 22 leading up to the launch party. Auction winners of the first card drops not only will acquire ownership of the original digital NFT’s but also will receive exclusive passes to AREA15. The first drop for the suit of hearts will include:

Upon arriving at AREA15’s official NFT launch party, guests will witness the playing cards displayed digitally with projection-mapped technology inside The Portal, AREA15’s 360-degree 3D projection-mapped room. Attendees will also enjoy other mixed-reality experiences, digital giveaways, discounts redeemable inside AREA15 and a performance by internationally-recognized DJ Sama’ Abdulhadi. As one of the first DJs to emerge internationally from Palestine, Abdulhadi is renowned for her high-octane and punchy techno sounds featuring distinguished and defined musical arks.

Tickets to AREA15’s NFT launch party are available for $17.95 per person and can be purchased here. AREA15 NFT owners will also receive free admission to the celebration.

In addition, AREA15 invites fans of art, technology, music and entertainment to follow along throughout the summer as the entertainment complex launches other suits of cards in the deck, including diamonds, clubs and spades. With other releases of “On The Decks” suits of cards, AREA15 will host additional launch party celebrations.