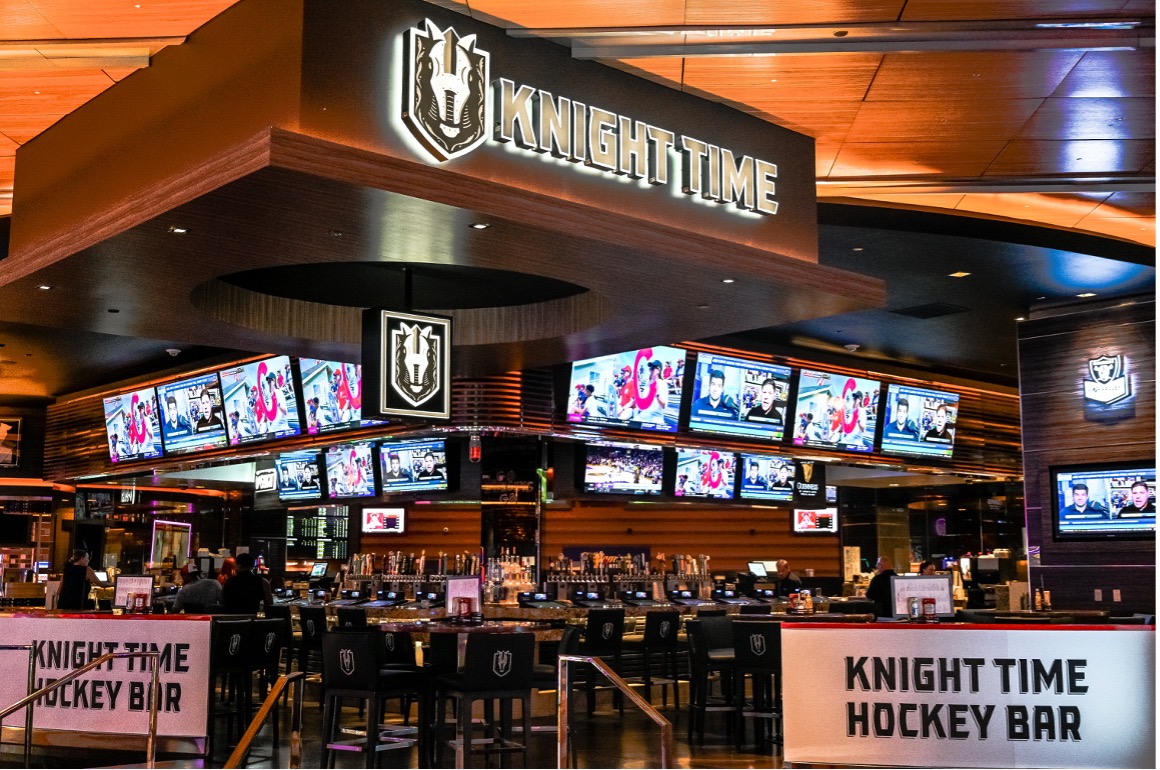 M Resort Spa Casino has announced the opening of a hockey lovers’ dream, Knight Time Hockey Bar, the best location to watch the Henderson Silver Knights games. The hockey bar honoring the local teams and celebrating M Resort’s partnership as the Official Team Headquarters Hotel for the Henderson Silver Knights will celebrate a grand opening on the evening of Oct. 5 with a star-studded hockey event for media, followed by the official grand opening to the public at 6 p.m.

“We’re incredibly excited to collaborate with M Resort to bring the Knight Time Hockey Bar to life,” said Henderson Silver Knights COO Chase Jolesch. “The team at M Resort did a fantastic job integrating the Silver Knights brand throughout the space, in addition to coming up with top-notch food and drink offerings. We know the community and our fans will enjoy it just as much as we do.”

“Our goal was to create an amazing sports bar experience for local hockey fans,” said Hussain Mahrous, Vice President and General Manager of M Resort Spa Casino. “Knight Time Hockey Bar is a hometown bar for our hometown team. A place where fans can come together, watch live games and enjoy an excellent selection of food and drinks.”

Knight Time Hockey Bar embraces the spirit of the game and its fans. Converting the former 32° Draft Bar space at M Resort, the new hockey bar features new TVs and a video wall.  Now fans can catch all the game’s nuances while watching televised Henderson Silver Knight games all season long. The bar also offers a new private area, The Penalty Box, and more intimate booths and seating with arcade games and a pool table. There are also eight alcoves in the back of the bar where guests can control their own TV.

To interact with other fans, guests can follow a live twitter feed on the video wall display while adding comments and cheering on the team. Bar patrons will feel like they’re at the rink when a goal horn goes off every time the Silver Knights or Golden Knights score! During those commercial breaks, play the 3D golf arcade game Golden Tee and rack up points!

Watching hockey goes better with over 99 beers on tap including a variety of key Canadian beer brands. Order some of the best made-to-order sandwiches, salads and pizza for those hunger pangs. Bigger appetites will be satisfied with barbecue ribs, burgers, or French dip sandwiches, with steak and eggs available all day. Go green with a chicken Caesar or Asian chicken salad or the excellent pho soup.

Guests will find the Henderson Silver Knights logo emblazoned on chairs, couches, and tables, as well as throughout the bar and casino. Located on the casino floor adjacent to the sports book, Knight Time Hockey Bar is easy to spot as the space is defined on the casino floor by a hockey-inspired wall wrap to simulate a hockey rink.. The fan favorite will be the all-new floor of the bar being installed which is comprised completely of hockey stick designs. Fans will also enjoy various hockey memorabilia that adorn the walls such as skates, signed hockey sticks, gloves and jerseys from the team.

Knight Time Hockey Bar is independently owned and operated by M Resort Spa Casino, an official partner of the Henderson Silver Knights and a member of the Silver Society, an exclusive group of founding partners for the Silver Knights, The Dollar Loan Center, and Lifeguard Arena. Knight Time Hockey Bar at M Resort Spa Casino will open to the public at 6 p.m. on Oct. 5. For more info, visit themresort.com.

ABOUT M RESORT SPA CASINO
M Resort Spa Casino, the Official Team Headquarters Hotel of the Henderson Silver Knights, is a Forbes Four-Star resort located on more than 90 acres on the southeast corner of St. Rose Parkway and Las Vegas Boulevard. Situated higher in elevation than other resort-casinos on the Las Vegas Strip, M Resort provides optimal views of the world-famous Las Vegas skyline from its guest rooms, suites, conference center and restaurants. The resort offers 390 guest rooms and suites, over 92,000 square feet of gaming, eleven restaurants and bars, the Forbes Four-Star Spa Mio, a state-of-the-art fitness center and a 100,000 square foot pool and events piazza. M Resort is operated by PENN Entertainment.

ABOUT THE HENDERSON SILVER KNIGHTS
The Henderson Silver Knights are the American Hockey League affiliate of the Vegas Golden Knights and is operated by Black Knight Sports and Entertainment LLC. For the latest news and information on the Silver Knights visit hendersonsilverknights.com. Fans can follow the team on Facebook, Twitter, Instagram and TikTok.