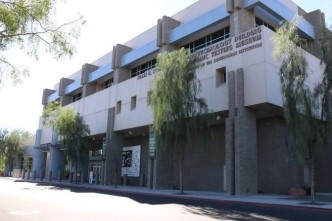 The National Atomic Testing Museum (NATM) announces its roster of public programs and promotions for July and August.

All museum events require registration. For more information on the museum’s programs and to register, visit www.nationalatomictestingmuseum.org/museum-events/.

Movie Night at the Museum: “Alamogordo, Center of the World, Trinity 1945”
Date: Thursday, July 14
Time: 6 to 7:30 p.m.
Location: Trinity Theater inside the National Atomic Testing Museum
Cost: Free. To RSVP, click here.
Description: Guests are invited to a special screening of the short documentary “Alamogordo, Center of the World, Trinity 1945” with film producer Larry Sheffield. The 30-minute film detailing the world’s first detonation of an atomic bomb received four different film festival awards since it premiered in 2020. Sheffield will introduce the film and will lead a Q & A session after the screening.
Speaker: Larry Sheffield is a filmmaker and historian whose grandfather worked on the Manhattan Project.

Sedan Crater 60th Anniversary Roundtable and Breakfast
Date: Saturday, July 30
Time: 10 to 11:30 a.m.
Location: National Atomic Testing Museum.
Cost: $10 for general admission, $5 for students with valid IDs and free for museum members. To RSVP, click here.
Description: On July 6, 1962, the U.S. conducted the Sedan nuclear weapons test at what is now known as the Nevada National Security Site to explore the technical and economic feasibility of using nuclear explosives for peaceful purposes in industrial applications. The test resulted in the formation of the Sedan Crater, one of the largest man-made craters on the planet. In 1994, the crater was listed on the National Register of Historic Places due to its tremendous size.

The museum invites the public to a roundtable discussion commemorating the 60th anniversary of this momentous test. During the event, three former Nevada Test Site employees and current trustees for the Nevada Test Site Historical Foundation will share their remembrances about Sedan and answer moderator-led questions. Attendees will then have the exclusive opportunity to enjoy breakfast with the speakers and ask their own questions at this casual meet and greet.
Speakers:

Distinguished Lecture with Steven Curtis: Clean Energy in Nevada Through Recycling Used Nuclear Fuel in Fast Reactors
Date: Saturday, August 6
Time: 1 to 3 p.m.
Location: National Atomic Testing Museum
Cost: Free. To RSVP, click here.
Description: Steven Curtis, who has been instrumental in speaking on behalf of Nevada acquiring used nuclear fuel to recycle in fast reactors, will be discussing the modern state of energy production and delivery in the U.S. and the implications of Nevada becoming a recycle center for used nuclear fuel.
Speaker: Steven Curtis was a technical team leader for the Nuclear Emergency Support Team and Consequence Management Technical Teams in Nevada for 13 years. He spent time at the University of Nevada, Las Vegas, and the Desert Research Institute as a part-time development officer for national security programs. He is a consultant for Readiness Resource Group in national security and was an active-duty Army officer and company commander in the Army National Guard.

Journey Through Japan
Date: Saturday, August 13
Time: 10:30 a.m. to 2:30 p.m.
Location: National Atomic Testing Museum
Cost: This event is free thanks to support by Findlay Henderson Honda.
Description: The museum will once again partner with the Office of the Honorary Consul General of Japan for Nevada and several local Japanese community organizations to host “Journey through Japan.” This event will be dedicated to learning and celebrating Japanese culture and history through hands-on activities and demonstrations, including kite making, Japanese language lessons, tea ceremonies and a sake tasting for guests 21 years or older. The event will also feature Taiko drummers, Japanese dance groups and Koto performances.

Community Outreach Events
With a strong commitment to the Las Vegas community, the museum regularly participates in community outreach events. Outreach not only includes educational lessons about the history of nuclear testing but also topics related to science, technology, engineering, mathematics and more. In July and August, NATM will attend the following outreach events:

Guided Tours
To preserve and foster public accessibility to the history associated with the Nevada Test Site and the nation’s nuclear weapons program, NATM regularly hosts field trips for the Clark County School District and other collegiate institutions. In July and August, NATM will host the following guided tours:

Historical Dates in July and August

ABOUT NATIONAL ATOMIC TESTING MUSEUM
The National Atomic Testing Museum (NATM) is operated and maintained by its parent company, the Nevada Test Site Historical Foundation (NTSHF), an IRS 501(c)3 charitable, non-profit organization chartered in Nevada. NATM is one of 37 museums designated as an Affiliate Partner of the Smithsonian Institution and is a repository for one of the most comprehensive collections of nuclear history in the world. Covering nuclear history beginning with the first test at the Nevada Test Site on January 27, 1951, NATM’s exhibitions and programming also address current affairs related to the nuclear industry.  For more information, go to www.nationalatomictestingmuseum.org and follow on Facebook, Instagram and Twitter.