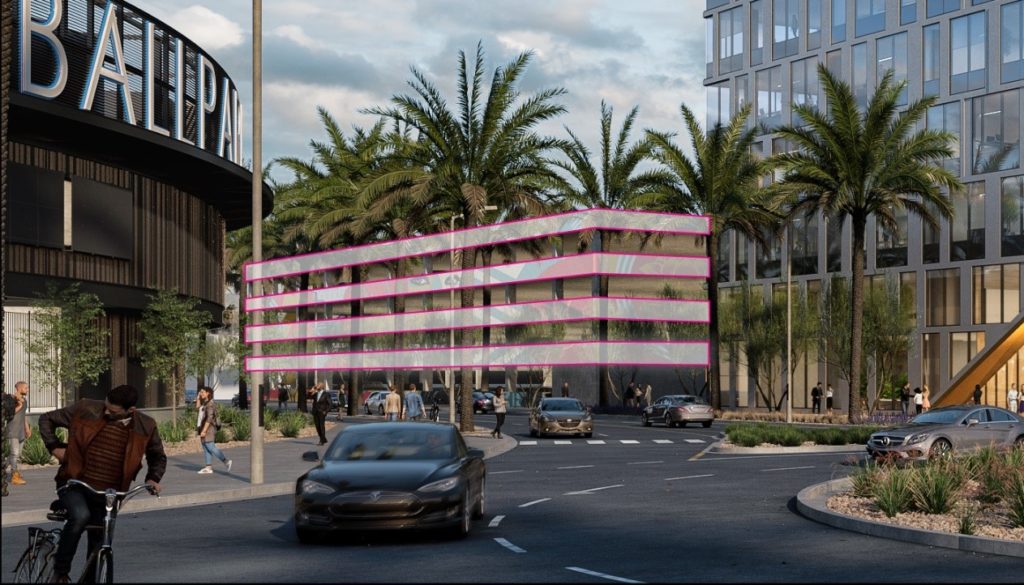 The Howard Hughes Corporation®, developer of the Summerlin® master planned community and its 400-acre urban center, Downtown Summerlin®, today announces it is seeking proposals from qualified artists to provide design services for exterior murals on the parking structure of 1700 Pavilion, a new ten-story Class-A office tower currently under development in Downtown Summerlin located at 1700 Pavilion Center Drive, adjacent Las Vegas Ballpark.  The RFP can be found here. Initial responses are due January 14, 2022.

The murals can be designed as two individual murals or as one continuous mural given that the panels wrap around the north and west facing sides of the 1700 Pavilion parking structure.  The north side faces Las Vegas Ballpark; the west side faces the office building.

Preference will be given to artists living and working in Southern Nevada although local residency is not a requirement.

Downtown Summerlin is developing as the dynamic and vibrant urban core of the Summerlin community.  It is not only a draw for Summerlin residents, but all Southern Nevadans thanks to its convenient location adjacent the 215 Beltway that provides easy access valley-wide. Its first phase, a 106-acre outdoor pedestrian retail center opened in 2014 and today, draws more than 20 million visitors annually.  Home to 125 local, regional and national brands, 30 restaurants, entertainment centers and two major sports venues:  City National Arena, practice facility of the NHL Vegas Golden Knights; and Las Vegas Ballpark, home of the Las Vegas Aviators, the city’s professional baseball team of the Triple-A West League and affiliate of the Oakland Athletics.

Artists interested in submitting proposals can find the RFP here.  For information about the RFP, contact Melissa Warren at melissa@twgpr.com or 702-528-6016.

About Summerlin®
Developed by The Howard Hughes Corporation®, Summerlin began to take shape in 1990 and has ranked in the country’s top 10 best-selling master planned communities for nearly two decades. Located along the western rim of the Las Vegas valley, Summerlin encompasses 22,500 acres with approximately 5,500 gross acres remaining to accommodate future growth, including infrastructure, open space and common areas, all within the master plan. The community is currently home to nearly 100,000 residents who enjoy an unparalleled list of amenities. These include more than 250 neighborhood and village parks, more than 150 completed miles of trails, 26 public and private schools, 14 houses of worship, ten golf courses, shopping centers, medical and cultural facilities, business parks and dozens of actively selling floor plans. Homes are available in a variety of styles—from single-family homes to townhomes—with offerings in a wide price range, including custom homesites in The Ridges. Summerlin is recognized as one of the country’s premier locations to raise a family and to operate a business, named Master Planned Community of the Year for 2020 by the National Home Builders Association.

About The Howard Hughes Corporation®
The Howard Hughes Corporation owns, manages, and develops commercial, residential, and mixed-use real estate throughout the U.S. Its award-winning assets include the country’s preeminent portfolio of master planned communities, as well as operating properties and development opportunities including: the Seaport in New York City; Downtown Columbia®, Maryland; The Woodlands®, The Woodlands Hills®, and Bridgeland® in the Greater Houston, Texas area; Summerlin®, Las Vegas; Ward Village® in Honolulu, Hawaiʻi; and Douglas Ranch in Phoenix. The Howard Hughes Corporation’s portfolio is strategically positioned to meet and accelerate development based on market demand, resulting in one of the strongest real estate platforms in the country. Dedicated to innovative placemaking, the company is recognized for its ongoing commitment to design excellence and to the cultural life of its communities. The Howard Hughes Corporation is traded on the New York Stock Exchange as HHC. For additional information, visit www.howardhughes.com.

Safe Harbor Statement
Statements made in this press release that are not historical facts, including statements accompanied by words such as “will,” “believe,” “expect,” “enables,” “realize,” “plan,” “intend,” “assume,” “transform” and other words of similar expression, are forward-looking statements within the meaning of the Private Securities Litigation Reform Act of 1995. These statements are based on management’s expectations, estimates, assumptions, and projections as of the date of this release and are not guarantees of future performance. Actual results may differ materially from those expressed or implied in these statements. Factors that could cause actual results to differ materially are set forth as risk factors in The Howard Hughes Corporation’s filings with the Securities and Exchange Commission, including its Quarterly and Annual Reports. The Howard Hughes Corporation cautions you not to place undue reliance on the forward-looking statements contained in this release. The Howard Hughes Corporation does not undertake any obligation to publicly update or revise any forward-looking statements to reflect future events, information or circumstances that arise after the date of this release.