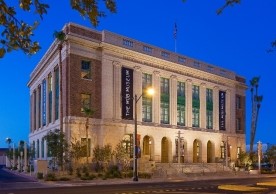 WHAT:
The Mob Museum, the National Museum of Organized Crime and Law Enforcement, announces FREE museum admission for Nevada residents and buy-one, get-one admission for non-residents to celebrate Kefauver Day, which commemorates the U.S. Senate investigative hearing into organized crime that took place in the Museum’s courtroom on Nov. 15, 1950.

Named after Senator Estes Kefauver of Tennessee, the Kefauver Committee hearings were televised nationwide and brought organized crime into the living rooms of many Americans for the first time. Held in 14 U.S. cities from 1950 to 1951, the Kefauver hearings were pivotal in the national fight against organized crime, as well as events that influenced the development of Las Vegas.

COST:
Free for Nevada residents with a valid I.D. Buy-one-get-one admission for non-residents.

In addition to free admission for Nevada residents, all guests will receive 10 percent off food and beverage inside The Underground speakeasy and at Museum concessions. Guests may obtain their free admission in person at the Museum box office on a first-come, first-served basis.