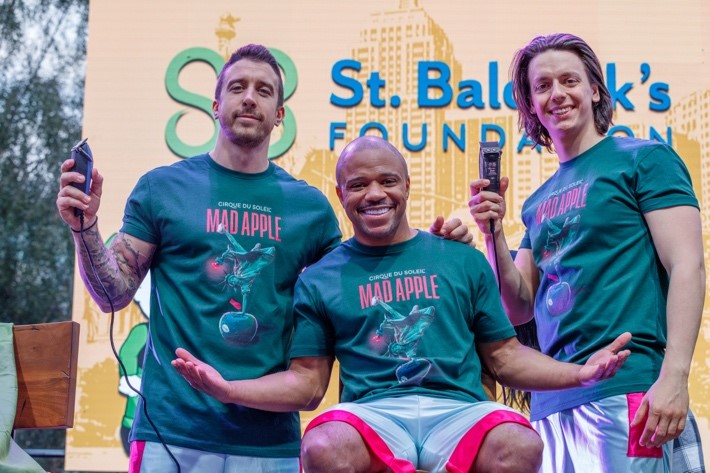 During the charitable event – which raised over $288,000 for St. Baldrick’s Foundation – Mad Apple’s basketball acro-dunkers, Bálint Huszár, Levente Pal and Raymond Butler took the stage as celebrity head shavers. In support of the cause, the trio shaved participants’ heads in front of the live audience. At the end of the night, Butler volunteered to have Huszár and Pal shave his own head to honor the Foundation.

For more than a decade, New York-New York Hotel & Casino has rallied the local community raising millions of dollars for the St. Baldrick’s Foundation, which is a volunteer-driven charity committed to funding the most promising research to find cures for childhood cancer and to give survivors long and healthy lives. Guests of all ages came out to enjoy a fun-filled day on the hotel’s Brooklyn Bridge with live music, celebrity guest head-shavers and more, as participants shed their locks to support St. Baldrick’s.

Huszár, Pal and Butler will perform in Mad Apple as acrobatic slam dunk basketball performers and the show will include a cocktail of music, comedy, magic and mayhem that puts NYC nightlife under the Las Vegas lights. Featuring comedian Brad Williams, freestyle rapper Chris Turner and vocalist Xharlie Black amongst the incredibly talented cast of 39 people, Mad Apple will be a nonstop New York thrill ride from the moment guests enter the theater. From pre-show magic and boozy libations at the stunning stage bar, to the band playing hits inspired by NYC’s most famous musicians and composers, Mad Apple will blur the lines between circus, live entertainment and New York nightlife culture.

Previews for Mad Apple begin on May 12, with tickets starting at $49. Mad Apple will celebrate its premiere May 26; tickets are available for shows beginning May 27 and start at $59. Tickets are now on sale at MadAppleLV.com. 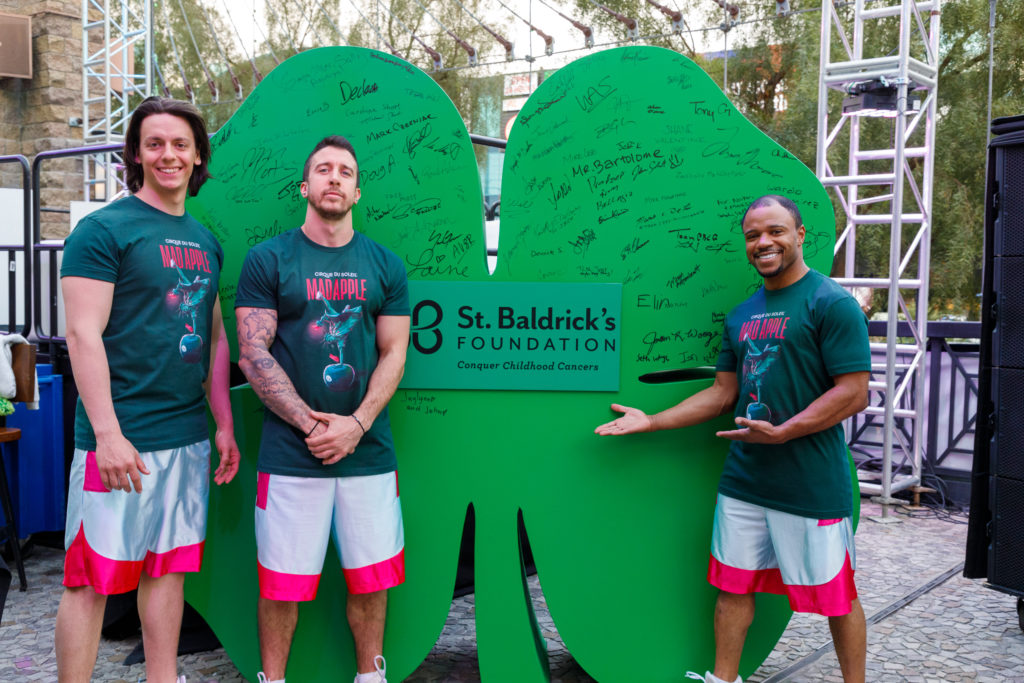 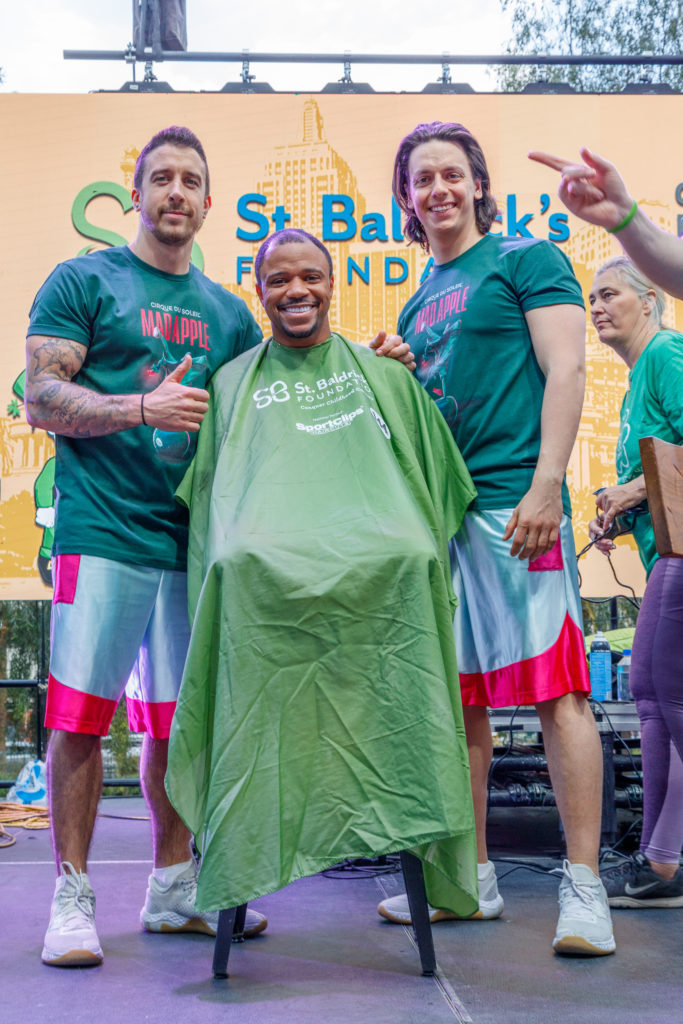 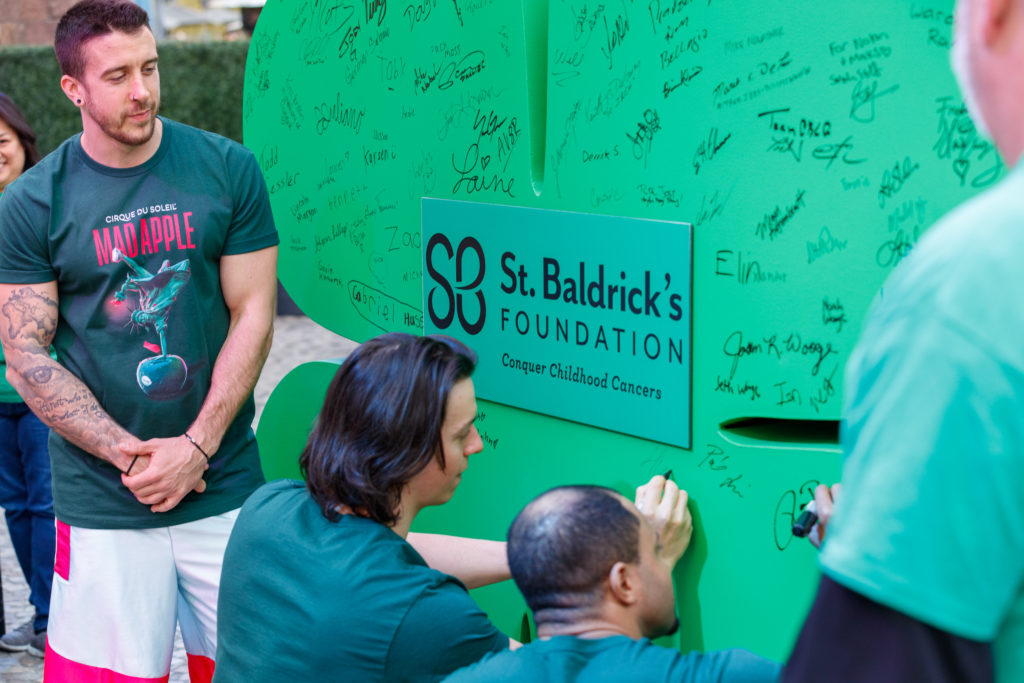 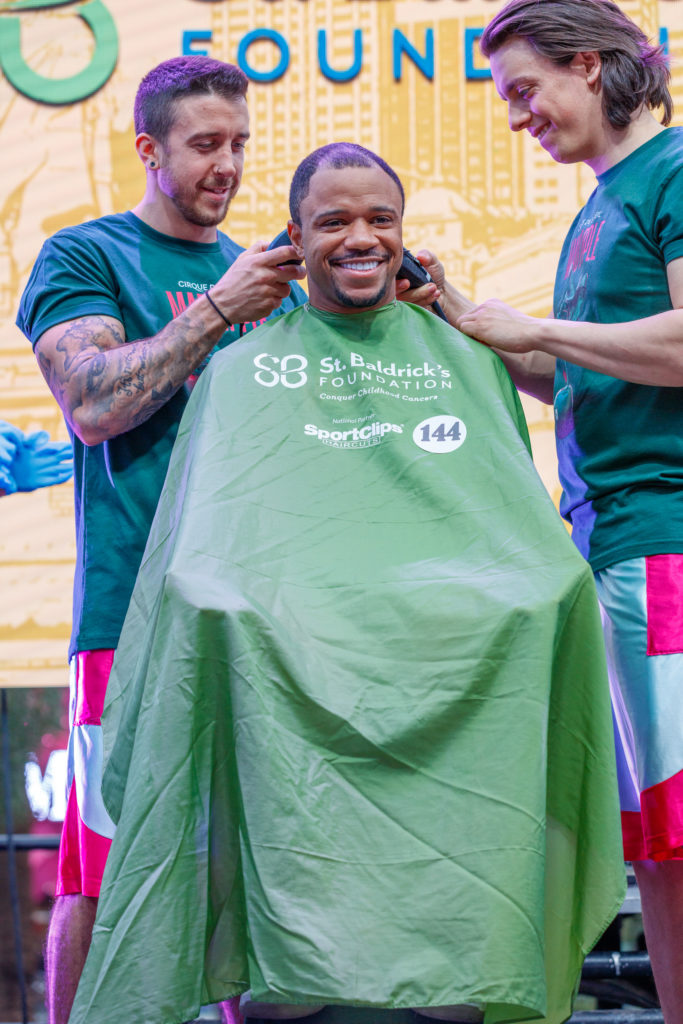 The St. Baldrick’s Foundation is a volunteer-driven charity committed to funding the most promising research to find cures for childhood cancers and give survivors long and healthy lives. St. Baldrick’s coordinates its signature head-shaving events worldwide where participants collect pledges to shave their heads in solidarity with kids with cancer, raising money to fund research. Since 2005, St. Baldrick’s has awarded more than $127 million to support lifesaving research, making the Foundation the largest private funder of childhood cancer research grants. St. Baldrick’s funds are granted to some of the most brilliant childhood cancer research experts in the world and to younger professionals who will be the experts of tomorrow. Funds awarded also enable hundreds of local institutions to participate in national pediatric cancer clinical trials, and the new International Scholar grants train researchers to work in developing countries. For more information about the St. Baldrick’s Foundation please call 1.888.899.BALD or visit StBaldricks.org.

Inspired by the famous energy and landmarks of the iconic original, New York-New York offers all the excitement of the hotel’s namesake, from the thrilling Roller Coaster to tantalizing restaurants including Gallagher’s Steakhouse and Nine Fine Irishmen, an authentic pub offering the best of Irish drink, food and music. In May 2022, New York-New York will become home to Mad Apple, a delicious new, wickedly fun Cirque du Soleil cocktail of music, comedy, magic and mayhem putting NYC nightlife under the Las Vegas lights.  Located adjacent to The Park, New York-New York is home to a selection of Strip-front dining and retail destinations including a two-story flagship Hershey’s Chocolate World, Shake Shack and Tom’s Urban. New York-New York is operated by MGM Resorts International (NYSE: MGM). For more information and reservations, visit newyorknewyork.com, call toll free at (866) 815-4365, or find us on Instagram, Facebook and Twitter.