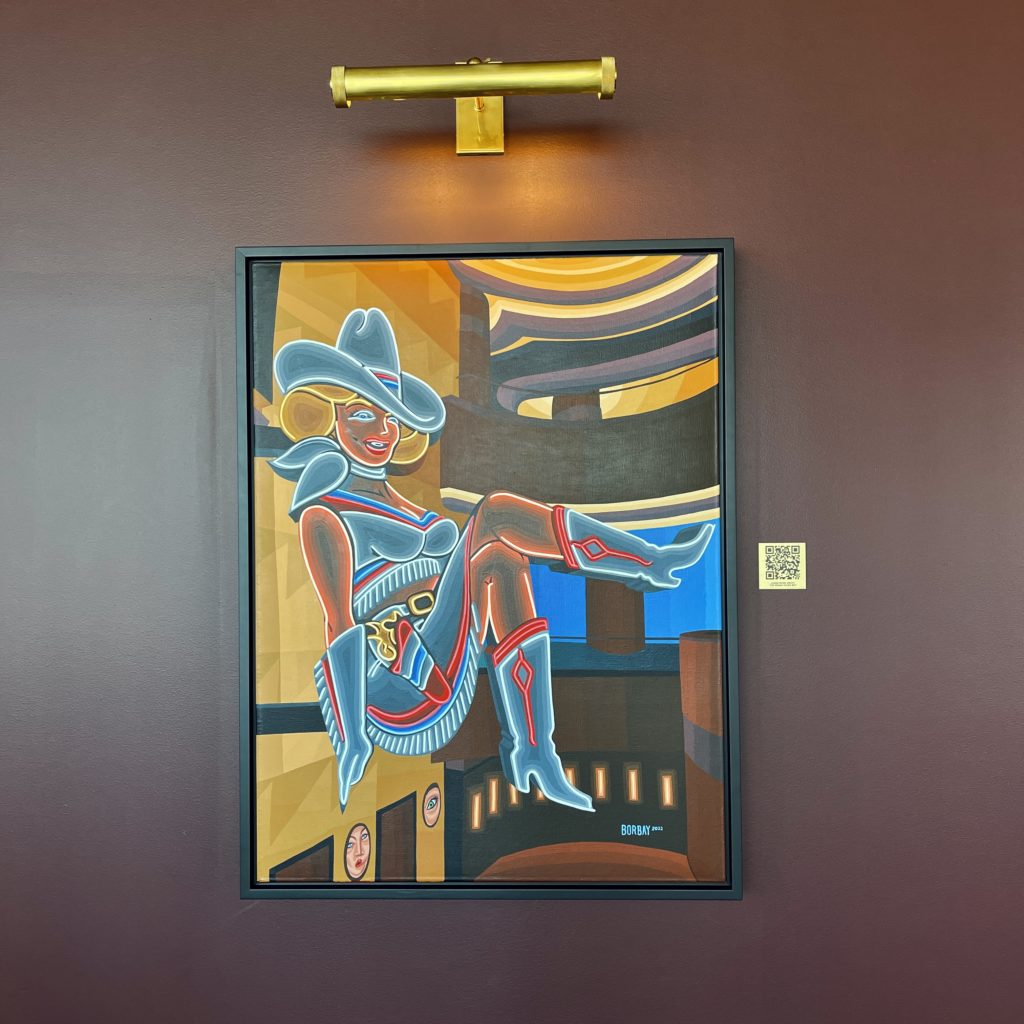 Circa Resort & Casino – downtown Las Vegas’ first adults-only casino –will launch a utility NFT art collection of the famous kicking cowgirl neon sign, Vegas Vickie painted by prolific artist Jason “Borbay” Borbet. Circa will be the first Las Vegas casino to debut an NFT to the blockchain with an NFT collection. The details surrounding the NFT tiers, real-life utility functions and mint date will be announced in the coming weeks.

The NFT will pay homage to Vegas Vickie, a 20-ft. blonde cowgirl neon sign who made her mark on the world-famous Fremont Street Experience in 1980, smiling into the crowds while perched upon Bob Stupak’s Glitter Gulch Casino. Originally designed by Charles F. “Chuck” Barnard, the sign was acquired by Circa’s CEO Derek Stevens in 2016, where she was refurbished by Las Vegas-based sign company YESCO and now lives as a signature art piece in Circa’s lobby.

To kick off the project, Borbay created a painting of Vegas Vickie that will serve as the foundation for the NFT. The neon portrait – which was live painted at Circa throughout the month of February – now lives in the property’s rooftop lounge, Legacy Club and is placed next to a QR code that leads to the NFT landing page with additional details. 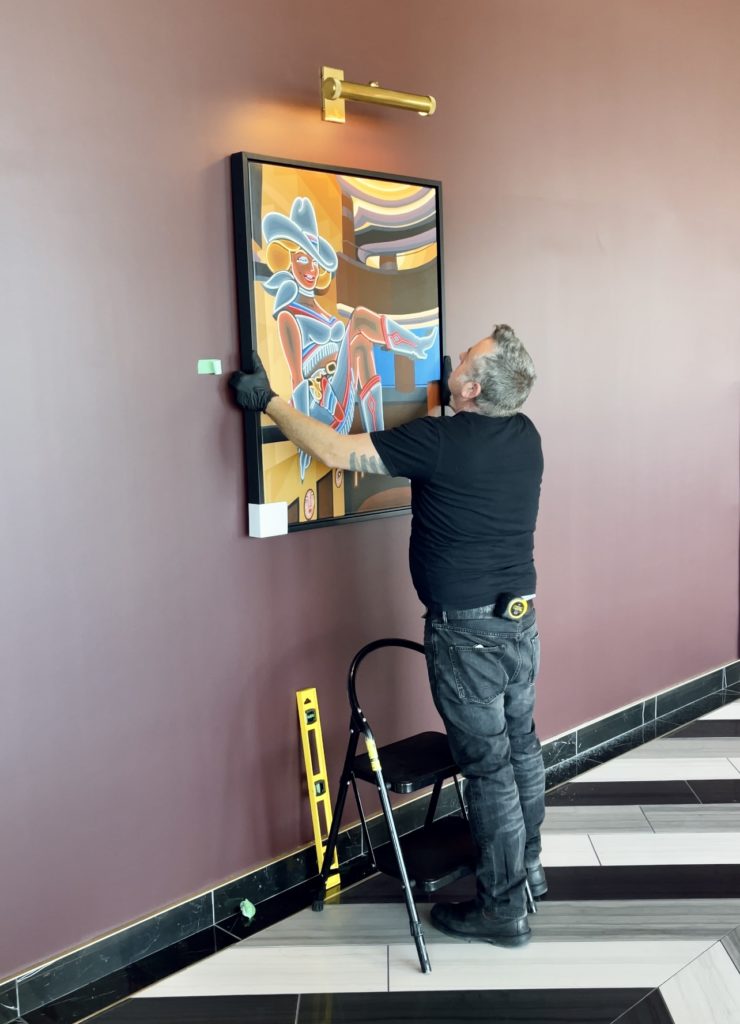 “At Circa, we strive to bring important elements from the past and merge them with what’s new, so to take one of Vegas’ most historic images and turn her into an NFT felt like a lightbulb moment,” said Stevens. “I’ve been passionate about supporting the cryptocurrency community from the beginning. My properties were the first casinos in Vegas to begin accepting Bitcoin eight years ago, and when Borbay approached us regarding the Vegas Vickie NFT, there was no question I wanted to create this very special collection for the NFT community.”

Idaho-based Borbay is a prominent artist, author and entrepreneur who has been painting legendary neon, places and portrait pieces since 2009. A longtime fan of downtown Las Vegas whose work has been featured at The Guggeheim and Universal Hip Hop Museum, Borbay knew he had to be a part of Vegas Vickie’s story the moment he saw her. 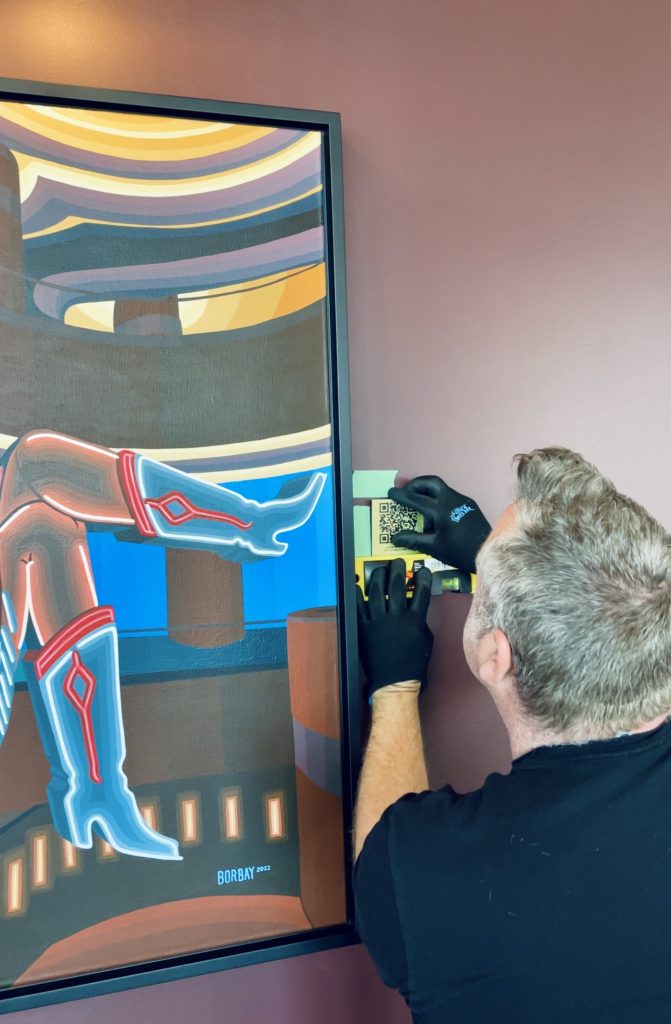 Borbay said, “It was love at first sight when I visited Vegas Vickie in Circa’s lobby. She is a timeless and striking work, and the amount of effort and detail the Circa team put into her refurbishment is astonishing. This collaboration is a community project through and through, and we are excited to educate and empower the NFT space in Las Vegas and beyond.”

How the Vegas Vickie NFT Collection Came to Life

When Borbay was seeking a partner for a Las Vegas NFT project, he knew Stevens had been bullish on two critical items that aligned with his vision: supporting the Bitcoin community and Las Vegas’ burgeoning art scene. Stevens’ other downtown ventures, the D Las Vegas and Golden Gate Hotel & Casino, were the first casinos in Las Vegas to house Bitcoin ATMs and accept it as currency for non-gaming spend. Additionally, Circa was built with art incorporated into its design when it opened in October 2020, as the property features an extensive collection primarily featuring works by local Las Vegas artists.

In March 2021, Borbay approached Circa’s Vice President of Operations Jeff Victor about turning Vegas Vickie into an NFT. Victor had a heavy hand in Vegas Vickie’s restoration, and even married her to fellow downtown Las Vegas neon sign Vegas Vic back in 1994 when he served as president of Fremont Street Experience. Victor loved Borbay’s vision and the road to creating the NFT was born.

Victor said, “When Borbay first approached us about this project, we knew he was onto something special. This is a new chapter in Vegas Vickie’s illustrious history that will honor Vegas’ past, present and future in a bold new way.”

About Circa Resort & Casino

Borbay’s work is collected globally, and has been featured in Forbes, BBC World, Wall Street Journal Japan, Los Angeles Magazine and the New York Post. From Time Out New York Magazine naming him their Most Creative New Yorker, to having original works in the permanent Universal Hip Hop Museum collection, to his 20-year Guggenheim Series – Borbay has been circumventing the art world since 2009.