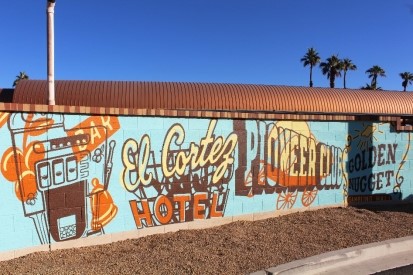 JANUARY HAPPENINGS AT THE MOB MUSEUM, THE UNDERGROUND
SPEAKEASY AND DISTILLERY

The Mob Museum, the National Museum of Organized Crime and Law Enforcement announces a new outdoor art mural, a variety of monthly cocktail specials and tastings and weekly live music in The Underground speakeasy and distillery. The full roster of January happenings follows.

New Outdoor Mural Highlighting Southern Nevada in the 1940s
Date: Daily
Time: Guests can view the mural during the Museum’s operating hours from 9 a.m. to 9 p.m.
Cost: Free
Location: At the north end of the Museum’s west side parking lot.
Description: Made possible by a grant from Nevada Humanities, Mob Museum Advisory Council Member and artist Miguel Hernandez painted a beautiful depiction of Southern Nevada in the 1940s. Throughout this period in Las Vegas history, the city experienced the arrival and growth of the Las Vegas Army Airfield and the Basic Magnesium plant in Henderson, Nevada. The city also underwent major casino development Downtown, including the addition of the El Cortez Hotel & Casino and Golden Nugget Las Vegas which are depicted in the mural. El Rancho Vegas, Hotel Last Frontier and Flamingo Las Vegas, known as Highway 91 at the time, are also incorporated into the artwork.

The mural, available for viewing now, is the first segment of a larger mural. The continuation of the artwork will commence in the coming weeks showcasing Las Vegas predating the 1940s.

Miguel Hernandez is a Las Vegas based artist, originally from Los Angeles. Hernandez began his artistic career as the Zappos resident artist. His artwork has brought him across several states and can be found at the Zappos campus, local businesses, schools, music festivals and various charity events. On May 16, 2016, Mayor Carolyn Goodman dedicated the date as “Miguel Hernandez Day” after Hernandez unveiled a vintage car mural at The Mob Museum.

National Bootlegger’s Day
Date: Monday, Jan. 17 to Sunday, Jan. 23
Time: Available Monday through Wednesday from noon to 10 p.m. and Thursday through Sunday from noon to midnight.
Cost: $12
Location: The Underground speakeasy and distillery
Description: Celebrate National Bootlegger’s Day with a Scofflaw. Made with rye whiskey, dry vermouth, lemon juice, Grenadine and orange bitters, the Scofflaw derives from a 1923 competition to create a new word for a lawless drinker.

Mocktails
Date: Throughout the month of January
Time: Available Monday through Wednesday from noon to 10 p.m. and Thursday through Sunday from noon to midnight.
Location: The Underground speakeasy and distillery
Cost: $7
Description: Prohibition took effect 101 years ago this month. In honor of when liquor was illegal and mobsters made millions, The Underground invites guests to try its signature mocktails. These refreshing, alcohol-free options will make visitors want to go dry, too.

Happy Hour in The Underground
Date: Sunday through Thursday
Time: 5 to 7 p.m.
Location: The Underground speakeasy and distillery
Description: During happy hour, The Underground offers a $2 discount on all craft cocktails, draft beer and wine.

Spend $75 and Receive a Complimentary Souvenir Bottle of Vodka
Date: Throughout the month of January
Time: Available Monday through Wednesday from noon to 10 p.m. and Thursday through Sunday from noon to midnight.
Location: The Underground speakeasy and distillery
Cost: $75
Description: Guests who spend $75 or more on food and drinks in The Underground will take home a free 50mL souvenir bottle of vodka.

ABOUT THE UNDERGROUND
The Underground is an immersive Prohibition history experiential exhibition, featuring a distillery, speakeasy and private VIP room located in the basement of The Mob Museum. Its custom-made, copper-pot still, dubbed “Virginia Still” after mobster Benjamin “Bugsy” Siegel’s notorious girlfriend Virginia Hill, has a capacity of 60 gallons and can serve up to 250 750-mL jars of moonshine per week. The Underground also brews and serves craft beer onsite. Artifacts from the 1920s and 1930s on display tell the intriguing story of the Prohibition era, which not only saw a proliferation of bootlegged booze and the meteoric growth of organized crime outfits, but also had a profound, lasting impact on society and culture. Complimentary entrance to The Underground is granted at the secret side entrance to visitors who know the correct password, which is published daily on Instagram Stories @MobMuseum_Underground.

ABOUT THE MOB MUSEUM
The Mob Museum, the National Museum of Organized Crime and Law Enforcement, a 501(c)(3) non-profit organization, provides a world-class journey through true stories—from the birth of the Mob to today’s headlines. The Mob Museum offers a provocative, contemporary look at these topics through hundreds of artifacts and immersive storylines. Numerous interactive exhibits include a Crime Lab, Firearm Training Simulator and Organized Crime Today exhibit. The Museum is also home to The Underground, a Prohibition history exhibition featuring a speakeasy and distillery. The Mob Museum has accumulated numerous accolades, including being named one of TripAdvisor’s “Top 25 U.S. Museums;” one of Las Vegas Weekly’s “Twenty Greatest Attractions in Las Vegas History” and  “Best Museum” by its 2021 Readers’ Choice Awards; one of National Geographic’s “Top 10 Things to Do in Las Vegas;” USA Today’s “Best Museum in Nevada,” 10Best Readers’ Choice travel awards for “Best Las Vegas Attraction” in 2021, “Top Five Best History Museums in the United States” in 2021 and one of its “12 Can’t Miss U.S. Museum Exhibits;” named “A Must for Travelers” by The New York Times and one of “20 Places Every American Should See” by FOX News. The Museum is a two-time winner of the Mayor’s Urban Design Award for Historic Preservation and Adaptive Reuse and is accredited by the American Alliance of Museums. The Museum is open daily; visit the website for admission rates and operating hours. For more information, call (702) 229-2734, visit themobmuseum.org, or download the Museum’s free mobile app.