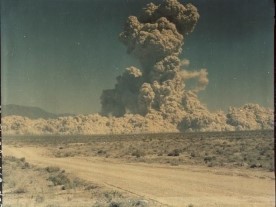 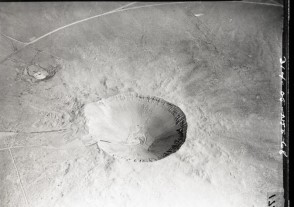 To commemorate the 60-year anniversary of the formation of the Sedan Crater, the largest man-made crater in the United States created on July 6, 1962, the National Atomic Testing Museum (NATM) will host a roundtable discussion on Saturday, July 30 from 10 to 11:30 a.m. Guests are invited to learn more about one of the most significant blasts in atomic testing history and the crater that formed as a result. During the event, three former Nevada Test Site employees and current trustees for the Nevada Test Site Historical Foundation will share their remembrances about Sedan and answer moderator-led questions. Attendees will then have the exclusive opportunity to enjoy breakfast with the speakers and ask their own questions at this casual meet and greet.

The Sedan Crater was created in the former Nevada Test Site as part of the United States’ Plowshare Program – a research and development project created to explore the technical and economic feasibility of using nuclear explosives for peaceful purposes in industrial applications.

The U.S. Atomic Energy Commission, predecessor of the U.S. Department of Energy, conducted the excavation experiment using a 104-kiloton thermonuclear device detonated 635 feet underground. The explosion displaced about 12 million tons of earth, creating a crater 1,280 feet in diameter and 320 feet deep. The force of the detonation also released seismic energy equivalent to an earthquake with a magnitude of 4.75 of the Richter Scale.

Decades later on April 1, 1994, the Sedan Crater was officially added to the National Register of Historic Places. The Nevada National Security Site, formerly known as the Nevada Test Site, has also offered general interest tours of the Sedan Crater in past years to thousands of tourists from across the country.

Tickets to the roundtable discussion are $10 for general admission, $5 for students with valid IDs and free for museum members. For more information and to register for the event, click here.

ABOUT NATIONAL ATOMIC TESTING MUSEUM
The National Atomic Testing Museum (NATM) is operated and maintained by its parent company, the Nevada Test Site Historical Foundation (NTSHF), an IRS 501(c)3 charitable, non-profit organization chartered in Nevada. NATM is one of 37 museums designated as an Affiliate Partner of the Smithsonian Institution and is a repository for one of the most comprehensive collections of nuclear history in the world. Covering nuclear history beginning with the first test at the Nevada Test Site on January 27, 1951, NATM’s exhibitions and programming also address current affairs related to the nuclear industry.  For more information, go to www.nationalatomictestingmuseum.org and follow on Facebook, Instagram and Twitter.