Backstreet Boys Take Over Drai’s Beachclub atop The Cromwell, July 2

Yesterday (July 2, 2017), the best-selling boy band of all-time, Backstreet Boys took over Drai’s Beachclub atop The Cromwell in Las Vegas for an unforgettable Independence Day Weekend celebration featuring a thrilling set by resident artist DJ Franzen. Pop juggernauts AJ McLean, Brian Littrell, Kevin Richardson and Howie Dorough spent the afternoon celebrating the conclusion of the second leg of their sold-out Planet Hollywood Resort & Casino residency by partying poolside with fans at the rooftop oasis. Throughout the afternoon, the guys took time to greet fans and sign autographs, and delivered a toast to a wild summer before leading partygoers in a sing-along of their GRAMMY-nominated hit “I Want It That Way.” Drai’s LIVE resident artist Wiz Khalifa took part in the sky-high revelry, surprising partygoers by taking the stage later in the day. Actress Billie Lourd, daughter of the late Carrie Fisher, was also seen soaking up the sun alongside friend and fellow actor Austen Rydell at a private bungalow.

Strategically located at the corner of Las Vegas Blvd. and Flamingo Blvd. on the rooftop of Caesars Entertainment’s new 188-room boutique hotel The Cromwell, Drai’s Beachclub • Nightclub takes entertainment and nightlife to new heights.  The Strip’s only rooftop Beachclub includes multiple pools shaded by 10 towering palm trees, a variety of cabanas and bungalows, two full-service bars and a gourmet kitchen. Drai’s Nightclub is a dazzling, multi-level club with an expansive dance floor, massive LED lighting systems, and modern technology featuring more than 7,000 square feet of the most state of the art high definition LEDs in production, including a towering 80-sided LED disco ball – the only one of its kind, and the opportunity to detonate custom rooftop firework shows.  Additionally, the legendary Drai’s After Hours is back in its original location for its 20th year.   For more information, visit Draislv.com and follow Drai’s on Facebook, Twitter and Instagram – @draislv.

The night kicked off as band members Nick Carter, Howie Dorough and Kevin Richardson allowed 150 lucky fans to quit playing games with their heart during a special meet and greet at the property’s small, intimate music venue, Vinyl. The boys then proceeded to Body English Nightclub & Afterhours where they were welcomed by a full-house of supporters. Carter, Dorough and Richardson immediately hit the stage to thank everyone for coming out and chanted “ain’t no party like a Backstreet party, because a Backstreet party don’t stop” as the crowd sang along.

The “larger than life” event continued as Carter took over the DJ booth for an exclusive one-hour set. Dorough and Richardson joined their fellow band member on stage as they pulled several girls up and posed for pictures with partygoers. Carter’s beats had the nightclub bumpin’ as he played popular hits such as “I Got A Feeling,” by The Black Eyed Peas; “Whatever You Like,” by T.I.; “This Is How We Do It,” by Montell Jordan, and many more. The boys proved that Backstreet’s back, alright with the energetic set while dancing, singing and encouraging fans to rock their bodies right throughout the rest of the evening.

It was a night that had to be seen to be believed as two internationally-famed music groups, New Kids on the Block and Backstreet Boys, did some after-concert shopping inside Sugar Factory ( www.SugarFactory.com ) at Paris Las Vegas last night.

NKOTB enjoyed scooping up sweet treats as they scoured the candy walls for the perfect sugar kick. The shop was crowded with screaming fans, scurrying to get a quick picture of the heartthrobs.

Nick Carter and Howie Dorough from BSB loved the black and blue Couture Pops, especially since “Black and Blue” was the name of one of their best-selling albums. The pair couldn’t resist sampling Sugar Factory’s scrumptious gelato, and picking out two five-pound gummy bears before heading to the red carpet.

The group members seemed unfazed by the crowds of screaming fans and were excited for all the candy selection in one store. But, being the true charmers they are, they made sure to take pictures with a few lucky fans. It was a sweet night for the store and an even sweeter night for the lucky shoppers that caught a glimpse of the megastars.

The Sugar Factory brand has become an instant hit across the country – offering everyone a sweet escape. Sugar Factory currently has stores located at The Mirage Resort and Casino, and Miracle Mile Shops inside Planet Hollywood Resort & Casino. Sugar Factory’s flagship location and biggest store can be found at Paris Las Vegas. For more information please visit www.SugarFactory.com, follow on Twitter at www.twitter.com/SugarFactory and friend on Facebook at facebook.sugarfactory.com. 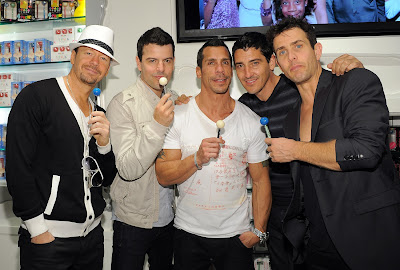 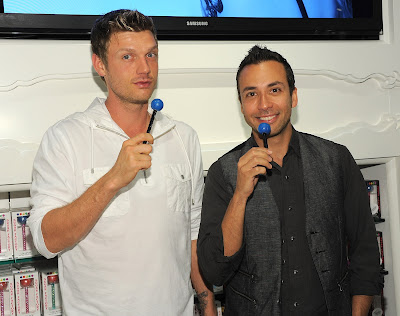 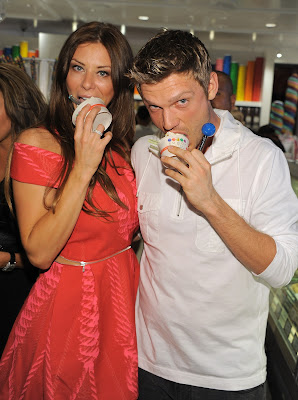