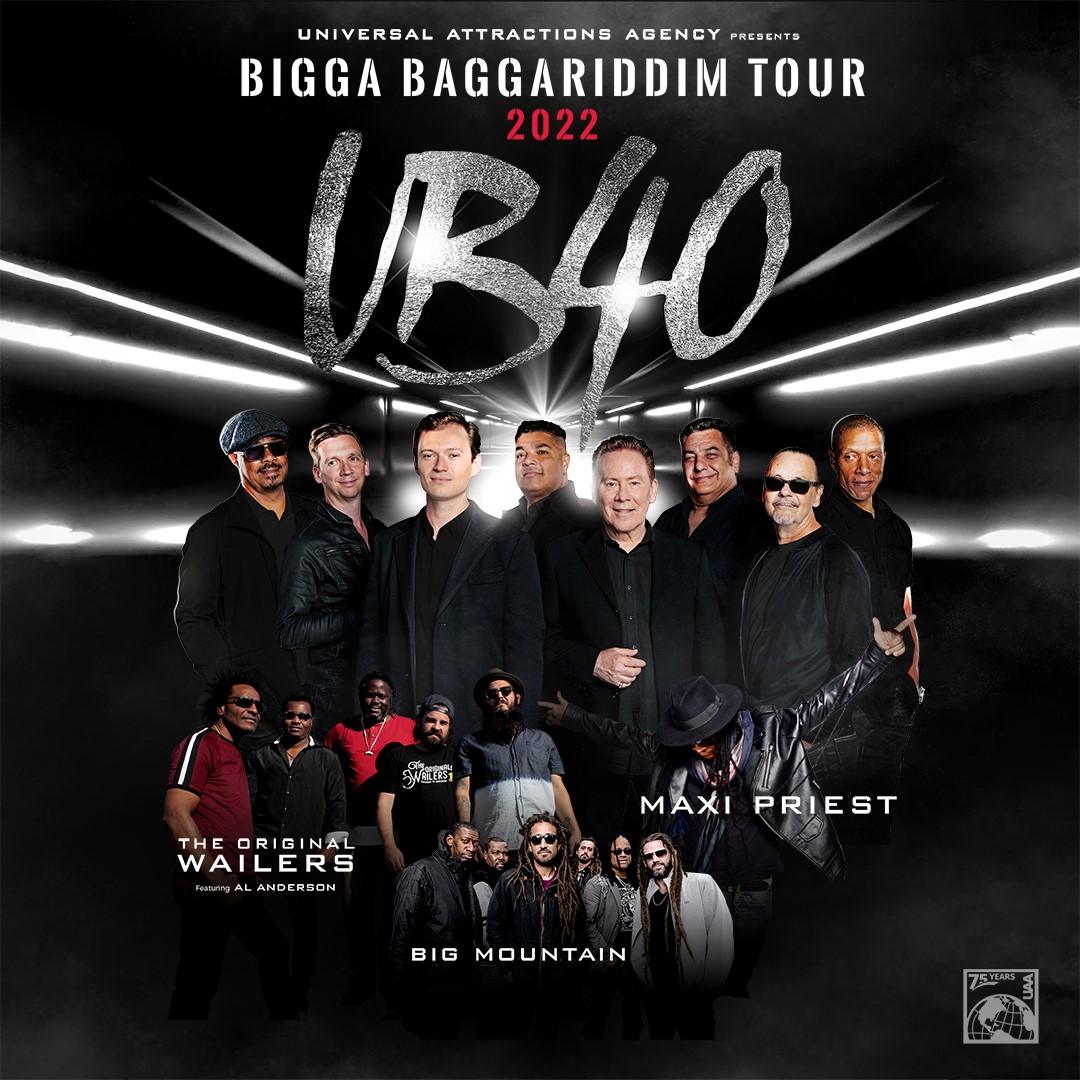 The Bigga Baggariddim Tour featuring UB40, The Original Wailers featuring Al Anderson, Maxi Priest and Big Mountain is making a stop at Sunset Station on Saturday, Sept. 24, 2022. Performed under the stars at the Sunset Amphitheater, tickets for Bigga Baggariddim Tour start at $35 plus applicable fees and go on sale Friday, July 8, 2022 at 10 a.m.

With massive hits like “Red Red Wine” and “Can’t Help Falling in Love With You,” UB40 became one of the biggest names not only in reggae but in pop music in the 1980s and ’90s. The Wailers rewrote the history books as Bob Marley’s band, and today under leader Aston Barrett Jr. they carry the flame for the past and light the way forward. Maxi Priest scored huge hits like “Close to You” by bringing together the sounds of reggae with R&B, while Big Mountain’s cover of “Baby, I Love Your Way” brought their sun-soaked sound to the masses.

In 1974 when Bob Marley went solo, on the brink of international stardom, he surprised the music community by choosing as American born lead guitarist, Al Anderson. It was Anderson’s stunning lead work on such classics as No Woman, No Cry, & Three O’clock Road Block, that first alerted rock fans to the Wailer’s music. Andersons’ musical achievements with Bob Marley & The Wailers include the platinum award winning albums, ‘Live at the Lyceum’, ‘Babylon by Bus’ and ten times platinum album ‘Legend’. The Orignal Wailers received their own Grammy nomination in 2013 for their album ‘Miracle’ making it Andersons’ second Grammy Nomination. Al Anderson is the sole member of the Bob Marley & The Wailers mid – 1970’s lineup in the Original Wailers. The Original Wailers also include Chet Samuel (Lead Vocals / Guitar), Omar Lopez (Bass Guitar), Paapa Nyarkoh (Drums), and Adrian AK Cisneros (Keyboards and Organ) who continue the legacy of Bob Marley & The Wailers’ music.

Music insiders would have you believe that there are a variety of musical genres and categories, and that common ground is few and far between. However, the bottom line is that people embrace music and rhythms that mean something to them, no matter what their background. As Maxi Priest knows, music is universal. Over the course of 10 albums and countless live performances all over the globe, Maxi has unleashed a one-world music that heals, rejuvenates and uplifts. Since his 1988 debut, Maxi has enjoyed tremendous success as a singer with popularity and recognition around the world. In fact, he is the most successful reggae solo artist in the world, second only to legend Bob Marley. He has enjoyed numerous worldwide hits as well as a Number one pop chart smash and is widely credited with helping spread the gospel of reggae and Caribbean music.

Much like UB40, American reggae band Big Mountain brought a very commercialized version of Jamaican music to the American mainstream when their cover of Peter Frampton’s “Baby, I Love Your Way” reached the Top Ten in early 1994. To the band’s credit, though, its three albums contain reggae roots music combined with only several R&B-ish covers, and the lineup includes two Jamaicans with excellent credentials: rhythm guitarist Tony Chin and drummer Santa Davis — both of whom played with Peter Tosh’s band and the Soul Syndicate.

Al Anderson, Maxi Priest and Big Mountain are $35 and $55 plus applicable fees for standing room only. Guests under 18 must be accompanied by an adult. All tickets go on sale Friday, July 8, 2022 at 10 a.m. and can be purchased at any Station Casinos Reward Center www.stationcasinoslive.com or through Ticketmaster at www.ticketmaster.com.