7 p.m. game to be played at Michelob Ultra Arena on the Las Vegas Strip as National Finals Rodeo occupies the Thomas & Mack Center 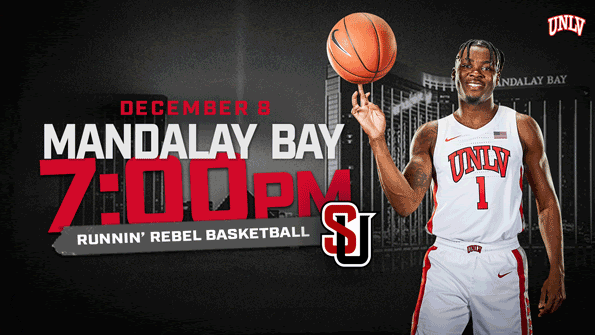 As the National Finals Rodeo is currently occupying the Thomas & Mack Center, the UNLV men’s basketball team will face Seattle at Mandalay Bay’s Michelob Ultra Arena on the Las Vegas Strip on Wednesday, Dec. 8 at 7 p.m.

After starting the season with three straight home wins, the Runnin’ Rebels (4-5) have dropped five of their last six games, however during that stretch they have faced two top-five teams in then-No. 4 Michigan and then-No. 2 UCLA and three other top-100 squads (according to KenPom) in San Francisco (32), Wichita State (56) and SMU (78).

Senior guard Bryce Hamilton leads the Runnin’ Rebels in scoring at 16.1 points per game, with junior forward Donovan Williams second at 10.0 ppg. Senior forward Royce Hamm Jr. is second in the Mountain West in rebounding with 9.6 per contest (13th in the country) and is also averaging 8.7 ppg and 1.0 bpg. Senior guard Jordan McCabe leads the team in assists at 3.9 apg (eighth in the MW) and is second in the conference and 11th in the country in assist/turnover ratio (4.4).

The returners include senior guards Hamilton and Marvin Coleman and the 15-man roster includes 13 upperclassmen. Hamilton was selected to the 2021-22 Preseason All-Mountain West Team in October. Initially declaring for the 2021 NBA Draft, the second-team All-MW honoree last season who led the Runnin’ Rebels in scoring with 17.9 points per game decided to return to the program.

Seattle (7-2) had won six straight games before losing its most recent contest to VMI (89-82) on Sunday. Each of its last seven games were at home. The Redhawks have three players averaging double figures in scoring, led by Cameron Tyson (16.6 ppg). He also is the team’s leading rebounder at 6.0 rpg, while Darrion Trammell is the squad’s assist leader (5.8 apg, 20th in the nation). Seattle is 12th in the country in 3-pointers made per game with 11.2.

Wednesday’s game will be broadcast on the Runnin’ Rebels’ YouTube channel with Tony Cordasco and Donovan Stewart calling the action. Jon Sandler, former Runnin’ Rebel Curtis Terry and Steve Cofield (sidelines) will handle the UNLV radio call, which may be heard live on ESPN Radio 1100 in Las Vegas. All streaming links and live stats are available at UNLVRebels.com.

Tickets may be purchased at RunninRebelsOnTheStrip.com.