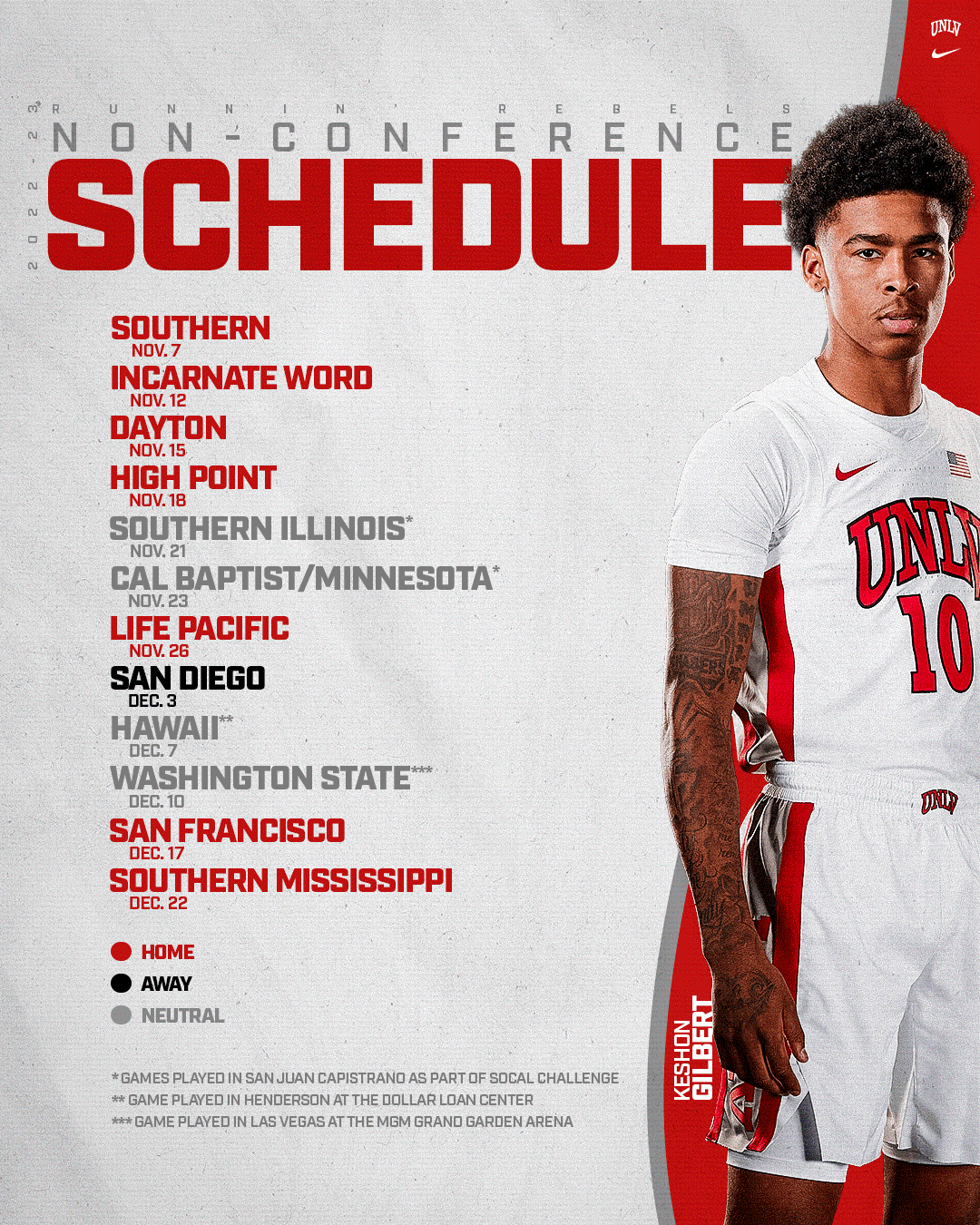 The 12-game slate includes seven home games at the Thomas & Mack Center on UNLV’s campus and two more in the Las Vegas area. The Mountain West schedule, along with television appearances and game times will be announced at a later date.

Ticket prices for the upcoming season have been adjusted with affordability and family friendly value at the forefront of the changes. For more information and to purchase, visit UNLVtickets.com or call 702-739-FANS (3267).

The 2022-23 Runnin’ Rebel campaign will begin with four straight home games in November. UNLV will open the season against Southern on Monday, Nov. 7, Incarnate Word on Saturday, Nov. 12, Dayton on Tuesday, Nov. 15 and High Point on Friday, Nov. 18. Dayton tied for second place last season in the Atlantic 10 Conference with a 24-11 overall record and a 14-4 league mark, advancing to the second round of the NIT.

UNLV will embark on its first regular-season road trip of the season as it competes in the SoCal Challenge in San Juan Capistrano, California, on Monday and Wednesday, Nov. 21 and 23. The Runnin’ Rebels will open the event against Southern Illinois and then face either Minnesota from the Big Ten or Cal Baptist. The Lancers appeared in the CBI in March.

The Runnin’ Rebels return home to the Thomas & Mack Center for a game against Life Pacific on Saturday, Nov. 26, before heading back out of town for a true road game at San Diego on Saturday, December 3.

While the National Finals Rodeo is held at the Thomas & Mack Center, the Runnin’ Rebels will play a game in Henderson for the first time in their history, as they take on Hawaii on Wednesday, Dec. 7 at the new Dollar Loan Center.

UNLV will then stay in Las Vegas and play at the MGM Grand Garden Arena on Saturday, Dec. 10 against Washington State from the Pac-12. The Cougars finished fifth in their conference’s standings last season, advancing to the semifinals of the NIT in New York.

The Runnin’ Rebels will return back home to the TMC to wrap up non-conference play with two games – Saturday, Dec. 17 against San Francisco and Thursday, Dec. 22 against Southern Mississippi. USF qualified for the NCAA Tournament in March, finishing the year with a 24-10 overall record.

The game at the MGM Grand Garden Arena is NOT included in the season ticket package. Ticket information for that date will be available soon.