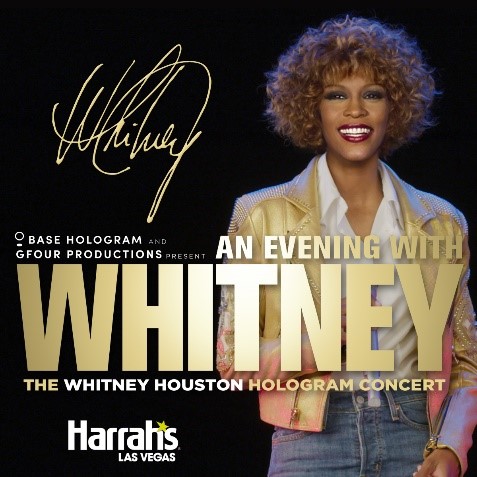 AN EVENING WITH WHITNEY: THE WHITNEY HOUSTON HOLOGRAM CONCERT
CELEBRATES 35TH ANNIVERSARY OF “I WANNA DANCE WITH SOMEBODY,” MAY 2
Showgoers Can Enjoy a Theatrical Experience Filled with Whitney’s Greatest Hits

AN EVENING WITH WHITNEY: THE WHITNEY HOUSTON HOLOGRAM CONCERT, the brand new, revolutionary entertainment experience at Harrah’s Las Vegas, celebrates Whitney Houston and the anniversary of her legendary chart-topper “I Wanna Dance With Somebody,” released on May 2, 1987. The Whitney Houston Hologram Concert honors Whitney’s smash records and preserves her legacy through an authentic, larger-than-life hologram surrounded by a live band and vibrant dancers set to the sounds of the Grammy Award-winning superstar’s iconic pipes with never-before-released vocal tracks. 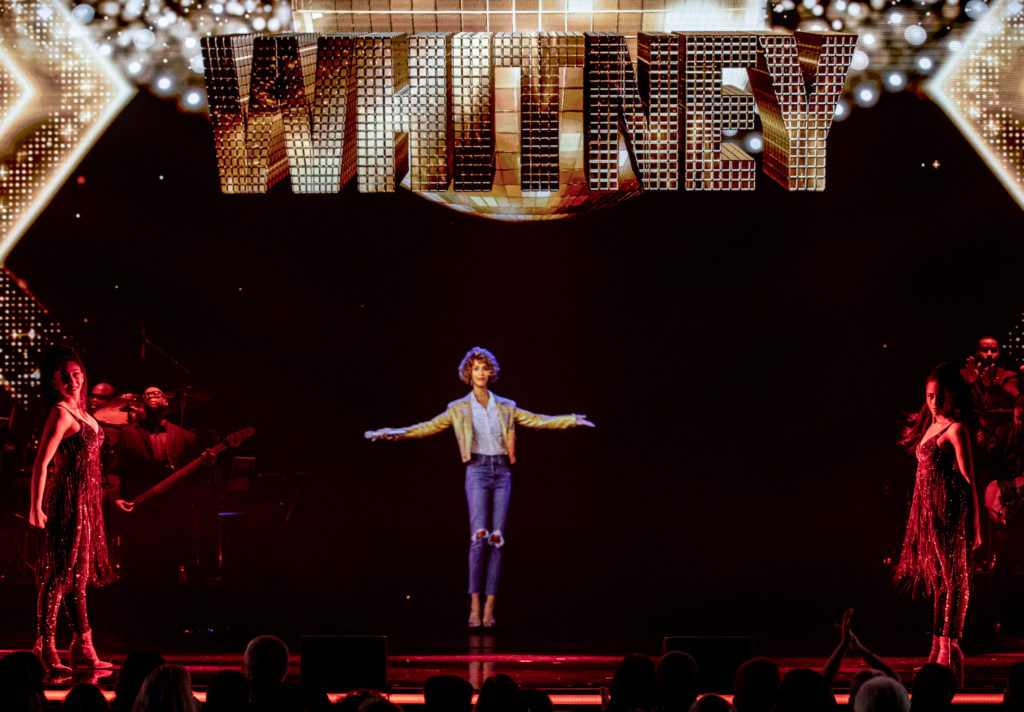 Audiences are immersed into an intimate evening while being enveloped by state-of-the-art technology and innovative visuals. The show was written by and features creative direction by internationally known creator Mark ‘Swany’ Swanhart whose credits include NBC’s Little Big Shots, NBC’s Bring the Funny, CBS’ The World’s Best, ITV’s Britain’s Got Talent and America’s Next Big Deal for NBCUniversal. The production was musically directed by Keith Harris, one of pop culture’s most influential creatives. Harris’ vision underscores his remarkable musical expertise, resulting in the most authentic Whitney Houston concert showgoers can experience. 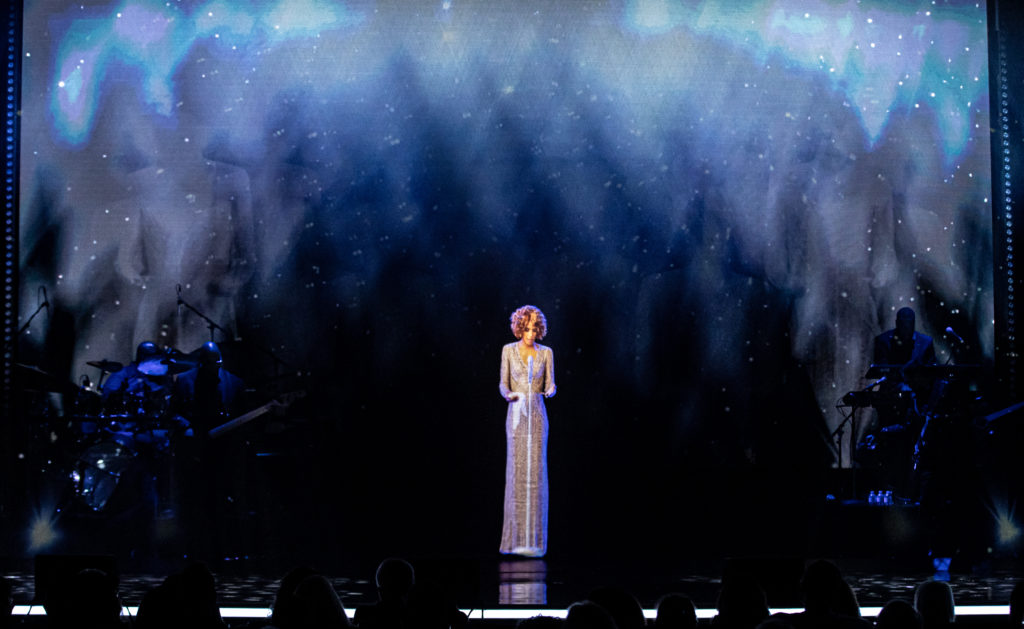 AN EVENING WITH WHITNEY performs Tuesday through Sunday at 6 p.m. inside the Harrah’s Showroom at Harrah’s Las Vegas and at 8 p.m. on select performance days, with no shows on Monday. For tickets and more information, visit WhitneyVegas.com.

BASE Entertainment develops, creates, and manages live entertainment productions and venues in North America and worldwide.  In addition to An Evening with Whitney: The Whitney Houston Hologram Concert, BASE’s current projects in Las Vegas include Criss Angel MINDFREAK at Planet Hollywood Resort & Casino and MAGIC MIKE LIVE Las Vegas at SAHARA Las Vegas.  Past productions in Las Vegas include Absinthe at Caesars Palace, Jersey Boys at the Palazzo, Phantom – The Las Vegas Spectacular at the Venetian, Rock of Ages at the Venetian, Peepshow at Planet Hollywood, Mat Franco: Magic Reinvented Nightly at the LINQ Hotel & Casino, Million Dollar Quartet at Harrah’s, Wayne Brady at the Venetian and Stomp Out Loud at Planet Hollywood, among others.  For more information, please visit BASEentertainment.com.

Proud producers of some of the world’s highest caliber shows, from Broadway to the West End. Current Broadway productions and investments include: TINA: THE TINA TURNER MUSICAL, THE BOOK OF MORMON, SIX THE MUSICAL opening in October 2021, and AMERICAN BUFFALO opening in April 2022 starring Sam Rockwell, Laurence Fishburne and Darren Criss. Current U.S. tours include THE PLAY THAT GOES WRONG (also re-opening Off-Broadway), and the Tony Award®-nominated FIDDLER ON THE ROOF. They are producers of the first U.K. tour of the award-winning West End production of DREAMGIRLS. Other highlights include winning the 2013 Tony Award® for their production of WHO’S AFRAID OF VIRGINIA WOOLF; co-financing the 5-time Tony Award® winner for Best Musical, MATILDA THE MUSICAL; producing 9 TO 5 THE MUSICAL with music and lyrics by Dolly Parton; and producing AMERICAN SON starring Kerry Washington, which was recently adapted for Netflix. They are currently Tony Award nominees for THE INHERITANCE and TINA: THE TINA TURNER MUSICAL. Their combined shows have been nominated for 123 Tony Awards®, winning 44 and 110 Drama Desk Awards, winning 56. Their smash hit MENOPAUSE THE MUSICAL®, now in its 20th year including 14 years as the longest-running musical in Las Vegas history. It can be seen nightly at Harrah’s Hotel and Casino on the Las Vegas strip as well as on tour in the U.S, Australia, Canada, Europe and New Zealand. Their newest play, MIDDLETOWN® by Dan Clancy has performed in Las Vegas, Chicago, Atlanta and will continue its national tour this year. For more information, visit GFourProductions.com

A hidden gem in the heart of the Strip, Harrah’s Las Vegas features 2,542 redesigned guest rooms, a remodeled casino floor and direct access to CAESARS FORUM Conference Center. The renovated hotel rooms and suites feature bold purple and blue hues that complement the cream-colored décor, dark wood accents and contemporary fixtures. The resort offers 87,000 square feet of casino space, the Caesars Race & Sportsbook at Harrah’s Las Vegas, The Spa at Harrah’s Las Vegas and more than 25,000 square feet of meeting and convention space. Dining options encompass everything from PizzaCake by Buddy Valastro, to the chef-driven Fulton Street Food Hall – with a new location of Bobby’s Burgers by acclaimed Chef Bobby Flay – to the upscale setting of Ruth’s Chris Steak House, a romantic venue with breathtaking views of The Strip. Harrah’s outdoor bar, Carnaval Court, brings high energy to the Las Vegas Strip with live music and some of the world’s top flair bartenders who juggle and pour to perfection. A wide variety of entertainment options include the first-ever solo residency from Donny Osmond, as well as AGT’s Tape Face, Menopause the Musical, X Country and “An Evening with Whitney: The Whitney Houston Hologram Concert.” Harrah’s Las Vegas is operated by a subsidiary of Caesars Entertainment, Inc. (NASDAQ: CZR). For more information, please visit harrahslasvegas.com or the Caesars Entertainment Las Vegas media room. Find Harrah’s Las Vegas on Facebook and follow on Twitter and Instagram. Must be 21 or older to gamble. Know When To Stop Before You Start.® If you or someone you know has a gambling problem, crisis counseling and referral services can be accessed by calling 1-800-522-4700 ©2021, Caesars License Company, LLC.