BLU DETIGER TO PERFORM AT THE ICONIC SAND DOLLAR DOWNTOWN AT THE PLAZA HOTEL & CASINO, AS PART OF OFFICIAL LIFE IS BEAUTIFUL AFTER-PARTY 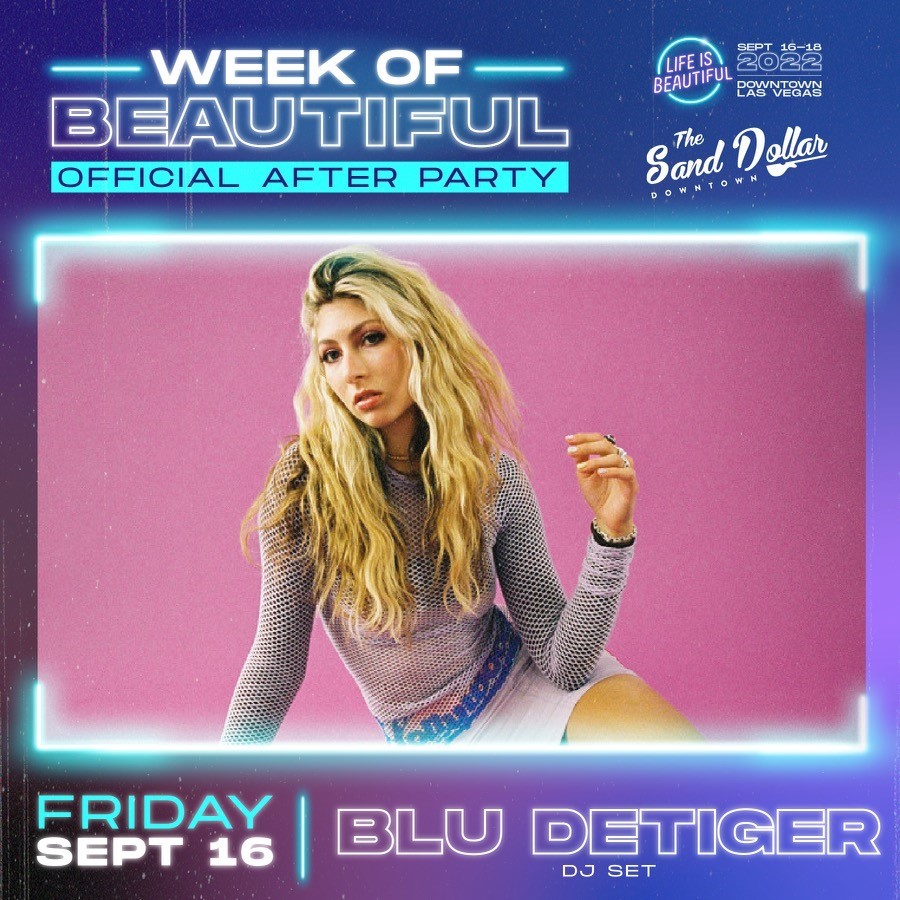 Renowned singer-songwriter, bass player, producer, and DJ Blu DeTiger is bringing her unique sound to The Sand Dollar Downtown at the Plaza Hotel & Casino. Performing as part of the official Life is Beautiful “Week of Beautiful” after-party, DeTiger will perform a live DJ set Friday, Sept. 16, 2022 at 1:30 a.m. Cover is $10 at the door and guests must be 21 years or older.

Bass prodigy and burgeoning pop icon Blu DeTiger was born and raised in NYC. Drawn to the bass early on, she took the stage at CBGB, prior to the iconic club’s closing, when she was only seven. By 17, she was a staple in the city’s creative scene. While playing in a multitude of bands, she also distinguished herself as a DJ, playing live bass during her sets and getting the crowd dancing, whether at a techno rave in Brooklyn or a high-profile fashion event. Blu attended NYU Tisch Clive Davis for two years. By early 2020, while also writing and producing her own music, Blu was cutting her teeth touring around the world with a variety of artists. Blu released her debut EP in 2020 and has since racked up over 120 million global streams to date.

Blu’s undeniable bass talent is consistently sought after. You can often find her shredding as a special guest for artists, friends, and collaborators, or adding her bass playing to records. Blu has performed with Dominic Fike, Caroline Polachek, Chromeo, Bleachers, and Fletcher to name a few. After catching Jack Antonoff’s eye, she played “Saturday Night Live” with Bleachers and joined him at Bonnaroo’s Superjam. She was one of the special guests in Olivia Rodrigo’s “Driving Home 2 U” film on Disney+, and has garnered attention from many industry legends, including Timbaland, Janet Jackson and Questlove.

She has over 1.2 million TikTok followers to date — largely due to her bass videos that have inspired so many to take up the instrument themselves. Her musicianship and inspiring personality have been spotlighted in campaigns for such brands as DKNY, Levi’s, Smashbox, American Eagle. A member of Fender’s Next Class of 2021, she was also tapped to star in the campaign for Fender’s new Player Plus series. Blu was on the cover of Bass Player Magazine and is working closely with Fender for many more upcoming projects.

About The Sand Dollar Lounge
Originally opened as a blues bar in 1976, The Sand Dollar quickly became a draw for iconic musicians including Muddy Waters, B.B. King, and even Mick Jagger over its first 30 years. Hit by hard times, The Sand Dollar closed its doors in 2013, but its spirit would not let it rest and within two years the Chinatown-adjacent bar was purchased and reignited by hospitality veterans Anthony Jamison and Nathan Grates. Honoring the tradition and history of the iconic Las Vegas venue, The Sand Dollar Lounge has reclaimed its beloved spot as a premier live music venue with free entertainment nightly, adding rotating craft beer selections, an extensive whiskey collection, seasonal craft cocktails by some of the city’s best bartenders, an amazing pizza kitchen, and table-top gaming in a smoke-free environment. In 2022, the iconic blues bar opened its second location in Las Vegas, located at The Plaza Hotel & Casino